Just stop doing that, will ya? 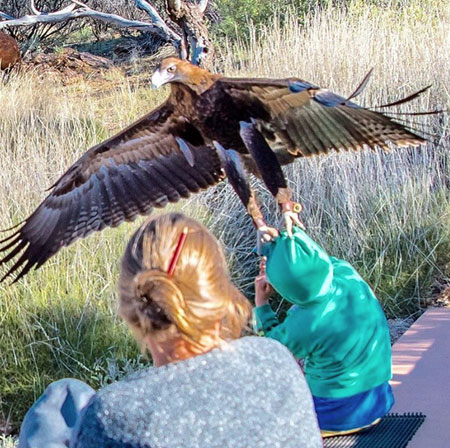 “I hear that both boy and eagle are well, which I’m happy about,” says Stephen Schwer, CEO of Tourism Central Australia, who took time off on the weekend from restoring his backyard veggie garden after the hail to respond to our request for comment.

The eagle concerned is the star performer at the Desert Park and the boy, well, he’s the kid who probably irritated the majestic bird (and probably people in the audience) by pulling his jacket zipper up and down repeatedly.

At least so goes speculation published in – no less – the National Geographic where this photo appeared.

The story took the best part of a week to catch on – the “attack” occurred on July 6 – but when it did, the Instagram snap by Christine O’Connell went viral.

In the flood of reporting it was suggested the lad was about to be carried aloft by the wedge-tailed eagle, suggesting a similarity with the Azaria saga.

On the principle that in show business, it doesn’t matter what they say so long as they spell the name right, the event is probably in the category of global advertising you couldn’t buy.

As for Mr Schwer, he says “it’s a shame that some media outlets have chosen to sensationalise what essentially seems to be a naturally inquisitive bird getting a closer look at something that caught its attention and inadvertently gave a boy minor injuries in the process.

“Customers are discerning. They know whilst this is captivating footage and imagery, that this kind of thing happens extremely rarely and doesn’t reflect common occurrence at these types of shows.”

Here in the bush we take these things in our stride, of course, and Mr Schwer went back to gardening.