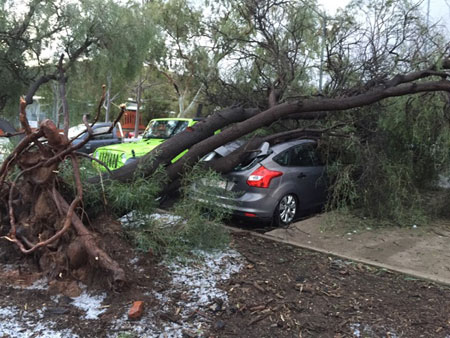 Two schools are closed and Emergency Services (NTES) are taking stock of the damage done by the wild hailstorm on Friday.

NTES personnel responded to 86 reports and while there were no injuries, the damage was extensive. They passed on six more reports to other agencies, including the town council.

NTES regional manager Clare Barker says fallen trees were a big problem, as well as water leaking through roofs because drains were blocked – by hail but mostly because of failure to keep them clear.

“The hailstones acted like a weight on the roofs and a collection point for water which could not escape because of blocked drains.

“We urge people to make sure they are regularly cleaned,” says Ms Barker.

The main task for the 27 volunteers, 18 NTES staff and nine helpers from Bushfire NT was putting tarpaulins on roofs. 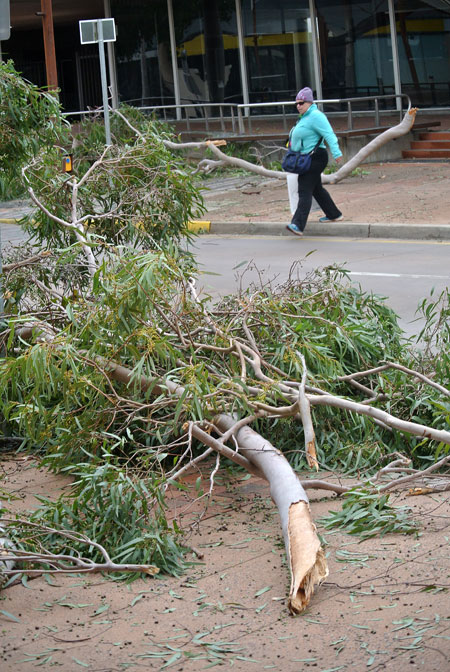 “The community helped each other out as well,” she says. “Locals deserve a big big pat on the back.”

The Senior Secondary School in Sadadeen will be closed for several days because of water damage to carpets, and the Acacia Hill School will not be open today nor tomorrow “at this stage,” says Chief Minister Adam Giles.

Staff are “working to have its high support special needs students returning on Wednesday”.

Minister for Education Peter Chandler says arrangements are being made for Centralian Senior College students to temporarily relocate to Centralian Middle School.

In order to minimise any disruption to their learning programs Centralian Senior College students in Year 12 will relocate to Centralian Middle School from today to Friday, 24 June.

There will be supervised study at Centralian Middle School today and tomorrow but no formal learning program for Centralian Senior College students in Years 10 and 11.

However, on Wednesday, 22 June all Centralian Senior College students are to attend Centralian Middle School where classes will resume as normal, says Mr Chandler.

PHOTOS by DAVE BATTY: Crushed car • Fallen branches, big enough to kill someone, in Todd Mall where several business, including the cinema, are closed because of water damage • An eerie fog settled on Todd River • The snapped trunk of a big, healthy gumtree indicates the ferocity of the storm.

TIO CEO Daryl Madden says the insurance company has had around 200 property and motor claims so far.

“We estimate the damage to be in the order of $3.5 to $4 million, although we will have a better understanding once all claims have been fully processed.”

Mr Madden said the type of damage reported includes roof gutters overflowing due to ice build-up and resulting in “water ingress through the roof”,  trees which have fallen on roofs of houses and vehicles, and vehicles have suffering water inundation which has caused damage to electrics.

He says TIO has responded by:–

• Having local builders on stand-by since 4.45pm last Friday to attend any urgent make safes as required. Additional builders can be called in from Darwin if the local builders are unable to manage the demand. 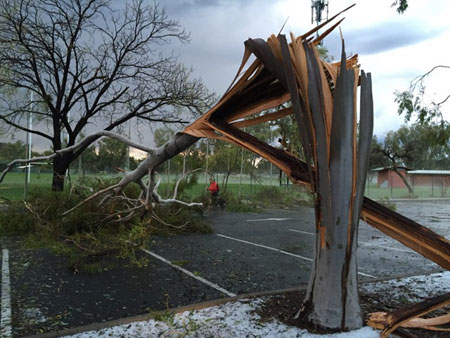 • Having our claims staff on call over the weekend to register claims overt the phone.

• Having a property assessor on the ground in Alice Springs since Sunday morning assessing properties, and we will have more over the next few days.

• Having additional staff allocated to the Alice Springs office to assess motor damage.