20th Beanie Fest about so much more than headwear 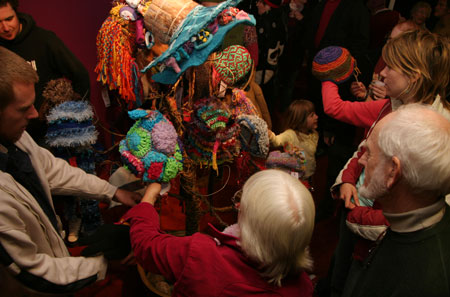 Wintry weather has arrived just in time for the annual Alice Springs Beanie Festival, which this year celebrates its 20th anniversary.

Left: from our archive, Beanie Central in 2007 – the festival has proved to have enduring appeal.

‘Spirit of the Land’, a popular competition category, has been adopted as this year’s theme. It looks for beanies that celebrate the Australian landscape, whether it’s the ranges, the bush, the sea or the desert. This year it is also the theme of a commemorative book, launched on opening night this Friday at Araluen, on what must be one of the arts centre’s biggest events of the year.

In the lead up, the Beanie Festival has held a record number of workshops in Aboriginal communities including Ernabella, Haasts Bluff, Titjikala, Santa Teresa, Karnte Camp, Yuendumu, Fregon and at Larapinta Primary School.

“The enthusiasm and the quality of the work from our local communities add an amazing dimension to the festival each year,” says Jo Nixon, Festival Director and Chief Beanieologist.

“The artists are excited about sharing their culture with the visitors and residents of Alice Springs. Make sure you see them demonstrate the Pitjantjatjara spindle. This is probably the most ancient spinning technique still used in the world.”

Some of these Indigenous artists will be teaching needle felting at the festival in drop-in workshops. 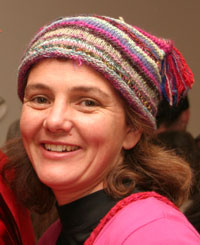 “The textiles produced by the Aboriginal felt makers sometimes reference ancient symbols and stories, yet the work has a gorgeous clean and contemporary feel,” says Nixon (at right, in ’07).

“These projects generate much needed income for people in remote communities. All our work supports the Indigenous projects. In fact, most of the non-Indigenous artists who volunteer come to support a bit of warm and woolly reconciliation, as well as the fun of the beanies.”

An unprecedented number of beanies are expected for this year’s exhibition, submitted from artists worldwide, with many crossing the boundaries from warm headgear into wearable art.

The festivities begin on Friday midday with the opening of Beanie Central, where over 6000 beanies will be on sale, followed by the Big Beanie Party at 6pm in the Araluen Arts Centre grounds, where Drum Antweme and the YAPA style fashion parade will be a highlight, together with food, other live entertainment and the announcement of the National Beanie Competition winners.