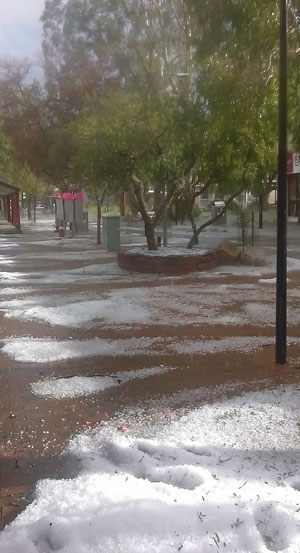 The bigger stones are usually a feature of hail in springtime, not in June, he says. The hail in Ilparpa on June 13 last year had smaller stones – pea to marble sized hail.

The little balls of ice – which don’t show up in the rain gauges – came in company with unusually heavy rain, including 37.6mm between 4pm and 5pm measured at the Plaza in the CBD.

The combination of a low level trough aligning with the MacDonnell Ranges and an amplifying upper lever trough created the conditions for severe thunderstorms to form.
“Additionally, the southerly flow against the ranges created extra uplift and large instability in the atmosphere and fuelled the growth of hail-producing supercells,” says Mr King.

Falls till 9am this morning were: 62mm in the CBD, 52mm at the Big Dipper and 45mm at Wiggly’s, both north of the town in the Todd catchment area.

The airport got just 17mm.

There were no injuries in the storm yesterday but some 30 reports of power lines down, trees uprooted and minor flood damage, according to the police. 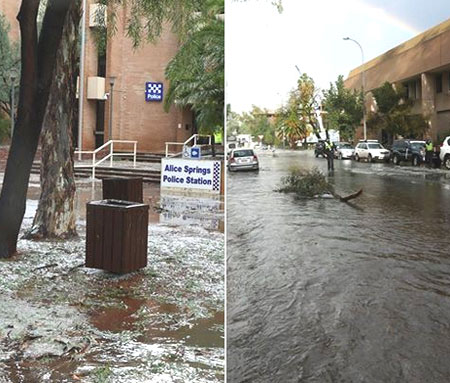 The Todd River is flowing but there was no flooding, and none is expected, although the causeways are still closed except the Taffy Pick – Casino one, and there are no other traffic diversions in place.

The Stott Terrace and Ross Highway bridges are of course open.

As for the weather system, it’s gone off to the east, and we may get a few sunny patches this afternoon, and a bit of fog in the morning.