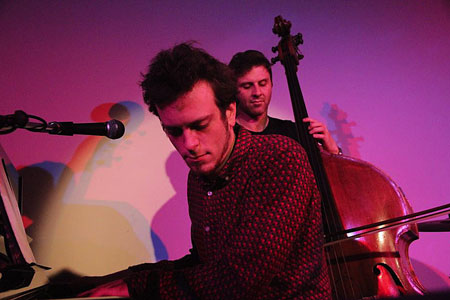 
He cut his musical teeth as a kid busking on the streets of Alice and competing in the Centralian Eisteddfod; now Darcy Davis (at right, with Tom Tom) has been accepted into a top international school for the study of contemporary music, Berklee College of Music in Boston, USA.

The college has its roots in jazz but now offers a broad-based musical education, embracing many contemporary genres. It boasts a star-studded alumni, including 107 winners of 266 Grammy Awards, and it’s not easy to get in: the acceptance rate, after a live audition and interview, is only 32 per cent.

For his audition Darcy played ‘Some Day My Prince Will Come’, memorising the version of his namesake, Miles, practising every day for a month to get it down. There were also tasks in sight-reading, rhythm, singing (call and response), and improvisation.

“I had to play the Blues for an all-black panel and I let rip!”

Now he’s going to “the honeypot” for a year of intensive up-skilling and networking.

But the thrill of it all comes with a price tag: $US50,000 for tuition and board for one year, which he needs to raise before heading off in August.

On top of a regular job at the Herb Shop in town he’s accepting anything that comes his way, from casual labour to the more rewarding gigs that use his musical talent, including teaching, and recording for other artists in the Red House rammed-earth studio set up by his musical dad, Bill Davis, in the backyard of the family home.

That backyard was also the venue for a recent fund-raising concert (below), featuring Darcy, of course, supported by Frankie and Tessa Snowdon on backing vocals, and with a set by Bill. By the next day Darcy’s bank balance was $6000 healthier.

Apart from bringing in the necessary cash, Darcy sees the hard work as preparing him for the intensity of the year at Berklee, at the end of which he hopes to pick up a scholarship allowing him to do another year. 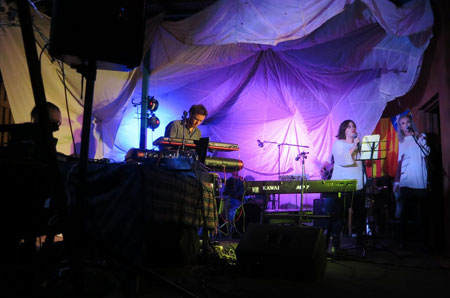 “I want to master my craft as a pianist but it’s hard to make a living as a musician. You have to be multi-faceted.”

To this end he wants to major in Music Production and Engineering.

Who knows where the experience will eventually take him. When he leaves in August it will be on a one-way ticket. But in the back of his mind will always be the goal of taking the Red House Recording Studio to an international standard.

“I want to realise Dad’s dream for that place. Here is home, I’m tethered here. If you have roots somewhere you are really lucky. I will always come back and want to feed into the community. I know how much talent there is here, how much flair and originality. I’d like to produce it with the polish of the big cities. You need both.”

In the meantime, keep your ear out for other fund-raising gigs, including two in mid-August with well-known Melbourne jazz pianist Steve Sedergreen, under whom Darcy studied for two years at Melbourne Polytechnic (formerly NMIT).

And jazz is not the only string to Darcy’s bow: he’s planning a night of hip-hop and electronic music at Watch This Space on July 9.

By GEOFF MIERS Want to get the kids involved in the garden then suggest they help grow some strawberry plants. Strawberries are great fun, they are...
Read more
Issue 5

By ERWIN CHLANDA A Domestic Violence Order was given to Shane Lindner, the chairman of Lhere Artepe, the Alice Springs native title organisation, designed to...
Read more
Issue 1