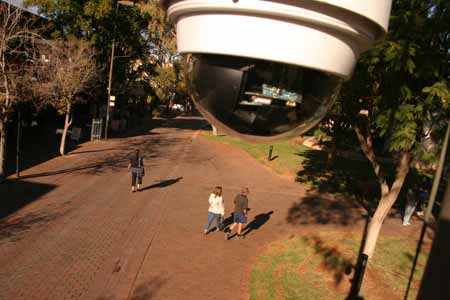 UPDATE, 18 May 2016, 12.36pm: Commander Danny Bacon is investigating the incidents reported by Cr Eli Melky and will address council at its Ordinary Meeting on Monday 30 May.
FURTHER UPDATE, 2.04pm: Police have advised that as yet no formal complaint has been received from the victim in this matter.
UPDATE 19 May 2016 4pm: The victim, who asked not to be named, says he has made a formal complaint, and named the police office to whom he made it. We are seeking comment from the police.

A man was attacked last Wednesday night in front of a well-lit restaurant in Todd Mall by several youths yet there was no CCTV footage of the incident, according to Councillor Eli Melky.

He raised the issue at last night’s Town Council meeting, asking CEO Rex Mooney and Mayor Damien Ryan to raise it as a matter of urgency with senior police this morning. Mr Mooney agreed to do that.

Cr Melky was at the scene of the attack and with others went to the man’s assistance. However, the man had already sustained at least one blow to the head from a bottle and suffered concussion.

The incident began at about 9pm when the youths tipped over the man’s motorbike, parked in front of the restaurant. When the man tried to intervene, they attacked him. All this was in full view of restaurant patrons: the youths didn’t seem to care, said Cr Melky.

He referred to other “brazen” incidents in town, day and night – a lot of shop-lifting and a spate of vandalism to cars on Eastside last weekend.

Yesterday afternoon he had seen youths kicking a football to one another across Gregory Terrace, between the Coles and Kmart carparks: “It’s run amok time.”

He also asked whether the Youth Patrol service, run by council and Congress, is part of the problem, drawing youths in number to its pick-up point on Todd Street.

Mr Mooney reiterated council’s request – put formally to both the NT Government and the Opposition – for an after-hours youth drop-in centre, despite the reservations about such a service from the Department of Children and Families.