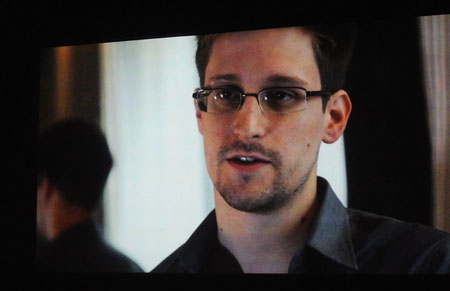 The inaugural Something Somewhere film festival was an outstanding success. Most films sold out. It will hopefully become a red letter weekend in the town’s calendar, as pledged by Alex Kelly, the charming, resourceful and efficient head of the organising team.

Bob Durnan is writing his take on this marvellous event which we will be pleased to publish.

Below is a “but” which in no way is meant to detract from the above.

The town’s interest in the heroic response by 33-year-old Edward Snowden (above, right) to history’s most prolific mutilation of personal privacy, by the United States of America, on a global scale and with Australian complicity, was substantial: Araluen’s 500 seat theatre must have been four fifths full for the movie Citizenfour.

The movie dwells a little too long on images of email texts and digital codes, which could have been dealt with by saying film maker Laura Poitras and Snowden had to find a secure way of communicating. 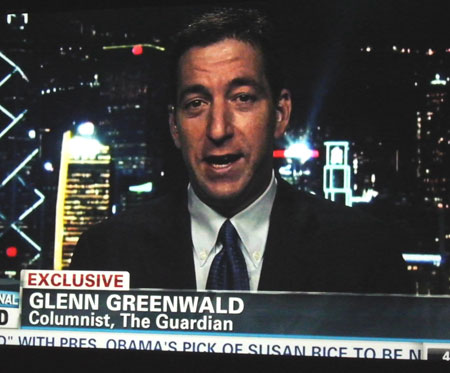 But the sequences in the Hong Kong hotel room, of Snowden talking with Guardian journalists Glenn Greenwald (at left) and Ewen MacAskill, is documentary film making at its peak, not just getting wind of a world scoop after the fact, but shooting it as it unfolds.

The stage was set – three chairs, three microphones – for a community discussion about Pine Gap, which vies with Menwith Hill in North Yorkshire for the title of being the USA’s biggest offshore spy base. It is a conduit to the CIA and NSA of every email, mobile phone call, google search, credit card purchase, web browse, airline booking and God knows what else you are making.

Panel member Russel Goldflam presented a thumbnail of “The Base” that could have been the introduction to the kind of lively debate Alice Springs had staged repeatedly in the past.

But there was no roving microphone, half the people went outside for a chat, and when the second panel member, Jonathan Pilbrow, had used his time pitching a protest in October it was all over.

For example, why didn’t anyone tell Member of Lingiari Warren Snowdon, who was in the audience, what he should be doing about Pine Gap, if he gets back in on July 2? Or what he did do when his side of politics was running the country?

We live in the mirror image of a Big Brother system and are more and more complicit with it.

Territorians live under a regime that sells public property without consultation to a foreign power many consider as hostile or at least on the nose; it pork barrels to its heart’s content; it conducts public discourse through missives flicked around by minders; and lavishes taxpayers’ money upon mates expected to return favours.

A good example of a country run by fear is when whistle blowers or people with concerns unrelated to their work will speak publicly only on the condition of not being named, lest they or their families are victimised: It happens right here, once or twice a week, as we in the Alice Springs News Online know only too well.

It’s a conversation we could have had last night as two elections are drawing near.

Are there are too many Snowdons and not enough Snowdens?