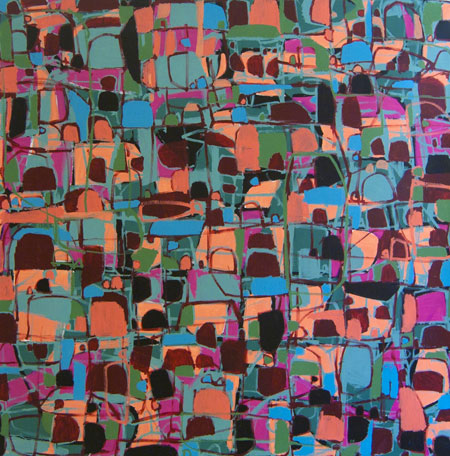 Naomi Hobson from Cape York in far north Queensland – “one of a new generation of contemporary Indigenous artists” – has been awarded the 2016 Alice Prize.

Judge of the prize, director of the Queensland Art Gallery, Chris Saines, described her art as “inherently engaged with the local and at the same time one which feels entirely global”.

The winning work, High Pine, 2015, (right) “celebrates a sense of place,” he said, “through an all-over form of pictorial organization and an unerring painterly-ness that almost collapses Indigenous and non-Indigenous perspectives, making this work as evocative of country as it is of the linearity and pictorial rhythms of an Ian Fairweather”.

Hobson held her debut solo show at Alcaston Gallery in Melbourne, opened by Noel Pearson and then Minister for the Arts, Tony Burke. It sold out. Since then there have been more solos, participation in group shows, and she was a finalist in the past two Telstra National Aboriginal & Torres Strait Islander Art Awards.

She comes from Coen, one of the communities where the Cape York Partnership founded by Pearson has driven an agenda of social, economic and political change. On the occasion of her debut show Hobson credited Pearson’s work for the opportunities that people like her had had to “orbit in and out” of the Aboriginal and non-Aboriginal worlds. For her, that had meant, in particular, studying for a visual arts degree “that helped me to express myself”. * 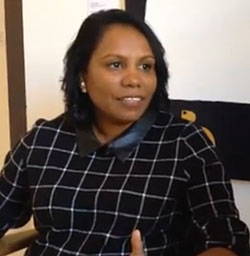 This she does with great skill, as noted by Saines. In High Pine she “captures the densely rain-forested tree forms, grasses, wetlands and colours of her Cape York home,” he said.

“It’s what gives her painting its entangled teeming visual life as if caught between ground-based and vertical views. She evidently takes unbridled pleasure in moving the paint widely and rapidly across the canvas, dragging, looping, then faceting flames of colour to create a constantly shifting depth of field, a depth that can frequently deny the ground plane of so much contemporary Indigenous painting.

“It is a powerful and visually insistent work about the unique country it represents. It is her country and it no less speaks back to the broader history of art and indeed of painting itself.

“I gave the prize to Naomi Hobson because she has created a highly resolved work that is entirely successful and persuasive in its own terms and I kept returning to it again and again.” 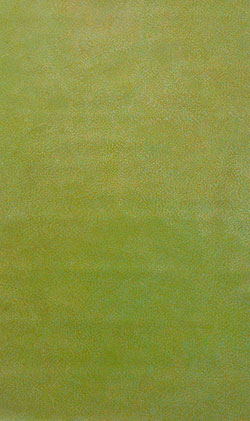 Saines also named three highly commended works and commended a further three from the total of 67 on show. Only one of these is a painting, Yam Seeds and Flowers, 2015, (right) and it is also by an Indigenous artist, this time from the NT’s Utopia region, Elizabeth Kunoth Kngwarray.

Saines described it as “an exquisite account of her bush yam story caught in an infinite number of tiny marks that seem almost magnetically organised across the painting’s visual field”, creating “a subtle sense of shift through and across the surface of her painting, irresistibly evocative of the effect of the wind at ground level”.

The five other works which particularly caught his attention were in a diverse range of media, a hallmark of this year’s show.

In the highly commended category were two photographs, as different from one another as chalk and cheese, one turning an unblinking eye onto a highly controversial feature of the contemporary Central Australian environment, the other far more ethereal and seemingly timeless.

In Pine Gap (a photograph in the Centre of Australia), 2015 (below), Kristian Laemmle-Ruff from Victoria, demonstrates his “visually acute and potent sense of image-making”, said Saines, illuminating “in every sense of the word that which largely goes unseen and unregarded”.

Laemmle-Ruff presents his crisp digital image of the American spy base south of Alice Springs as a light-box. The base is caught here in the play of the box’s back-lighting, the ‘dying’ light of the setting sun and the harsh electric light that holds back the night.

The image has been previously shown in an exhibition Laemmle-Ruff developed, called Mind the Gap, that “encourages us to question and hold ourselves accountable for our actions as global citizens”.

There’s no readily accessible statement of intent for Dasha Riley’s Thoughts of Spring, 2015. The artist’s website reveals that this image has already drawn accolades elsewhere and that this child model is a favourite. It also suggests that the artist’s career is quite young but vibrant. Now a Queenslander, she was born in 1969 in Germany but her CV shows her active (intensely) over just the past two years, with several awards and prizes as well as participation in group shows. 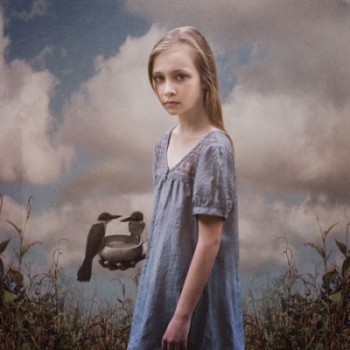 Saines described Thoughts of Spring (left) as “evocative and resonant”, “part studio photography portrait, par art historical play”, “both self-referential and knowing, an enigma wrapped up in a visual puzzle”.

He was reminded of the work of Loretta Lux (also born in 1969 in Germany), who “similarly creates enigmatic portraits of young people lost in seeming reveries or engaging with objects or motifs with no particularly apparent intention”. The Victorian photographer Julia Margaret Cameron could also “inhabit the same ambivalent conceptual space”.

Saines found himself haunted by the image: “Was it as vacant as the child’s gaze or was it imbued with a meaning so arcane that only deep research would reveal it? I stopped caring and lost myself to it.”

In his commended category were a set of eight vessels (looking deceptively ceramic but actually of mild steel), a set of carved cricket bats, and a video work.

The mild steel vessels are by Lindy McSwan from Victoria, titled Horizon Lines, 2014 (below). With them she creates “a horizon line of possibilities, as if the sun is alternately setting or rising both at the horizon’s edge and illuminating the ground beneath it”, said Saines. Her organization of them in an “ascending or descending horizon line” brought to mind “the tradition of ceramic still life” as practised so eloquently by the late Australian artist Gwyn Hanssen Piggott.

Saines described the carved cricket bats, titled Domestic Series, 2016, by Patrick Heath from South Australia, as “one of the most instantly disarming and impossibly humorous works in the exhibition”. The bats, which have “clearly seen some big innings between them”, become “a group of totemic figures whose exaggerated male appendages – what else? – speak to more than batting prowess”. He saw in them a “nod to traditional Melanesian, Polynesian and Maori carving”, and an “interesting if unintended parallel to work of New Zealand artist Francis Upritchard who took to hockey sticks in a not dissimilar way”.

The commended video work, Badlander, 2014, (still image above) by Sarah Dugan from NSW, plays on “the filmic tropes of the so-called gothic sensibility in film, art and literature”, said Saines, showing the “uneasy underbelly that belies the ordinary”. The artist’s “wide landscapes, dramatically lit closed interiors inhabited by individuals seemingly going quietly about their business beg comparison with the filmic canon of artists like David Lynch and Quentin Tarantino” (he might have also mentioned Terrence Malick’s brilliant debut film, Badlands, 1973 to which Dugan’s title surely refers). The work would reward several viewings, he said, and at seven minutes, is “mercifully short enough” to sustain them, with each dramatic element shifting to and informing the next.

The Alice Prize is showing at Araluen until June 13, plenty of time to consider and vote for you own choice of best work, with the Tammy Kingsley People’s Choice Award announced on that last day.

By JOHN P McD SMITH As COVID-19 is likely to put a spanner into overseas travel for a while, holiday makers may get inspiration for...
Read more
Issue 4

Helping kids in the street with all the negative stuff

By JULIUS DENNIS “There’s a spirit here that I still can’t put my hand on to figure out what it is,” says Jason Lord of...
Read more