Phil, in a Braitling field getting crowded, never gives up 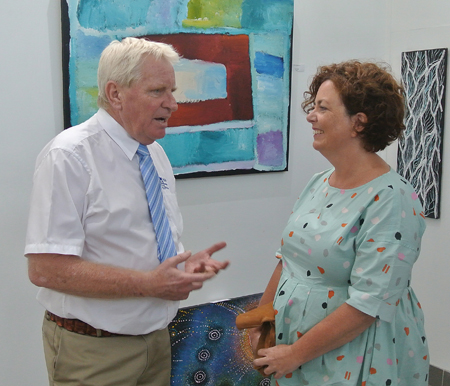 If you could become Chief Minister through sustained effort to get into Parliament then Phil Walcott would be the man.

He started campaigning as an Independent in 2009 and spent $30,000 of his own money trying to win Greatorex – now abolished – in the 2012 election.

Matt Conlan won the seat by a country mile, getting 1991 primary votes, but Mr Walcott, with 512 votes, wasn’t far behind Labor’s Rowan Foley, 673 votes. Mr Walcott was well ahead of the Greens’ Evelyn Roullet who received 338.

He didn’t do any preference deals in 2012 but this time ’round, standing against Chief Minister Adam Giles in Braitling, he says he will, once the positions on the ballot papers are known.

At Mr Walcott’s policy launch last night he was having a cordial heart-to-heart with Labor candidate Dale Wakefield (pictured with Mr Walcott). Also present was Dalton Dupuy, who is throwing his hat in the ring for the Greens, says Mr Walcott. Not present last night because she was out of town, but also invited, was the other Braitling Independent, Jane Clarke.

Given his enthusiasm for the job Mr Walcott deserved to have more people at his launch, held at the Yubu Napa art gallery and catered for by Dianne Logan – a considerable effort by Mr Walcott which indicates his commitment to candidacy.

The circle of close friends – and friendly opponents – who were there were a good indicator of his network built up over 22 years, first as a B&B operator and later as a psychologist.

He had made his policies clear early in February but re-iterated the disenchantment – as he says he’s detecting during his door-knocking – with the current “Fly In Fly Out Chief Minister” and his “arrogance and manipulation”.

The should be less negative language in public life, saying “remember” instead of “don’t forget”.

He’s disappointed that the spend of $75m for the new power gas fuelled power station will preclude significant investment in solar.

Mr Walcott thinks long term Independent Gerry Woods is a good local member: For a non-drinker and a non-smoker, he spends a lot of time in the pub, because his constituents are there, and he’s a good listener.