Tasty take on work for the dole 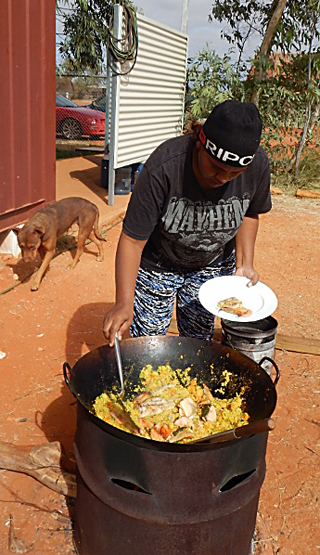 Fantastic programs are happening all over the Northern Territory under the Remote Job and Communities Program, with countless community dwellers benefiting. I will focus on the programs hosted by CatholicCare NT in the southern Alice Springs region as I know them best.

The restoration of the old police station in Aputula is nearing completion.

I work in Aputula (Finke) as a mentor for the Terrific Tucker Program and Employment Consultant for CatholicCare NT. The organisation is committed to having place-based services where possible, so staff live on community, rather than be fly-in-fly-out workers. What a journey it has been so far!

I have stated from the beginning this is not about me teaching, this is a two way street, an opportunity for an epic exchange of knowledge and culture.

We began preparing the people on community in January, so that by July they would be comfortable with the new program. I signed a three year contract; I would not have signed one for less time. Time is one of the most important ingredients to implement positive change. Love is another one, together with curiosity, trust and hope; not necessarily in that order.

When I started I was pleasantly overwhelmed by the potential but understood the women’s reservations to start another program. All I could do was to start cooking a healthy meal.

Never will I forget that first day. I had decided to make a Japanese omelette with sea weed, a garden salad with home-made mayonnaise, and a damper.

I started with the mayonnaise because it is a mysterious and interesting process. I succeeded in getting the women to sit around a table together and watch how the mix of egg and mustard, vinegar and oil became thicker and thicker the more oil I poured. Some participants stood up to be able to look over the rim of the bowl I was using.

This was a good sign. Curiosity is an underestimated drive. I asked them to cut the vegetables for the salad. They didn’t want to. This did not bother me in the least. Why would they?

I moved on to the Japanese omlette, which is poured in layers and then rolled around a layer of thin sea weed, back and forth, back and forth in the square pan. I was juggling the jug of beaten egg in one hand, a stack of sea weed in the other, swirling the pot around with two fingers. 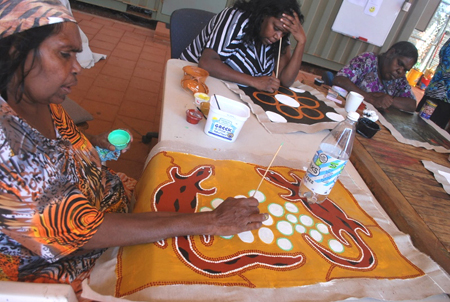 Then something magic happened. One of the ladies took the jug from my hand and started pouring the egg layers. We worked together in silence because it is a job one has to concentrate on. Behind us, women began cutting up the vegetables.

A damper was made Aboriginal style by yet other ladies. Later we had the meal together. Not much talking was done, but I knew everything would be okay. The women had given me this non-verbal signal that I did not need to worry. Now and then someone would sigh and comment on the food: “Lovely.”

We have been going from strength to strength ever since. The group varies from eight to 18 participants, every week day, from 8am to 1pm.

I cook healthy European (mainly olive oil based, Mediterranean) food with them; they have taken me out on food gathering trips into the desert. Here they are in charge, here they have the confidence that I lack, here they stride proudly, bare foot, with just a thin piece of clothing on, while I need to be covered in boots, hat, long sleeves.

Their digging is twelve times as fast as mine. Now and then they come over to see how I am progressing and teach me words in language. We laugh a lot.

We have started cooking outside on bush woks (after a course with Roy Price of BushWok in Alice Springs).

We teach each other crafts like wood work, jewellery making, and basket weaving. We try to remember how to knit, how to crochet. We document what we are doing and have made several books.

We have a radio program on CAAMA RIBS called Terrific Tucker. This two hour program is now broadcasted on CAAMA 2, NT wide.

We have twelve hours of broadcasting under our belt so far. The content covers a wide variety of local and global topics, some in language, and some in English.

In August last year we employed a local lady to help me. She’d never had a job before. She’s a natural leader, fair and funny, and a hard worker.

We have begun a fashion project with some of the women as models in cooperation with St. Vincent de Paul in Alice and have produced a calendar with photos. 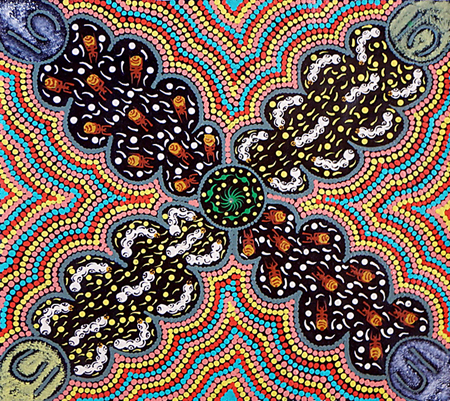 We’re 15 months into the program. The ladies arrive very early for their activity now, and are late to leave.

Our workplace is a happy place, buzzing with activity, laughter, and conversation. The participants own Terrific Tucker under the gentle leadership of my offsider, so that I can concentrate on the coordination of, and planning for yet more projects to share.

In the meantime the men’s group has been working on the old police station. Proposals are on the way for the use of this nice old building. We would like to use the building for a library, an art gallery, a clothes shop, and a coffee shop like the one in Ltyentye Apurte.

When the men (who are often invited to share a meal with us) have finished the old police station they will be assisting MacDonnell Regional Council with community development.

I’m happy living in Aputula and am grateful to have been so warmly welcomed into the community. The women teach me their language (Yankunytatjara) and their gentle ways of negotiation and problem solving.

My off-sider bought herself a washing machine immediately with her first wages.

We’re growing our own herbs and lettuce for the kitchen, some of it hydroponically.

The ladies have started selling their paintings, they set their own prices.

Once we’ve set up all projects we can rotate the ladies so that our work will be varied and interesting. Projects like a gallery, a clothes shop, and a cafe can generate their own money. If this happens we can create local jobs. Ltyentye Apurte’s coffee shop is already catering for parties and meetings. The men’s shed there is selling furniture and bush stoves. 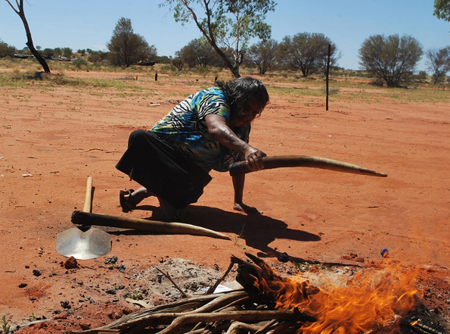 I stand back in awe now and then and say thank you, women of Aputula, for this incredible adventure, this epic exchange of skills, ideas, and friendship. I could have not asked for more. It is beyond my wildest expectations.  We still have at least until June 2018 to develop our dreams. I’m sure we will accomplish them. Aputula Kungkas, you are wonderful!

PHOTOS: Painting above by Pauline Allan • At left: Kangaroo tail is also on the menu.

[The new Remote Job and Communities Program laws launched into full swing on the first of July last year. People who live in remote communities and are on a Centrelink benefit payment, and who are full time activity tested, are obliged to work 50 hours a fortnight in activities that benefit their communities.]