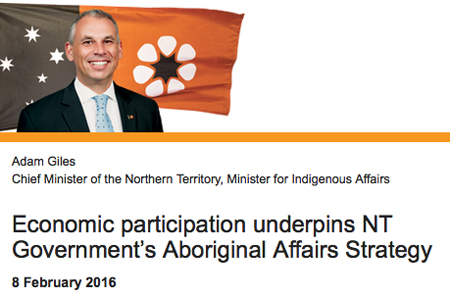 Sixteen builders and contractors, including the three biggest in town, this morning vented their anger over NT Government initiatives to increase Aboriginal employment.

They were incensed about an announcement by Chief Minister Adam Giles that as of next year, 70% of government contracts in the bush must be done by Aboriginal companies.

This morning they were told by an advisor to Mr Giles on a phone link, that it was all a mistake.

And they left no doubt about their opposition to the “Indigenous Employment Provisional Sum” scheme.

Mr Giles said in a media release on February 8: “We’ve introduced a new remote contracting policy that requires 70 per cent of all contracts for civil and construction projects under $5 million in remote Aboriginal communities go to local Aboriginal businesses by 2017.”

Explained the advisor: “No, the actual wording was, contracting in remote communities must go to local businesses in that community or in the region.”

“We are local as you get,” said the meeting chairman, Steve Brown, an electrical contractor who is also the CLP candidate for Araluen: “The way it is worded it sounds like we are going to lose our businesses short of some sham way of turning them into Aboriginal businesses.”

“I understand the wording was wrong in the media release,” said the advisor and referred the meeting to notes sent to them for purpose of today’s meeting, saying “70% of all Northern Territory Government tenders in remote communities must be delivered by local businesses by 2017.”

The notes say local has the “cascading” meaning of “a) in the community, b) in the region and c) in the Territory”.

This prompted prompted one attendee at the meeting to observe that it doesn’t matter whether a tendering company is Aboriginal or even has Aboriginal staff.

The advisor agreed there had been “some confusion around this” to which the chairman replied: “I would say this would be an understatement.”

Said another attendee: “There was either a mistake in the media release or the Chief Minister is back-pedalling.”

“It wasn’t a mistake on behalf of the Chief Minister. That’s a negative,” replied the advisor.

The fact is that no retraction nor clarification has been issued by the Chief Minister since the media release on his behalf 12 days ago.

The advisor conceded there are Aboriginal communities which do not have businesses and that is much more the case in the southern part of the NT.

An audit had revealed that in the first six months of 2014, there had been $425m worth of contracts in remote communities, and 35% of them were delivered by Aboriginal businesses, claimed the advisor.

“A lot of them” were delivered by interstate businesses “and we want more local businesses delivering these projects,” he said.

He mentioned the Alice Springs firm Probuild entering into a joint venture with an Aboriginal firm for a contract in the Top End as an example of what the NT Government had in mind, and which would create “a better opportunity of winning that contract”.

“I take it in the Probuild case this was used to exclude other contractors, is that correct?” asked Mr Brown.

“There was no exclusion whatsoever. They were the only business which could demonstrate that local content,” came the reply, which did little to end the aforesaid confusion.

If there is only one “local” business available to partner with, and that is already tied up with another bidder, would that not disadvantage other tenderers, asked one attendee.

“That’s all about building local relationships,” came the reply.

The advisor said all the advantage Probuild got was the 25% weighting for local content.

“So they had that 25% advantage over other locals,” asked Mr Brown.

“None of them are government funded,” replied the advisor. “[But] they are often not for profit.”

“So they are a charity,” said one attendee.

They might get some public money but they are “not funded in an operational way”.

This prompted one attendee to quote the case of an Aboriginal company in Alice Springs which, he said, although having split into a charity and a Pty Ltd firm, is operating out of premises that were gifted to them: “They’ve got a leg up there with their commercial land, yet they are getting select tenders in Alice Springs.”

The advisor: “They don’t get it handed on a plate. It is value for money for the taxpayer.”

Will the new local content committee determine who gets a contract, the group wanted to know: “You can get a shelf company, put on an Indigenous person as a director for $500 a week, and you have a local indigenous company?”

The advisor countered, along the lines, “we know what companies are doing”.

Not so, says another attendee, and quoted a major company that is linked to a supposed Indigenous firm, that operates out of the same building, and is getting work on the basis of being Indigenous.

The advisor: “It happens all over Australia” that people are maximising opportunities.

Attendee: “So we’re just being encouraged to play the system.”

The tradies and builders at today’s meeting may have had a win on the local vs Indigenous front. They seem confident the new local tender committee will make a difference.

But on the “10% provisional sum” issue they are clearly still pissing into the wind.

This is how Mr Giles described the Indigenous Employment Provisional Sum scheme on February 8: “We’ve set a number of ambitious employment targets and policies including doubling public sector Indigenous employment from 1800 to 3600 employees by 2020, and initiating Aboriginal employment requirements for all Government infrastructure contracts above $500,000.”

“You have altered the market economy,” said one attendee to the advisor, “and companies are simply doing what they can to survive”.

The advisor didn’t get any thanks for suggesting the people at the meeting didn’t understand the policy: “We want more Aboriginal people in the private sector,” he said. “The policy is working and has been very successful to date.”

“You’ve got three people on the job. You’ve got to make sure one is Aboriginal. Simple.”

Not so, say the builders. These are some of the points they made at today’s meeting:–

• The people “on the nail bag who are doing the work” don’t have the time to implement the scheme because they don’t get paid for that time.

• Contractors have to get rid of trained staff to employ Aborigines.

• To compensate for the losses inherent in the scheme head contractors are sourcing materials from interstate instead of from local suppliers.

• To the advisor: “You are wrecking the market. You are out of touch.”

• The Aboriginal percentage of the labor force capable of being employed is nowhere near 30%. “It’s more like 5%,” said one attendee.

• The claimed numbers of Indigenous people employed in the construction industry as a result of the scheme, when compared to earlier employment levels, are without foundation.

• The government isn’t responding to concerns that naming people as Aboriginal employees may be against the law. The advisor said names are not part of the departmental records.

• A reputable, skilled subcontractor “identifying as Indigenous” is being approached by “about 90% of the firms in town to carry out work on their projects. These guys are charging up to 100 bucks an hour because they are in such high demand” under the 10% provisional sum scheme. It is not “actually engaging out-of-work Aboriginal people”.

• The scheme provides an incentive for importing Aboriginal workers from interstate: “Our kids are out of work. Our future is half hanging in the balance. With shit like this going on, it’s not going to build confidence in our town.”

• The scheme should be taken out of the tender process, run independently from it, and the builders and subbies who take it on should be remunerated for the administration of the scheme.

• The people at the meeting “agreed to disagree” with the advisor and have asked for further discussions, with the prospect of meaningful changes being able to be made.