A dozen Aboriginal people are joining Coles supermarket as permanent part-time employees, and six as casuals, after a high-pressure, week-long training course under a scheme that assesses at the individual abilities of each applicant. ERWIN CHLANDA reports. Graduates this morning: Raelene Williams (at left) and Marcus Casey-Kirkman Junior (at right).

"The Provisional Sum program needs to make clear how it will be determined whether someone is or is not an Aboriginal," says CLP boss Ben Kittle (at right). "We want to know whether the government is listening. There needs to be further consultation to review and improve this policy,” says Neilia Ginnane (at left), from the HIA. ERWIN CHLANDA reports. 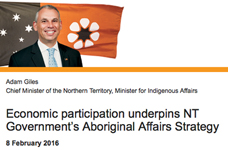 Hunter/gatherers vs the farmers

Whitefellas are not at some pinnacle of evolution that all other cultures seek to attain. When we meet Aboriginal people, it becomes uncomfortably evident exactly what have we given up for what we have gained, writes BLAIR McFARLAND in the final part of his series.

Aborigines find jobs not the only way to harness resources

Somehow more and more Aboriginal people are getting work despite not having a good education. The underlying trend is up. The Indigenous increases in employment exceeded the increases for the Australian population as whole. BLAIR McFARLAND continues his reflections on the policy conundrums in remote communities and suggests some different answers are needed. 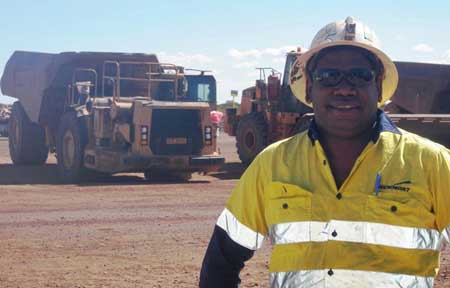 In The Centre, Newmont Gold Mine is looking to double its intake of Aboriginal workers. Will locals, like Jeffrey Matthews from Lajamanu (at left), respond to the opportunity?  He's been at Newmont for nearly three years.  He started doing contract work around the mine as part of a program called the YAPA Crew and moved from there into full-time employment with Newmont.

Skills shortages and the resources boom – they're the mantra when it comes to talking about Australian employment opportunities and all levels of government would like to see Indigenous people responding. In Alice Springs Martin Glass is working on "lining up the ducks".

He's a former Commanding Officer of Norforce, northern Australia's Specialist Reconnaissance and Surveillance Regiment, an Army Reserve unit. That position gave him a lot of experience working with Aboriginal soldiers who are "unbeatable", he says, "when they're well trained and operating in their own country".

The Norforce model is a good one for many Aborigines in remote Australia, says Mr Glass. It's well paid, attractive work for them and while part-time, they can do up to 150 days a year, which makes a real difference financially for them and their families. It might be something that the mining industry could look at, he says, particularly the new mines coming on stream and the various exploration endeavours.

In the meantime, with the backing of his steering committee, he is looking to double within the next 12 months the number of NT locals working at Newmont Gold Mine in the Tanami Desert.  The committee is made up of representatives of the three tiers of government and industry, formed as a result of an MOU signed between the Australian Government and the Minerals Council of Australia. KIERAN FINNANE reports.