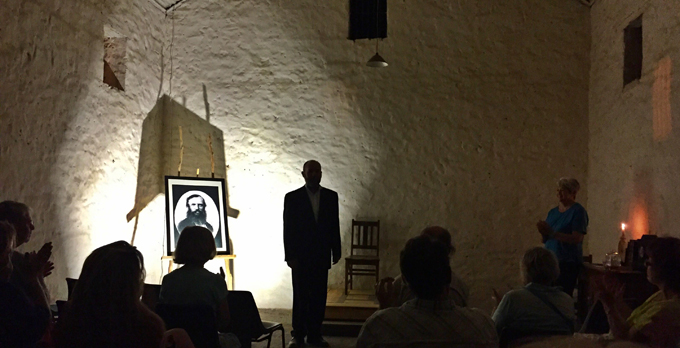 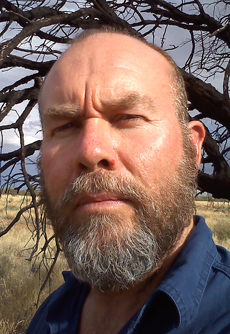 There wasn’t a murmur of disapproval when gun-toting explorer John McDouall Stuart came to life in a play last weekend: in fact he got a standing ovation.

While the freemason’s statue in Stuart Terrace has attracted much  criticism, and the man it portrays has been lambasted by some as a murderer, on stage in the historic Stuart gaol, between the courthouse and police station, he was feted as a hero.

The applause was also for the author of the one-hour play, Journal, and its solo performer, Danny Gillies (above, right).

“The gun was not the main objective. The statue should be holding a compass or a sextant,” says Mr Gillies.

“In the play he is saying: I have a rifle and on occasion, I will use it to defend myself. In no way would I have taken any pleasure from having to use my rifle to kill another man.

“I am an explorer, not a murderer.”

In his day job Mr Gillies is a driver for Centre Bush Bus, transporting countrymen between their remote communities and Alice Springs, the very people those attacking Stuart were claiming to be descendants of his victims.

In fact, says Mr Gillies, many of the countrymen had told him they liked the play and have no hesitation to regard Stuart as a figure in their people’s history.

“The idea for the play came to me about three years ago,” he says.

“I wanted to bring Stuart back from the past, to tell what he had seen and felt as he traveled through unknown Australia 153 years ago.

“I had trouble getting a local actor to play the role, and just as much difficulty finding someone to produce and direct.

“I funded the play myself, and in the end decided to perform the role myself, as well as direct and produce.

“I even made the props myself.”

The only collaborator was Steven “Brownie” Brown who did the lights and music.

The play has six scenes, including Stuart arriving at the MacDonnell ranges, then moving on to Central Mount Sturt, now called Mt Stuart.

Mr Gillies says: “This was followed by a scene titled ‘Aboriginals at the creek’, which covers Stuart’s impressions of the Aboriginal people he met in Adelaide, and how colonization had altered their way of life.

“Then on to the people of Central Australia who where untainted by the white man’s hand, and had often stood before Stuart as Kings of their Land, as I’m saying in the play.

“This was followed by the arrival at land’s end, reaching the sea east of Darwin on July 24, 1862.

“This is where Stuart’s world fell apart for with reaching his goal he lapsed into depression, and severe ill health. He had a return journey of 1900 miles to contend with. This was all done on horseback.

“These were the themes I had to work with, and to try and weave them into a script and performance that would illustrate such hardship, but also such perseverance. That’s at the core of this play.

“I used music and lighting to try and create a mood that would complement the dialogue. I had help from the National Trust with the use of the old Stuart town gaol, which has been fantastic. It’s a great performance space.”

The play was seen by 88 people over two nights. Mr Gillies is planning to expand the play, including Aboriginal actors, and taking it on tour.

“It’s my ambition to perform it in Adelaide – Stuart’s home town and mine,” he says, “and to take it up the whole Stuart Highway.”