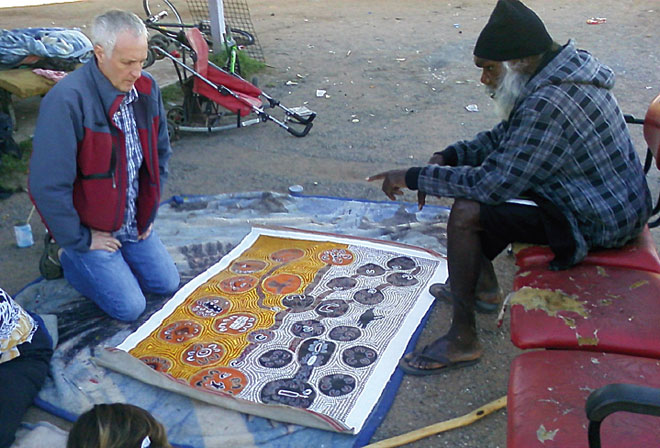 Above: Japaljarri discussing the Eagle and Crow story with Dr Marcus Tabart. See below for the story of this painting about a man’s life.

You can tell the truth of a man by the lines he follows, by the tracks. I have been tracking Japaljarri Spencer for 25 years. He followed a strong line. There are four of those lines to note in this appreciation of him, written just five hours after he passed away in Alice Springs from kidney and heart failure. More lines might emerge as more people speak to his achievements.

Japaljarri was determined to work with the Law: Aboriginal cultural law and Australian law. This was a main line in his work. He plaited these two lines together from 1993, when he became an Aboriginal Community Police Officer. He should have been a superintendent.

In incident after incident he was an instrument of reconciliation between cultural law and police law. He negotiated, advocated, interpreted and translated the meaning of law both ways and he took action fearlessly and intelligently. 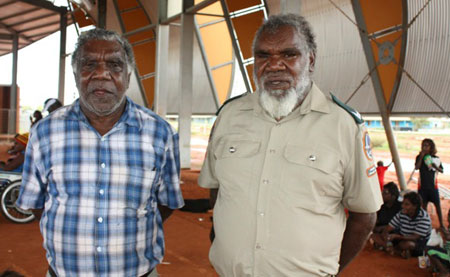 I have seen him disarm a man in a dangerous state of mind in a town camp. The weapon was removed and Japaljarri went back to settle the man’s derangement. I saw him face down an angry (and famous man) in a bush community, a man armed with spears who was intent on mayhem. Over several days the matter was gradually settled and the famous man returned to painting.

Right: Japaljarri in uniform at Yuendumu with Eddie Robertson, NT’s Senior Australian of 2015.

I have driven a vehicle quietly, with Japaljarri talking soothingly in language with a man in the back suffering from depression and terrible fear. And later, in the same vehicle, so as not to draw attention to anything out of the ordinary, he counselled a 12 year old who had suffered unspeakable trauma. Days later Japaljarri explained to me, in Indigenous healer (ngangkari) terms, the deep seated causes and effects of the boy’s distress.

I have witnessed Japaljarri diplomatically negotiating a very complicated matter between police, the family of an offender and the family of a victim in order to settle a matter according to Indigenous law, yet mindful of the obligations and responsibilities of Northern Territory law. I have witnessed him, in uniform, in the company of senior Warlpiri and Pintubi men and Correctional Services officers, working their way through the conceptual problems in the reconciliation between the two laws. Law was Japaljarri Spencer’s line.

A second line is the line of care, Kanyinjaku. It was Japaljarri Spencer and Christine Franks who in the mid-1980s, in Yuendumu, started up a petrol sniffing prevention program that gradually became HALT ( Healthy Aboriginal Life Team). HALT set the way of working inter-culturally (two ways) in authentic partnership.

Two-way partnership between Aboriginal and non-Aboriginal professionals is now the ‘best practice’ methodology . The ‘two ways’ working method was won through blood sweat and tears. Local indigenous substance misuse and youth development projects, such as the Mt Theo Warlpiri Youth Development program follow on in that track.

It was within HALT that Japaljarri began, with his family, to make the thoughtful, powerful paintings and story lines that showed, from an Indigenous way of thinking, the patterns and hard truths of Family Breakdown, Sad Boys are Sniffing, Thinking About Young People and, more recently Eagle and Crow – on the matter of a man taking responsibility for governing his own mind and his violent behaviours.

The 2014 Jungarai Wanu ngangkari /healing story has been influential in primary health care, suicide prevention and mental health. In truth Spencer was a barefoot doctor, a ngangkari who turned his attention to the social ills of our time and place and took pragmatic actions to work a cure.

In this he was a true partner of his vigorous second wife, Marlene Nampijimpa Ross/Spencer who with Sarah Brown and Smithy Zimram succeeded, against all the odds, in getting a Dialysis Unit up and running in remote Kintore. 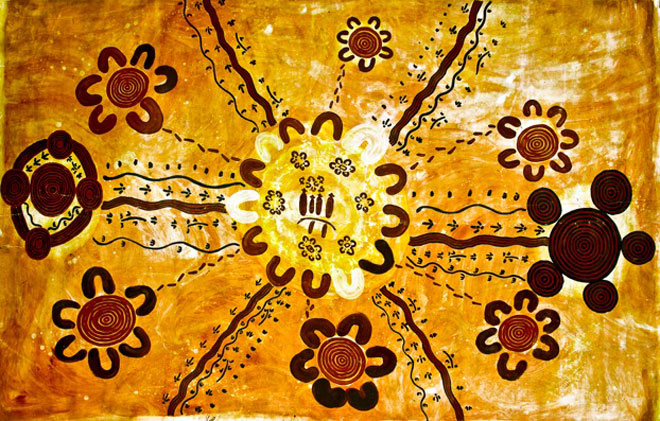 Above: Japaljarri’s Thinking about Young People: In the middle, people are sitting, looking at the present situation. They are sitting in a dust-storm, yellow dust in their eyes. They see people sick, they see women injured, children lonely, men in prison; they see graveyards. They see life and spirit wasting away. Culture has changed to grog culture. Japaljarri says, “Please get this dust out of your eyes. Think.” On the right is a new circle pattern, asking “What holds the future together for Aboriginal people – for you ?”

A third line in his life and work has to be Spencer’s genius. It is true that he learned to read and write English only slowly, but he could think. He could follow and invent lines of thinking in the most original way, weaving ‘black’ and ‘white’ minds together. He sometimes reminded me of a Socrates. He would size up a situation and come out with the most brilliant and convincing question or image that would lead to a way through an impossible human problem. He could think with both sides of his brain. It is the loss of Japaljarri the thinker, the mentor, that will be a great loss to the culture of central Australia.

Just before 3 o’clock, on the morning of 8 December, Japaljarri was alone with Marlene in the hospital, Room 13, Medical ward, West. He knew that his time was coming. His last words were to his wife and partner, who had been beside him resolutely all through the long night. His last words were ‘Marlene, I love you.’

It is true to say that Japaljarri Spencer is a man who loved and was loved by hundreds perhaps thousands of people throughout the country. His line of love was a strong and honest line. He had friends in all places: former Prime Minister Keating had one of Japaljarri’s paintings on bi-cultural governance, Centrefarm drew on his inspiration, psychiatrists came to consult him, police commissioners treated him with the utmost care and respect. Boys in trouble came for help.

In the Gospel of John the man from Nazareth said, “Greater love has no man than this, that he lay down his life for his friends.”

Japaljarri Spencer laid down his life for his family, for his countrymen and for the country. It was an act of love. It brought him much trouble. He gave everything away, money, motor cars, ideas. In return many people troubled him. He was patient with them. He was good humoured. He followed the line of law, the line of care, the line of clear thinking and the line of love. He has left a clear and strong track.

Eagle and Crow by Japaljarri Spencer, 2013:

This shows the life of a man. Any man.

You see him born into his father’s Jukurrpa, his family all around looking at him, singing. He follows his spirit and his Jukurrpa to bush camp. He becomes a man. The eagle, Walawaru comes. “Come with me – I will show you all your life.”

Eagle lifts him high in the sky. Eagle shows him a strong way for a man living in these times. He shows him how to work the white way and the black way together. Eagle gives him a clear sharp mind. He follows Jukurrpa. His vital spirit, Kurunpa, stays strong and intelligent. He learns many things, he works for people. Jukurrpa, Kurunpa and Mapanpa (power) run inside him. He learns and works in two cultures, English and Indigenous. He keeps his family together. They have a good time.

Karnka Crow is jealous. He calls out. “You come with me, have a good time, plenty of grog, plenty of women. Don’t listen to that eagle.”

He sits down in drinking camps. He gets lazy. He gets lost in town. He learns ganja culture, his mind changes, he kills women, he forgets Jukurrpa, Kuranpa slides away, he loses power, he lies down. Karnka sucks his blood. There he is, sick.

Walawaru comes again and lifts him up high. Eagle says, “This is your life. Use your brain. A man can choose. Which way will you go ?”

“I will stick with you”, says the man.

This postscript picks up some comments I made on ABC Radio this morning.

Japaljarri Spencer’s ‘Eagle and Crow’ story tells what can be the story of any man, as Japaljarri said. It was also his story. In his younger years, in a drunken rage, he killed a close family member.

He offered himself up, was punished by Aboriginal cultural law and Australian law. Then he made a choice, he used his brain and heart, he changed his life. He chose the path of the Eagle, not the Crow.

It should also be said that in the painting (seen there on the ground between the doctor and Spencer) the central line is marked by the track of Japaljarri’s own Jukurrpa, a ngangkari wana/snake who goes through much pain and scarring, and yet recovers in order to be able to help others – as an indigenous doctor. This is the tradition. In his many conversations with doctors, mental health workers and pastors, Japaljarri made it very clear that he knew he had caused suffering. I heard him speak very frankly (at night) about such private life events and his regret was made clear. But this remorse, this understanding and his feeling for others was the basis of his work.

The choice he made is clearly stated in the Eagle and Crow story. It would be fair to say that in this manner Japaljarri Spencer was also following a Christian way – a way he came to respect. He followed the Warlpiri Jukurrpa and the Christian way, with integrity, as do many of his indigenous contemporaries.