Grog plan: No dissent, some scepticism 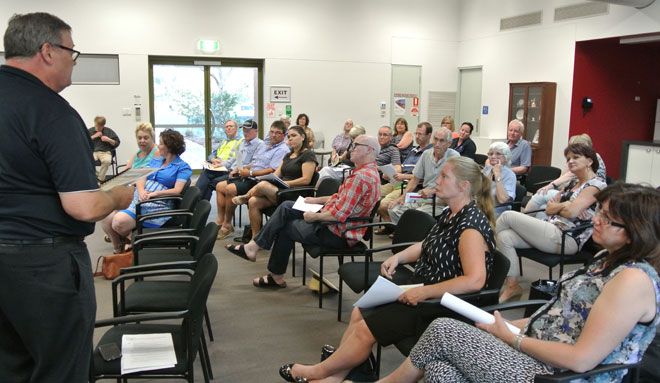 The ‘right to drinkers’ stayed away in droves: at last night’s small public meeting on the draft Alice Springs Alcohol Management Plan no voice was raised in protest about ongoing restrictions on takeaway grog purchases, nor about what amounts to a targeting of Aboriginal drinkers with the so-called ‘POSIs’. This is the new acronym for TBLs or Temporary Beat Locations, whereby police are stationed outside bottleshops to vet intending customers. POSI stands for Point of Sale Intervention.

Takeaway restrictions, in various iterations, have been in place since 2002, well and truly enough time to settle in. Some of the disgruntled may have found a way around them by mail order purchases. Finding a means of accounting for this source of supply in the consumption figures was addressed by more than one person from the floor – good plans need good data, was the argument.

Commander Danny Bacon of NT Police Southern Command dismissed this concern: police interest is less with a decrease in consumption per se and more about harm in the community. People drinking mail order alcohol in their own homes are not doing anything illegal. Police engaging with offenders know they are purchasing their supplies locally.

He didn’t make the point but could have, that the strength of the consumption data is reflected in a decrease in some of the more acute alcohol-related harms. Since 2006 consumption (wholesale alcohol supply) is down by 28%, with a 10% drop in the 2014 calendar year. From June 2014 to end of May 2015, alcohol-related assaults dropped by 22%; over the same period alcohol-related family violence assaults decreased by 23%.

The POSIs, an initiative of the police, enforce individual orders but also the blanket dry town and town camps bans. They were put in place from February 2014, which is what makes the recent drop in assaults so interesting.

Not surprisingly, apart from ongoing restrictions, they are the key plank of the new plan’s supply reduction strategy. An alternative to the way they now operate, involving a “point of sale identification system”, received no attention at last night’s meeting.

Marlene Hodder from the floor wanted to know what the document meant by “cultural connectedness”, the promotion of which is a goal of its demand reduction strategies. In the context of a Chief Minister who sees drinking as a “core social value” in the NT*, what kind of culture are we talking about, she asked.

Mayor Ryan didn’t want to be drawn on that: the plan was not about what the Chief Minister said. The input of residents in town camps has been specifically sought, in research undertaken by Matthew Campbell for Tangentyere Council. Reference group member Di Loechel, representing local hotels and licensees, said Mr Liddle was very concerned about people coming into town and not respecting that this is not their country. There needs to be “connectivity” between those different groups and the whole town, she said.

Mayor Ryan also pointed out that a strength of this AMP compared to its predecessor is its “broader approach” – outlying communities and roadhouses are being directly engaged.

No individual AMPs for town camps?

Talking of communities, Ms Hodder wanted to know what had happened with the local alcohol management plans that communities were supposed to be able to negotiate under Stronger Futures (former Indigenous Affairs Minister Jenny Macklin announced minimum standards for such plans in early 2013). She knows of one town camp that has its AMP sitting on the [federal] Minister’s desk, having been through the process three times in three years.

Well, according to Ms Loechel, having separate AMPs for each town camp will not be feasible. A global town camp plan will be required to work in with the Alice Springs AMP, she said.

A departmental spokesperson made much the same point, but it wasn’t really explained. For instance, there are some houses in the suburbs that are enforceably ‘dry’, at the request of their occupants. There are some residents in ‘prescribed’ communities who have permits to drink alcohol. Why could this kind of variety in controls not be translated to town camps, should they wish? 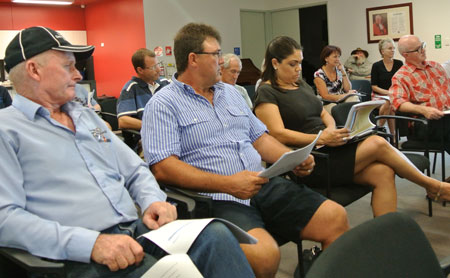 Ms Loechel also reported, without irony, that people in the the town camps don’t think it is their right to tell other people what to do, basing this comment on feedback from the research done by Mr Campbell.

Jonathan Pilbrow from the floor wanted to know if there had been discussion of a floor price, a measure known to reduce consumption and thus harms, supported the World Health Organisation.

Mayor Ryan said the group had had a couple of presentations on a floor price but the measure was not supported by a majority of members. This did not mean that it could not be raised again in the future, as the plan is a “living document”, with the ability to respond to changed circumstances over time.

A big issue for the group was “unsupervised youth”, he said. Since the draft plan was submitted to the Minister, the Town Council in collaboration with Congress (with funding from the NTG) has begun youth night patrols, which should help meet goals under both the Demand Reduction and Harm Reduction headings.

Councillor Jade Kundrenko from the floor wanted to know if there’d been any discussion of reducing the number of take-away outlets in order to reduce supply.

Mayor Ryan couldn’t recall. Dale Wakefield said there had been, but such an action was beyond the scope of the plan (she didn’t explain why). As CEO of the Alice Springs Women’s Shelter, she is on the reference group representing the interests of women, children and families affected by alcohol-related family violence.

Cr Kudrenko also wanted to know if there had been any discussion of issues around Foetal Alcohol Spectrum Disorder. On this, the group is waiting for the the NT Government to respond to the report to it  by the parliamentary committee chaired by Kezia Purick (the report has been with government for eight months).

Cr Eli Melky suggested a new partner for the group to work with, the Todd Mall Traders Association which had recently voiced its concerns to the Town Council about the impact of alcohol issues in the mall. This suggestion was welcomed.

Mayor Ryan had made the point at the start that a strength of this AMP is that each of its proposed actions is matched with lead partners taking responsibility for implementation. Once the plan is finalised, he said the group’s next step would be to evaluate and measure what has been achieved.

Uncle Peter Turner – without whom no public meeting in Alice Springs would be the same –concluded by urging everyone to pull together, the only way the plan was going to work.

Feedback on the plan is due by November 30.

* Reported by the ABC’s Kristy O’Brien, 24 May 2013: Chief Minister Adam Giles has defended the Northern Territory’s drinking culture as a “core social value”.

Speaking at an Australian Hotels Association (AHA) annual awards dinner in Darwin last night, Mr Giles said the tradition of “having a coldie” in a pub should be “enshrined” as part of Territory life.

“This is our lifestyle, this is the way we live,” he said.

Mr Giles said the Government would do its best to support the liquor industry.

“We all know the benefits of the Territory lifestyle, the opportunity and excitement around having a coldie, whether it’s at the Daly Waters Pub, at Bojangles, or the Humpty Doo Tavern,” he said.