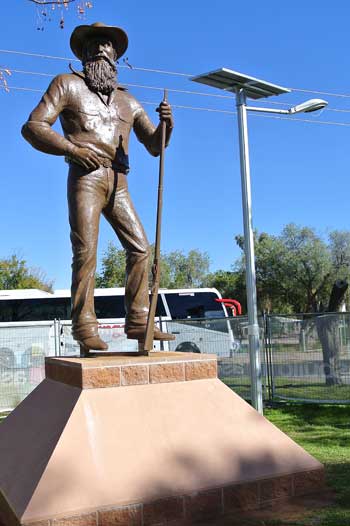 Sir – The Masonic erection on Stuart Terrace has finally been identified, with some plaques around the base.

The first plaque begins with an acronym of the slogan: “In The Name Of the Great Architect of the Universe.”

This surprised me, as I thought that there was some rule about the separation of church and state, perhaps our town council is made up of Masons?

I thought the council would be erecting statues and monuments in the name of the community of Alice Springs not in the name of some obscure religious group’s version of god.

The plaque goes on to say it is in honour of our greatest explorer, and names him as John McDouall Stuart. I can only imagine that the “our” refers only to the Masons, as I find it hard to imagine how the Alice Springs Town Council and community would think he was “our greatest explorer”.

He was not from here, he never came to Alice Springs, and he never explored or discovered any place or thing that was not already completely explored and well known to locals. In fact he and/or his men actually shot and killed members of one of our well-known and respected local families near Mt Hay as he was making his way through the MacDonnell ranges. This does not make him a great man in my book.

The second plaque does a good job of describing how inconsequential a man he was in a local context. It is headlined “John Stuart the Man” and goes on to say that he was born somewhere in Scotland died somewhere else in England and is buried there. So “the man” was born, died and was buried, fascinating!

The third plaque shows who is responsible for this erection, the Council and Masons etc.

The fourth plaque details the supposed exploits of this man and why he supposedly should be honoured. It is a very sad and misinformed version of history, not to mention how insulting it is to members of the local community whose families have been living here for countless generations.

It states that he was the first European to enter this country, which while true shows a complete lack of respect for the Arrernte peoples whose country he entered without permission and some of whose family members were killed by this arrogant man.

It says that he discovered Central Mt Stuart. This is laughable and insulting once again considering that family members of our local community had been happily living on and around this landmark for generations. What, they didn’t notice the mountain?

Most people from Alice Springs who have travelled up the track to Tenant Creek and beyond probably also deserve a statue because we have also discovered this mountain just like Stuart.

It also says that as a result of this bloke wandering onto Arrernte land that control of this place passed from the Commonwealth government to the South Australian Government. Sorry but the Commonwealth had no control over Central Australia at this time, they didn’t even know what was here.

At this time control of Central Australia was fully managed by the Arrernte people and other groups of people living here. But of course the existence of these people is completely ignored by this statue, which is really just a monument to the concept of Terra Nullius and the greed ignorance and arrogance of the Europeans that invaded and stole this country from the original inhabitants and rightful owners.

It is a great shame job in this time when everyone is talking about reconciliation for our council to erect this statue that denies the existence of Arrernte people and to place it in the heart of Arrernte country.

I call on the council to make recompense for the great insult they have dealt to the Arrernte people and other indigenous groups from our community by removing this statue, or in the very least recording the full and true history of Central Australia acknowledging the people whose land was invaded by this man and those that followed and paying for the installation of a similar monument that acknowledges and honours the original owners of this country.

PHOTO: The statue before plaques had been fixed on the plinth.