Anangu traditional owners are gathering at Tjitjingati, a significant site between Uluru and the West Australian border, to prepare for a ceremony launching the world’s newest Indigenous Protected Area (IPA).

As the IPA is already Aboriginal freehold land, nothing about the current public access regime to the Ayers Rock Resort nor the Uluru National Park will change as a result of the declaration, and neither will the use of the Outback Way.

The area is larger than Switzerland and includes the Lake Amadeus-Lake Neale salt lake complex. It will complete a vast network of nine protected areas in the NT/WA/SA border region.

The IPA will enable Anangu elders to work with Indigenous ranger groups to tackle significant threats to cultural sites and native plants and animals and to create jobs and enterprises.

“What makes this IPA stand out is its tourism potential,” said CLC director David Ross. “There’s an airport where large numbers of national and international visitors arrive every week, the Outback Way goes right through it and the landscapes are very dramatic, with spectacular mountain ranges, vast salt lakes and large sand dunes. It all adds up to huge scope for tourism development.

“Already a handful of families are pursuing their own cultural tourism ideas but the IPA offers a great opportunity to expand if that’s what people want.”

IPAs support Aboriginal landowners who volunteer to manage the cultural and environmental values of their country as part of Australia’s National Reserve System.

“They can get out on country for burning, clearing of water holes or ceremony and to take young people out with them and pass on cultural knowledge.”

Traditional owner Janie Miama said: “We really want to teach the young ones how to look after the place properly and strongly.

“This sort of work gives us a chance to travel around the country to show them all the places; to get out there and see all the waterholes and the important places, learn about them [and] learn how to look after them.” 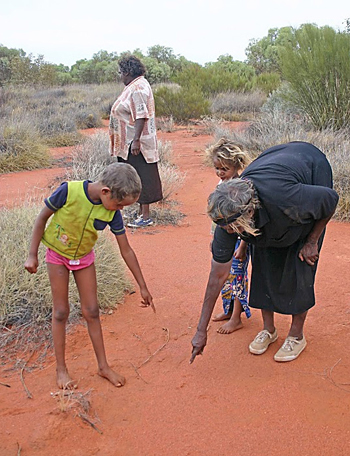 The agreement with the Commonwealth was five years in the making and marks the creation of the fourth largest protected area on the Australian mainland.

Traditional owners are electing the Katiti Petermann IPA management committee today. At the declaration at 11 am tomorrow they will perform an inma (traditional ceremony) about “the children that got taken away”.

TEXT and images contributed by the Central Land Council.