Every hill got a story 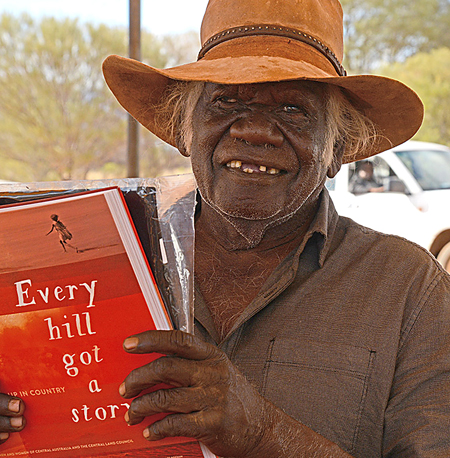 Eminent Aboriginal men and women from across Central Australia are preparing to launch Every Hill got a Story, the Centre’s first comprehensive oral history collection.

Every hill got a story chronicles the breathtaking rate and scale of change experienced by 127 notable Aboriginal people, as told in their own words and many languages.

Along with testimonies ranging from living off the land to negotiating their place in the digital age the book features many previously unpublished photographs and a foreword by film maker Rachel Perkins, daughter of the CLC’s first chair, Charlie Perkins.

“Everybody is invited to join us at the launch, enjoy a slide show of the historical pictures and listen to our stories,” said CLC chair Francis Jupurrurla Kelly, one of the storytellers.

“We picked the Telegraph Station because it holds a lot of memories for some of the people who were interviewed for the book, back when it was known as the Bungalow,” he said.

“Not all of the storyteller names will be familiar to everyone but to us they are famous because they have all played big roles in strengthening their communities, growing our organisations and fighting for our land rights.

Mr Kelly chose a quote from his late predecessor, Kwementyaye Stuart, as the title of the book.

“Mr Stuart worked hard to make governments understand that land rights are the most important thing to us. He said that the land and its stories are our life and without it we have nothing.”

“Too many storytellers and contributors have passed away since we started on our book. Every hill got a story is our way of remembering them and saying thank you to their families.”

CLC director David Ross said the book is a timely reminder that four decades after representatives of Central Australian Aboriginal communities elected Charlie Perkins and after Gough Whitlam poured sand into Vincent Lingiari’s palm the fight for land rights is far from over.

“We want the next generation to know that what is left of these hard won rights remains under threat,” Mr Ross said.

“It isn’t possible to read Every hill got a story and to remain ignorant about why being on country is not a ‘lifestyle choice’ for the storytellers.”

“They endured the paternalism of the missions and the strict control of government settlements, escaped the massacres of the frontier wars and came through the heartbreak of the stolen generations,” he wrote in his introduction to the book.

“They greeted the promise of the land rights and self-determination era – only to watch their grandchildren subjected to today’s new paternalism and radical denial of their collective identities and land ownership.”

PHOTO: Central Land Council delegate Frankie Holmes from Antarrengeny outstation near Ampilatwatja was one of a dozen storytellers who received their author’s copy of the CLC’s new oral history collection Every hill got a story at Wednesday’s Council meeting at Ikuntji.