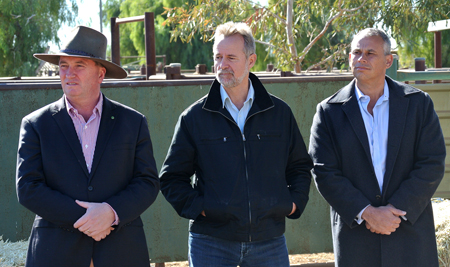 Two interest groups are asking questions about the assets, believed to be worth about $100m, owned or controlled by the Alice Springs based Aboriginal investment company, Centrecorp.

One group are Aboriginal owners who want to know what’s happening with their money. Dozens of them have over the years asked the Alice Springs News Online to investigate this.

The other group are taxpayers who are wondering when the Centrecop wealth will finally be used to ease the burden on the public purse of Indigenous affairs in this region.

Federal Minister for Indigenous Affairs Nigel Scullion could easily answer those questions because Centrecorp’s largest shareholder, the Central Land Council (CLC), is a Commonwealth statutory authority that is under his control.

But Senator Scullion, in the interview published here, makes it clear he is not going to do that. (Senator Scullion, centre, is pictured with Barnaby Joyce, left, and Adam Giles, at the NT launch of the Agricultural Competitiveness White Paper in Alice Springs last week.)

So the real estate and business empire will continue to be run, behind closed doors, by a handful of people in charge of a Pty Ltd company which has minimal disclosure obligations, unlike stock exchange listed companies do.

And tens of millions of taxpayers’ dollars a year are continuing to flow not only to the CLC, which has an annual budget of more than $30m, but also to the Central Australian Aboriginal Congress and Tangentyere, which each have two shares in Centrecorp. (It has a total of seven shareholders.)

Elsewhere Senator Scullion is not hesitant about the need for transparency of Indigenous organisations.

Yesterday he announced a forensic audit of the Anangu Pitjantjatjara Yankunytjatjara executive board, with the purpose of ensuring that it is “properly accountable – not just to government, but also to communities on the APY Lands”.

But of course, he’s unlikely to be suffering electoral fallout from that: He is not a Senator for South Australia, but for the Northern Territory where about a third of the population is Aboriginal.

In November 2008, a performance audit of Centrecorp Aboriginal Investment Corporation Pty Ltd was carried out by the Office of Evaluation and Audit (OEA). At that time a Labor government was in power federally.

The audit report detailed “total Australian Government benefits” to the Centrecorp group of $25m, including a $19.6m transfer of shares in Yeperenye Pty Ltd and $800,000 worth of shares in the Peter Kittle Motor Company.

This financial involvement is surely another reason for Senator Scullion to show more interest in Centrecorp than he is currently displaying.

The report found no flaws in the use of government funds for businesses in receipt of them, made no comment on the group’s other businesses, but urged much greater public transparency: “Whilst acknowledging that Centrecorp is a private company it has received substantial support from the Australian Government over the years because it was established for the benefit of Aboriginal people in Central Australia.

“For this reason it is important that it take steps to significantly improve the transparency of its operations.

“Centrecorp should consider how it can provide more public knowledge about its objectives and strategies for providing benefits to Aboriginal people in Central Australia.”

The most recent enquiry about Centrecorp by the News was made in March this year when the CLC denied to us that there had been a change of shareholding in Centrecorp.

We replied by emailing back an ASIC company extract we had obtained in April 2006, which showed the original shareholding configuration, namely CLC three, Congress and Tangentyere one each. It was still the same during the 2008 audit. Yet the Centrecorp website shows now that there are seven shares, with a three, two and two split as detailed above.

We asked to discuss the reasons for the change. The CLC media office replied that they were too busy, and this was not a high priority for them.

Our coverage of Centrecorp goes back to at least 1998. Our reporting, later picked up by national media, sparked a Senate inquiry (also covered extensively by the News) which cast light on significant aspects of Centrecorp, but fell well short of presenting a complete picture.

In the absence of answers from the CLC, these seem to be the processes in play for Centrecorp investments other than those dealt with in the OEA report of 2008:-

Money being invested in or by Centrecorp comes – initially – from mining royalties and presumably, subsequently from re-investment of dividends.

The CLC insists that the Centrecorp investments are not royalty money, but private funds, presumably because once the royalties have been transferred via the CLC to royalty associations, these can then dispose of the funds as they please.

The CLC has never given any indication from where else that investment money could have come from.

The News has received reports from people attending royalty meetings at which Centrecorp staff had urged recipients to invest in ventures.

No doubt the intention of the land rights act was to achieve Aboriginal self-sufficiency rather than for the deleterious effects of sit-down money and passive welfare to wreak their havoc forever. Should Centrecorp start playing a significant role in this now?

For example, there could be a far higher proportion of local Aboriginal staff in Centrecorp owned businesses, or those in which Centrecorp has a substantial share.

But to see what happens to people asking questions about Centrecorp one needs to look no further than the CLC’s immediate past president, Maurie Ryan (google this site).

Or go to the CLC’s official website, type Centrecorp into the search field, and this is what you get: “No Results for ‘Centrecorp’. Sorry about that.”

NEWS: Do you know what assets Centrecorp owns or controls?

SCULLION: I don’t have access to the exact numbers. That’s a matter for a private organisation. Centrecorp makes its own decisions about its investments. There have been some Parliamentary inquiries into that matter but I haven’t had brought to my attention any particular concerns of late.

NEWS: The CLC, which answers to you, has the biggest shareholding. Do you not have an interest to be informed about that?

SCULLION: I certainly do. The Central Land Council is a Commonwealth statutory authority. Perhaps you could put the question in a way of identifying the mischief. What particular mischief are we looking for?

NEWS: No mischief. Centrecorp is believed to be in possession or control of assets worth around $100m so they should be making around $10m a year in profits.

SCULLION: 10% dividend is nice if you can get it. I acknowledge that if they own a substantial amount of property, if they have invested it properly, then it will be making a profit, yes.

NEWS: Is that profit taken into account when you allocate money to the CLC, Tangentyere and Congress? They are the other shareholders.

SCULLION: We do provide a funding stream through the Aboriginal Benefits Trust Account (ABTA) to the Central Land Council. No, I am not aware that other income is taken into account with that, although the CLC, in their annual report, which is a public document, provides the total amount. I don’t see any income being provided to the CLC from Centrecorp or other income streams. There are some small recurrent income streams from mining companies in terms of administration of particular deals that are done.

NEWS: Should the amounts from investments be taken into account when public funding is given to these organisations? After all, when royalty entitlements for Aborigines were legislated for, the purpose was for Aborigines to have an income that would, at least in part, offset the need for public funding.

SCULLION: What I understand to be the case is that a third of the ABTA funds are [paid to] the two land councils, to run their administrations. As I understand it there is no legislation to hypothecate profits from Centrecorp nor from any other investment arms. The Northern Land Council have other investment arms that happened about the same time as ATSIC. They were set up to look after assets that Aboriginal people had. I am not aware that there is any requirement for them to hypothecate profits from that private organisation back to the land council. And certainly, the year book from the land council doesn’t reflect that would be the case.

NEWS: Should it be, in your view? We have a lot of people asking us, what’s happening to the money from Centrecorp? Who owns it?

SCULLION: The shareholders, ultimately, of the CLC should be the membership of the land council. I am not sure where the profits from Centrecorp do go. They are a private organisation and that would be a matter for the people who are on that board. From my perspective, and my responsibilities, there is no requirement for these profits to go back to the land council. Its members have a stake in that profit’s disbursement. I have little knowledge of it nor of any dividends. I’m not sure if it goes back to the members or not.

NEWS: As the Minister responsible for the land councils, are you not able to enquire into any shareholdings the CLC has and what it does with any dividends? Have you asked them?

NEWS: Are you saying that the income stream the three shareholders may be getting from the investments would not affect the judgment of the government in allocating funding from the public purse?

SCULLION: The land council? No, it doesn’t. It is a separate organisation. Whether they have share in property, they might make money on a cattle property, that is also not taken into accounting in regard to the convention of funding for the land councils.

NEWS: And does that also apply to Congress and Tangentyere? In fact if these two got together they would out-vote the CLC four to three.

SCULLION: I am not aware of how the dividends would flow to any of the shareholders. I am unable to comment on that.

By KIERAN FINNANE The reinvention of the Alice Plaza – and its owners' attempts to involve the Town Council in their plans – prompted the...
Read more
Issue 10