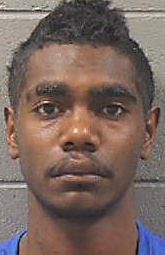 Alice Springs Police are searching for 16-year-old Jason Patrick Reid who escaped from the Alice Springs Detention Centre at about 5pm yesterday.

Acting Superintendent Virginia Read said he is of Aboriginal appearance, about 170cms tall and thin build.  He was last seen wearing a black singlet, and black tracksuit pants with white sandshoes.

“Anyone who may have seen him please call them on 131 444.  Reid was detained on a number of serious charges and if sighted, should not be approached.

“A vehicle has been reported stolen from this vicinity. It is a white Toyota Troop Carrier, Northern Territory Registration 773481. This vehicle has an orange light on the roof.”

Reid has been arrested by police from Katherine, Mataranka and Elliott, along with the Dog Operations Unit arrested the male near the Elsey Memorial Cemetery turn off on the Stuart Highway, 15 kilometres south of Mataranka, at about 3:20pm.

Police say they will allege he stole a Troop Carrier in Alice Springs this morning and travelled north on the Stuart Highway.

He remains in Police custody and is being transported to Katherine Police Station.