Homelessness can be just a heartbeat away 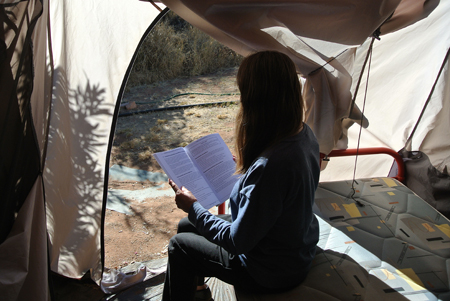 Kate hasn’t had a home since October last year but she spent only one night sleeping on a park bench: Her story shows that homelessness has many many faces in Alice Springs, and that destitution can become a reality in the blink of an eye.

What’s more, non-Indigenous females not exposed to domestic violence are the part of our demographic on which the town has turned it’s back: The Salvos have a men’s home for all races; Aborigines are catered for in several hostels which will not admit whites; and the Women’s Shelter will – generally speaking – not admit a women unless she is facing a documented threat.

Kate (not her real name) can now see the light at the end of the tunnel, but from one day in October last year “I was panicking” much of the time. She repeats that phrase many times in our conversation.

The attractive, well-spoken fifty-something woman was in a share house in the Old Eastside for seven years.

She began to feel “not comfortable” with some of her housemates. One persisted in coming into her section of the yard, pretending to be looking at the lime tree she had planted, despite explicit requests from her not to do so.

“The man smoked dope a lot and seems to be mentally ill,” she says.

The problems persisted despite a restraining order placed by the police.

“I am not a snob but my friends told me I have to protect myself. Don’t be too friendly, women told me.”

She decided to move out. As it happened, the landlord had been about to give notice anyway, because he planned to demolish the house.

Kate says apart from a sister in Tennant Creek, who is “less affected by our family’s brokenness,” she has no family network.

Her parents were immigrants, a Polish father and Lithuanian mother. He father died when she was five, and her mother in 1988 “when the tall ships came”.

The mother had been hard-working and looked after her kids well, but “there was no affection, no feeling of togetherness, cold”.

Leaving the share house plunged Kate into a brutal reality she had not expected and was not prepared for.

The bottom line was that the dole (partly in the form of the Basics Card, which she welcomes) paid her $500 a fortnight. Units in caravan parks are priced between $300 and $400 a week.

Kate picked up casual work wherever she could – cleaning the Ghan train, cleaning houses or businesses, doing stock takes – but it wasn’t enough “to get back on my feet”.

Centrelink loaned her $500 to pay a bond but offered no rent subsidy, she says. And her turn on the waiting list for public housing hasn’t come yet – and she doesn’t know when it will.

The low cost and crisis accommodation scene has changed since the 1980s, she says. She came to Alice in 1980: “It was easy to live here.”

The caravan parks used to rent cheap vans – no longer.

Hostels which had catered for all comers – black, white, long-term locals, backpackers – are now resolutely turning away non-Indigenous guest.

At the shelter of a women’s outreach service she is told bluntly that help is given only in cases of domestic violence.

“I believe in God. He helps me,” says Kate, repeatedly, as we talk.

Centrelink gave her list of hostels. Again, it turns out all of them take Indigenous people only, except one which will accommodate remote area health personnel.

“The women’s shelter can bend, if you’re out on the street, but only for two or three days.”

Kate had several stints in backpackers’ hotels, a dismal proposition for someone looking for a home: In one place she paid $140 a week for a bed in a room she shared with up to seven other people, men and women. It’s clearly not a bad deal for the operator, nearly a thousand dollars a week for one room.

“There is no facility for women getting on their feet,” says Kate.

Mission Australia proved to be an exception: Two staff sat down with her, listening to her story. She describes them as “fantastic, warm”.

They arranged for an old tent from Vinnies and paid the rent at a caravan park for two weeks.

Kate was able to scrape together enough money to stay for three weeks, making contact with a few people, some good, some not so good – people on drugs and with criminal records.

A young man, dabbling as a freelance tour guide, fell into the “good” category, allowing her to borrow his eight man tent while he went to South Australia temporarily.

And that tent, set up in the backyard of a religious couple, became Kate’s home for several months, with access to an outdoor shower, wash-up and toilet facilities, until she, this week, found a small backpackers hostel where, for $140 a week, she will share a room with only one other person.

Meanwhile Kate is studying for a Community Service Work Certificate 3 level, a VET course, at the Charles Darwin University.

UPDATE:
The Charles Darwin University provided the following information about the course: The Certificate III in Community Services Work course comprises eight core and five elective units and generally takes between 500 to 600 hours to complete. It generally takes a student about a year to complete the course, although there have been some who complete in six months while others take three to four years.
The variation in the time taken to complete the course may vary depending on a variety of factors including an individual’s skills and abilities, and the time they are able to commit to training. For example, a student with young family commitments may take longer to complete their studies than a student with significant community services experience.
If a student has industry experience through employment and voluntary work in the community services sector they can also gain recognition of these skills through the Recognition of Prior Knowledge (RPL) process.
If the student presents a well organised complete package of evidence to demonstrate their skills and knowledge they may not need to attend training classes.