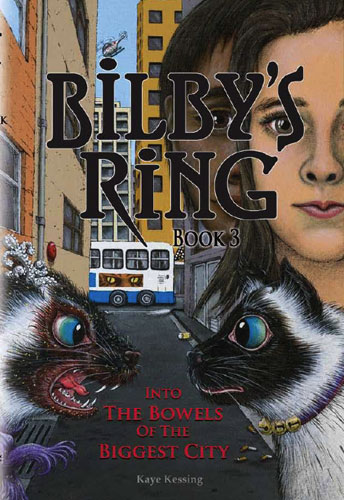 and a plea for help

Twenty years in development, five years in the dogged making, Kaye Kessing’s Bilby’s Ring trilogy is now a reality. Through Kessing’s vivid illustrations and text, it tells over three volumes the story of Bilby, who has just lost his mother to a fox in the vast red deserts of Western Australia. Chuditch the Quoll, her species long since gone from those regions, persuades a very reluctant Bilby to set off on a fact-finding mission: seeking a place safe from introduced animals. Urged on by two old firekeepers, then a blind Golden Mole, they travel much further than intended, joined by Mala the Hare Wallaby, Numbat and Sticky the Sticknest Rat, all similarly endangered.

As the five meet other creatures in trouble, their aim to seek a place of safety turns into a quest on behalf of many: to seek help from the humans in The Biggest City by The Endless Sea. There, after crossing seven major habitats and many near-disasters, the place where they must seek the ultimate help, holds its own hideous danger, in The Bowels Of The Biggest City!

This gripping adventure – at times hard-hitting but often haunting – explores themes both physical and moral, from the mounting environmental problems across our country to the ultimate importance of kindness and hope. For eight to eighty plus year olds, Bilby’s Ring is an environmental geography of Australia, an invitation to see this land through other eyes and a plea for help.

Hundreds turned up on Sunday to celebrate Kessing’s feat at the Olive Pink Botanic Garden. Children in costume enjoyed a battle of natives versus the ferals before the trilogy was launched by singer-songwriter, author, historian and former Territory administrator, TED EGAN:-


I was born in 1932, but for today I start my telling in 1945, a memorable year to me for three reasons: one, World War Two ended; two, President Roosevelt died; and three, a psychopathic, not so Christian brother – totally out of character – read my class, on a chapter a day basis, Frank Dalby Davidson’s book, Man Shy.

There we were, 40 sticky out eared, pimply youths in Melbourne, 13 to 16 years of age, struggling with the agony of puberty, sitting enthralled at the exploits of a calf, as it survived the many dangerous and often tragic events in its life. We were spellbound.

Well, I have recently undertaken an exhausting, epic journey with five admirable companions. As one of our party – named Numbat – said, along the way, to a duck:

“We will not hurt you. We are creatures from the Great Red Sand Land – far to sundown way.   We have come across this great wide land to seek help from the humans in the Biggest City by the Endless Sea. We go there to speak for all creatures in trouble.” 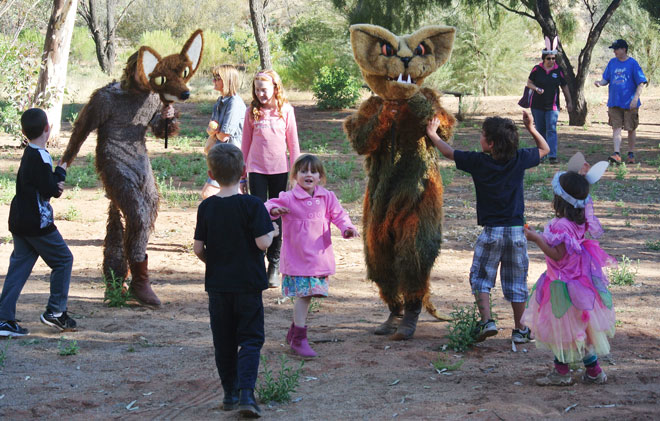 What a journey. Yes, I am exhausted.

Now, Nerys and I have driven about 40,000km in the last six months, travelling the same great wide land in my old Toyota. On our long days of driving we often think of the admirable firekeepers who travelled the land on foot in their management of what Bill Gammage calls “the world’s greatest estate”. We think of the takers, the boat people who took over management of the estate, as they travelled, first on horses and camels, then on the various “two tracks” – motor cars, trucks and trains. We are in most cases full of admiration for the good “takers”, we deplore the tricky and deceptive bastards among them, but in many cases we are impressed by the tenacity of those humans, for we followed their tracks.

But the humans don’t rate with the heroic Bilby, Chudditch, Mala, Numbat and Sticky. They did their journey – by paw, claw, sense of smell and relentless tunneling – through the various environmental hazards, to escape the threats encountered as they met the various ferals and takers who did not understand the country and in many cases should never have been here in the first place.


Fortunately, at all times, the travellers could call on the wisdom of Walpajirri, Bilby’s late mother, whose untimely death prompted the whole adventure. Walpajirri was steeped in the ethics of “the telling” and she transmitted a simple, straightforward message in her songs: if we all knew our places and stayed in them, life could be, should be, happy and productive. There is no need for wars and conflicts, there is room for everybody as long as we know the rules and obey them.

Bilby and Kaye Kessing (pictured below) have combined, to tell us the rules. 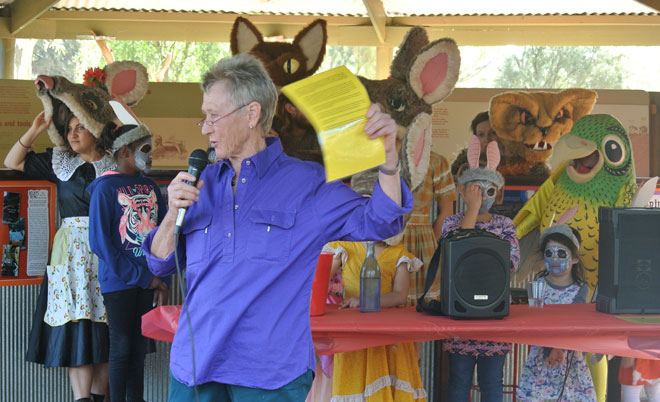 Moses brought down two tablets from the mountain as a means for giving the humans their version of the telling. Bilby and Kaye have put it all down in the three books that we celebrate today.

It’s a delightful, if frightening journey. I’ve never been through so many harrowing experiences and I could really only handle a chapter a day. But that’s ok: I think that’s the best way to absorb the detail and the knowledge that is imparted in these books, in these paintings.

I met so many fascinating characters, good and bad. I was usually given some warning in advance of what to expect. It was a bit like reading Dickens. When you meet Scrooge, Mister Pumblechook or the Beadle, you know what’s coming. I don’t need to tell you what a bunch of bastards were Scrags, Spanner and Drainpipe. Yet I knew I was going to respect Snow the minute I met him on his river. Snow told us the Great Brown Land’s human history in a couple of sessions of profundity, around the quintessential campfire. I am sure Snow, a Barkindji man, would be happy if the original name for his river could again be Barka, for the human inaptly named Darling who “took” the name – as they do – was not a darling at all: he was something of a feral monster. Dickens would have named him Governor Fox.

I have a better understanding of this vast land, having experienced the crumbly hills, the big bloodwood forest, the great red rock, the great wet lakes, the formidable salt expanses, the wide red rivers, the fish-filled wet rivers, the land of the “so fats”, over the mighty mountains, until we finished up in the bowels of the Biggest City by the Endless Sea. 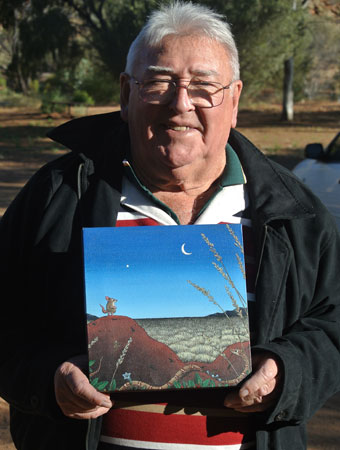 Despite loving my mate Bob Rummery’s song about his dog – he can do everything but talk and he wouldn’t if he could – I now know that all creatures can communicate, even if many of them have idiosyncracies, like draaaawling caaaamels and st-st-st-stuttering f-f-frogs.

How best to transmit this message? Well, obviously let’s all start by buying the trilogy.

When I was administrator of the NT I was patron of the Duke of Edinburgh scholarship scheme. To my delight I found that one of the points-scoring activities was to have quality time at Old Timers home. I mentioned that to Bill Gammage who said all of our orphanages should be in old timers’ homes. So I can envisage a chapter a day with grandparents and grandchildren, for they have, as Margaret Mead tells us, common enemies in many cases. The best gift that can be bestowed on young children and old people is your time. So let’s rekindle that old skill of story-telling.

A few years back Nerys and I were at a folk festival. Nerys was MC at a concert. There were interminable delays as one band after another took time to “set up”. So Nerys, in between acts said, “I’ll tell you an old Welsh story about Gellert’s dog.” She gave the audience a bit more of the story in between acts. As the concert proceeded a discerning patron stood up and said, “Forget the bloody music, tell us about Gellert’s dog.”

That’s the way to do it. Tell the story, one way or another. Establish a heading “the environment” on the school curriculum. Learn the lessons. Make the film. This is a fantastic film. If we can applaud films like Avatar, Lord of the Rings and Harry Potter, we can certainly welcome an epic, filmic re-enactment of the journey undertaken by this character, our hero, Bilby, as he and his soulmates travel this Great Brown Land.

Congratulations Kaye Kessing for fulfilling your life’s dream. Now take the message to the nation.

Congratulations Eleanor, Ali and all others who have been mainstays. Thank you Ian and all at Olive Pink for staging this happy gathering in this wonderful place in this unique town.

By the powers vested in me in “the telling” as one of the “concerned takers”, I hereby declare Bilby’s Ring to be “a goer”. 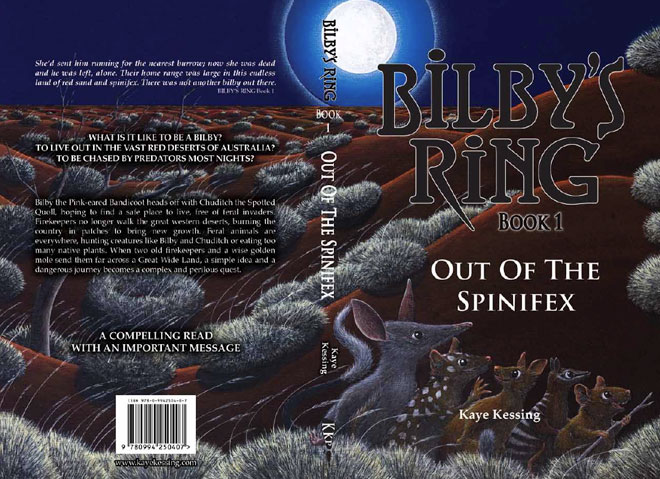