Two shows get to the heart of the matter 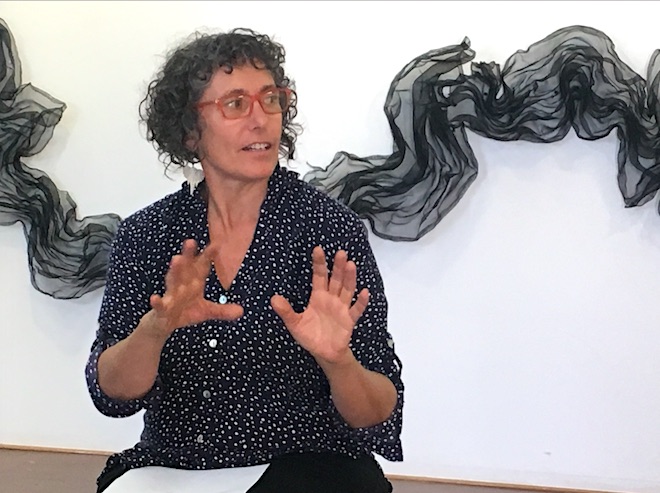 The times are more pressing than ever for artists to concern themselves with existential matters and two exhibitions drawing to a close this weekend do just that.

The source inspiration for J9 Stanton’s Shifting Currents, showing at Watch This Space, is multi-layered. Before going there though, an impression of what you see on the gallery walls. 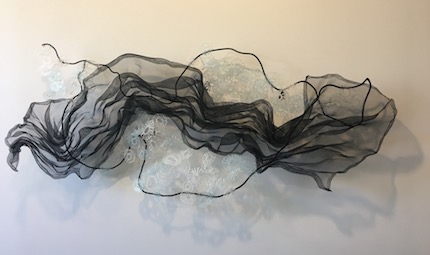 My thoughts went first to veils, mourning veils, marking the ebb and flow of life. This was reinforced looking at two of the smaller works, where lacy patterns drawn with 3D pen are worked in with what I was reading as black tulle (although it was obviously a more robust material, in fact black aluminium mesh). I was thinking of mantillas on bowed dark-haired heads, women in procession, their passing shadows cast on the white walls.

The scale of other works suggested less intimate contexts: powerful and complex pushings and pullings, much larger forces at work.

Both hold true – the strength of this show. Through the rigorous working of the image of current and of her chosen material, discarded aluminium mesh, Stanton makes a poetic leap from her mother’s dying breath to the life-giving grand-scale movements of water and air.

In her artist’s talk she spoke movingly of sitting with her mother during her final days, passing from last breath to no breath, from life to death, a “spiritual” experience, while she also explained the specific link to the patterns of ocean currents off the east coast of Australia. 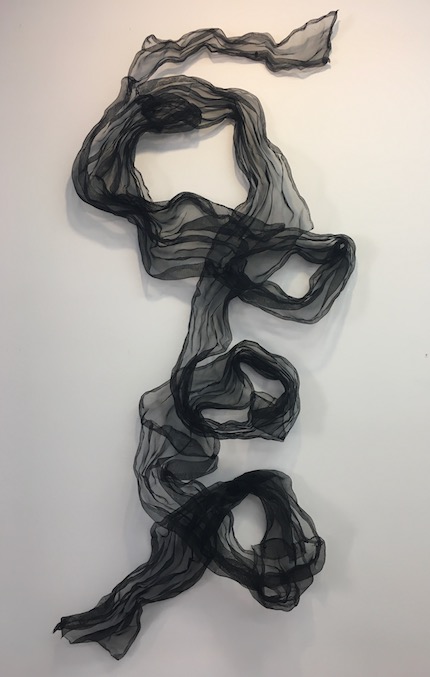 As the oceans warm, photosynthesising phytoplankton are shifting to cooler waters. Given that they are responsible for over 50% of oxygen in the atmosphere, Stanton (and scientists and environmentalists the world over) is worried about how this will impact on the air we breathe.

Thus the show’s logic could be that we as a species are sitting beside our dying mother (Earth), heedlessly, recklessly. Nothing spiritual in this vigil.

The beauty of Stanton’s work – which she attributes to her mother, “a very beautiful person” – and the refined focus of its exploration of form and material lift it above such a dispiriting conclusion. The show acts rather as an invitation to come into the presence of breath, life in other words, at intimate and vast scale. Primal, yet vulnerable, so vulnerable.

In Groundswell, showing at Araluen, June Mills is on the same wavelength. She directly invokes Mother Earth, as having given us “everything we need to survive”, manifest in “beautiful water”, now vulnerable to “irreversible” damage from fracking: “Fracking is a short word for fracturing Mother Earth,” she declares.

On the page these thoughts may fall somewhat flat. Mills, a well known Larrakia Elder and figure in the Darwin cultural scene, sets them on fire with a song that she hopes will “go viral”, stirring “a revolution”.

Its dance beat is irresistible as is the sheer force of Mills’s personality and conviction, captured on video which plays in the gallery: first her rousing and funny speech breaking into song, urging her audience to “Go nuts!”, which they then do at the beach, dancing around her as she sings, an activist Queen. 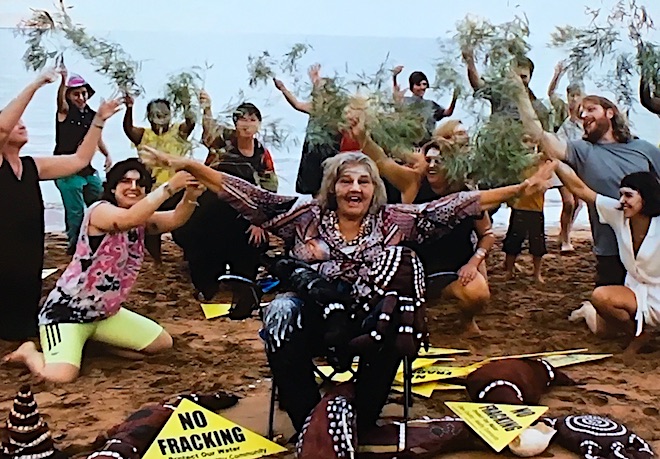 This is a very different approach from Stanton’s to making art that carries a message, courting the danger of having a one shot impact. But Mills pulls it off, utterly disarming with the simplicity of her attack, inspiring in her call to arms.

The group show is curated by Top End-based Carmen Ansaldo with activist intent and comes complete with an “Activist Toolkit”. For a small exhibition it is also quite heavy with didactics, around themes developed out of community consultations, that included locally a Central Arrernte custodian of Mparntwe, Elaine Peckham, and prominent environmentalist as well as Town Councillor, Jimmy Cocking.

At the opening (more than a month ago now) both of them made important points about the “two worlds” of water access in the Centre. Peckham drew on her lived experience, of being out on her homeland, just west of town, at a time when there were no houses, no water: “We had to go back and live like our old people had done,” fetching water from nearby Jay Creek.

She challenged the “sarcastic” term “Golden Mile” used to refer to her homeland. For her there was nothing “golden” about the struggle that families had to eventually get piped water to their land.

Cocking took up the theme, pointing to the ongoing “stark two worlds of access”, where people in municipalities live with the legislated requirement of access to a safe and assured water supply, in contrast to various remote communities faced with very real water shortage or contamination issues.

The gap in entitlement is becoming even greater with the extraordinary water allocations to industry. He mentioned in particular the example of Singleton, allocated for 30 years 40 billion litres annually – four times the yearly consumption for whole of Alice Springs – to grow vegetables for the Chinese market.

“The aquifer will never recover,” he said.

Twenty Territory artists have contributed work to this show, the majority tackling its themes head on, while some approach them more at a tangent, seeking to evoke what we stand to lose.

What they all do, as does Stanton, is leave us with the perennial question, “What are we going to do about it?” In terms of raising awareness, they themselves provide some answers.

Note: J9 Stanton’s Shifting Currents finishes this Saturday, 24 April. This is a rare solo gallery show from Stanton, better known for her contributions in a wide range of media  to group shows and events in Alice Springs over two decades, as well as for her public art commissions.