Better 'destination' parks and none will be sold

Above: Neighbourhood Day at Finlayson Park on March 29. Local residents strongly support their park, picking up rubbish in it regularly and reporting any problems to the Town Council. On this day they also planted 30 trees and held a community barbecue, attended by the Mayor (below left). Council hopes this “Park Watch” model will be picked up by other neighbourhoods. Photo courtesy local resident RUTH ELVIN.

The Town Council will make a long term commitment to improving its network of parks without selling any.

Councillors last night considered four options for its Open Space Network, presented by consultants Ross Planning (based in Queensland). Residents had been asked to comment on the options in an online survey, with more residents supporting a ‘do nothing’ option than the one council has finally chosen. 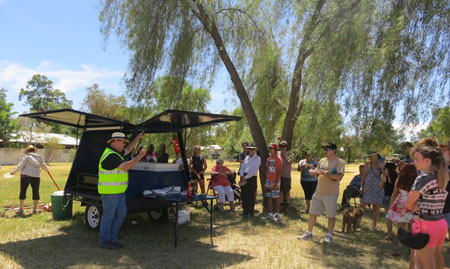 ‘Do nothing’ would in fact mean maintaining the status quo, but even that would end up costing council more, with significant increases in power, water and sewerage costs expected.

“For the considerable increase (48%) in operation costs over a five-year period … there is no improvement to the park network,” comment the consultants. They also pointed out that this option would not meet council’s own guidelines for provision of open space in new subdivisions.

Pushing for a more ambitious approach was Councillor Chansey Paech. He was keen to have a decision on the issue, no matter what, as it has been on the back burner for a long time. Despite the results of the survey, he wanted a more strategic and visionary approach, as reflected in the consultants’ Option Three.

Under this approach no parks would be sold but some would be downgraded, offsetting upgrades to others. Fewer park assets, ie play equipment, would go into “local recreation parks”, which would be maintained as open green space with shady resting areas and seats, and pathways offering connections between residential areas. 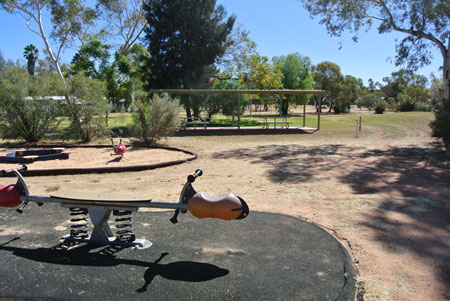 Seven existing parks would be maintained or upgraded to “destination parks”, distributed across the town and generally located near other community infrastructure, such as sports complexes, schools, health hubs and retail hubs.

Frank McEllister Park at Araluen and Frances Smith Memorial Park on the Eastside (at right, and its flourishing community garden, below left) are already recognised as destination parks. The others identified for upgrading by the consultants are: 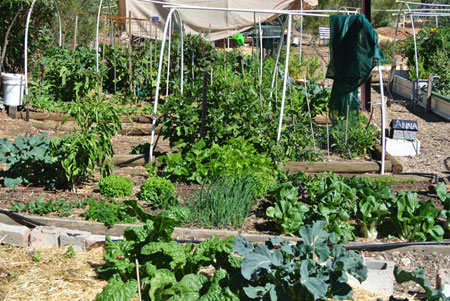 “Due to the limitations of Council’s resources, the level of embellishment is not like to reflect the ideal park network, however, this option improves the overall quality of the network from a community perspective,” say the consultants.

Water-sensitive design will contribute to cost efficiency, and other gains (some 10%) to the overall parks budget will come from reducing irrigation to small parks that are “unlikely to be used for recreation by residents”. One example the consultants identified is the “strange” Clara Court Park in the Gap area, accessible only via narrow pedestrian pathways, with two circular irrigated turf areas but no shade, limited play opportunities, no picnic table and no visibility into the park making for poor safety. The Gap’s other local recreation park, Wallamulla, has a number of advantages and should be the subject of improvements – shade, a small turf area, and a picnic table.

Mayor Damien Ryan and Cr Brendan Heenan were reluctant to not follow the community lead (such as it was – 107 valid responses to the online survey) and thus supported maintaing the status quo.

Cr Eli Melky didn’t think that the 51 people in favour of the status quo was enough of a base upon which to make a decision for the whole town. And doing nothing would be “a sad story”. He backed Option Three and pushed for council to align its parks planning with planning for sports facilities, to maximise the return to the community. He pointed to the possible strategic value of $4m recently committed by the NT Government to improvements at Rhonda Diano Oval and the netball courts.

Cr Paech thought that this presented an opportunity for working with the community to have things “going on in those spaces”, such as community gardens.

Mayor Ryan pointed out that it was the third choice in the community survey, but Cr Bonanni countered that “people will get a better deal” with Option Three. She also saw it as fairer to all areas of the town.

Subject to the decision being formally voted on in the affirmative at the end of the month meeting, council officers will then start preparing an implementation plan.