Time for a date? 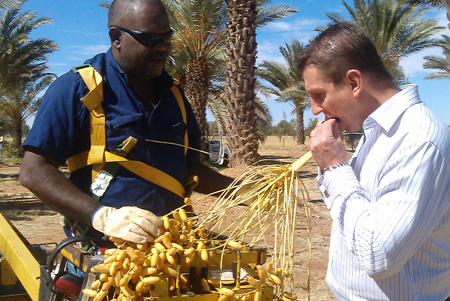 Provided you have a lot of time, he should have added – and water.

How long does it take for a date palm to grow fruit?

“That’s probably a technical question that the department would be able to answer.”

How many electoral cycles?

The answers are: The first fruits grow after about five years, and then it takes at least another 10 until a palm becomes profitable, according to Bob Williams, of the department’s Plant Industries Group, who was traveling with the Minister.

There are just two commercial date farms in the NT and only 50 hectares of dates nation-wide, according to a media release from the Minister.

The palms each need 700 litres of water a day. Despite the current heated debate about water, Mr van Holthe – in town “committed to advancing the horticulture industry in Central Australia to tap into new, lucrative markets,” not just dates, and intent on “investing heavily in land, soil and water resources” – was caught out on The Centre’s water supply.

Said the Minister: “Of course, there are limited water resources … we want to make sure that we get the very best we can out of [this] resource.

“We want to make sure that the development matches the water availability in the Alice Springs region.”

How much money will be spent on the discovery of new water resources and what areas are involved?

“The government has committed significant resources across the NT. $2m is allocated to a brand new drilling rig [to be used across the NT] so we can de-risk commercial investments.”

How many exploration wells will be drilled in Central Australia in the next year?

“Talk to Water Resources. They’ll know the answer, I’m sure.”