Self help not part of the welfare mantra 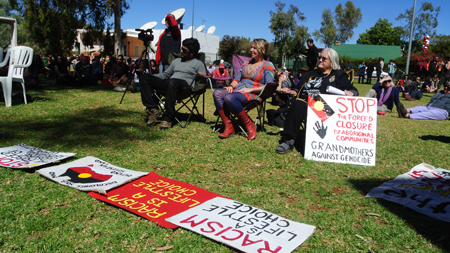 Prime Minister Tony Abbott’s “lifestyle choices” remark has focussed the debate about who should be doing what for Aboriginal people.

Among the many examples defining the current mantra are these two: Last week’s rally in Alice Springs (at right), protesting the proposed de-funding of some outstations in WA, and a media statement by ANTaR about its campaign on Indigenous imprisonment rates – up nearly 90% over the last 10 years.

From those perspectives the concept of self-help rates no mention. The exception is that the governments must be guided by Aborigines about where public money, in increasing quantities, needs to be spent, on most aspects of daily life ranging from food, housing, childcare, transport to education, health and so on.

But ANTaR does not suggest in what way the elders, traditional owners, custodians, law men and women ought to intervene, in their own right, to stem that mayhem, by applying their own much celebrated authority.

A speaker at the rally suggested that Mr Abbott’s remark ought to be seen in the context of allocating government money for car racing facilities, an allusion to NT Budget allocations for drags, dirt kart and speedway racing facilities.

She did not mention that these are not cradle to grave handouts, but subsidies for recreational facilities for people who are – at least in the main –  taxpayers and the commercial backbone of the community.

NEWS: Your release does not state what you think is the reason for the high imprisonment rate. Obviously the Territory doesn’t lock up people for the fun of it.

MEEHAN: The people who are in contact with the legal system are highly likely to have experienced extreme social and economic disadvantage, poor education outcomes, high rate of unemployment, high levels of drug and alcohol abuse and mental illness. To address the root causes of crime is what is needed, preventing crime before it happens.

NEWS: These objectives have been pursued for decades, without notable success. As you point out, crime reflected in the imprisonment rate is going through the roof. There is enormous alcohol abuse, reluctance to work, to take employment, children are not getting the care they need, the truancy rate is huge, domestic violence is rampant. Are these not things people themselves can change, without help from the government? Is it time to discuss self-help as part of the solution?

MEEHAN: If you can’t access support services you can’t apply self-help. Any approach by the government needs to be done in partnership with whichever community they are working with. One size fits all isn’t the approach that is needed. Government needs to sit down with communities, have a look at what the range of services are and what the drivers are of some of the crime.

NEWS: You and I don’t get government help with the way we conduct our lives, look after our families and receive assistance with the issues I have put to you.

MEEHAN: I have not experienced extreme social and economic advantage. I have different life opportunities to other people. Tough on crime approaches across all state and Territories for a decade have not worked. We have seen a 90% increase of crime over the past 10 years, and an increase in the rate of family violence as well. We need to have in place the types of services that go to the root causes of social and economic disadvantage.

NEWS: Is there nothing that the people who are in the justice system, their families, their communities, councils and elders can do to deal with the high rate of crime?

NEWS: In Central Australia we have had for decades a dozen or more NGOs operating in this field, including some very highly funded ones – up to $40m a year. Are they getting it wrong?

MEEHAN: The key is to be working with communities rather than imposing solutions, from the top down.

NEWS: These NGOs are run by members of the community who are on their boards. And the governments are working with them by funding them.

MEEHAN: [In some cases throughout the country] the governments haven’t been engaging with them in real partnerships. That needs to be improved.

NEWS: What needs to be done?

MEEHAN: We need to see a shift away from tough on crime approaches where prison is the answer, to early intervention, prevention and diversion programs, [dealing with] the root causes of offending, identified by the communities, providing the right support services so people don’t offend in the first place.

NEWS: Could it be that it’s not just the governments that are at fault, but also the NGOs which are Aboriginal controlled and some of which are lavishly funded?

MEEHAN: I don’t agree with you that they are lavishly funded. In fact what we saw last year was $500m of cuts to Indigenous Affairs. Community controlled organisations right around the country are kicking goals. We know they are accounting for the bulk of the health improvements towards closing the gap and we know that they provide the right kind of services in the legal space to address both law reform and also to represent clients.

NEWS: In Central Australia there is a broad view that while some government measures are needed, there also must be self-help, by the individuals and their communities. Do you agree with that?