Blockies fight planning bid: Town could be next 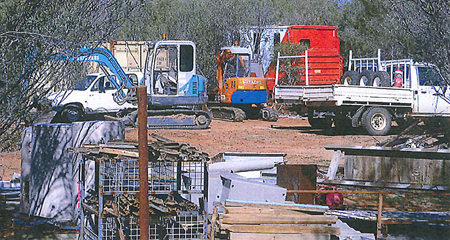 Rural residents have banded together to fight an application seeking to turn a rural residential block into an industrial site, with serious implications for the amenity of the area.

They hope to have support from throughout the town because similar applications could be lodged for anywhere in the municipality, destroying the lifestyle in the neighbourhood, says the group.

It urges people to lodge an objection by this Friday, and have invited anyone to follow details in an advertisement the group has commissioned (there have been 181 page views so far. UPDATE 3.40pm Thursday: The number now is 423.).

The application for the two hectare block in Petrick Road is in conflict of a string of requirements governing home based contracting (HBC), says the group: The applicants are seeking to operate their plumbing business from that site.

The group says if allowed, the use of the land would be violating a clear regulation: The definition of HBC is “the storage on the site of a dwelling of materials and/or vehicles associated with a business operated by a person resident in the dwelling, but which business does not operate from the site of the dwelling”.

The group says it has put this to the Department of Lands but it would not comment and simply invited people to lodge objections.

The group says in addition the application fails to comply with the limits of space used (200 square meters – in town 30); three cars (sometimes 10 are there), loss of amenity to the neighbourhood, destruction of flora and visual pollution.

What’s more, it appears the applicants have been using that block in multiple contravention of rules for four years, with the acquiescence of the department.

Not only do they seem to have exceeded massively the limits, they have engaged in manufacturing, judging by the noise from the block.

Rural Areas Association president Rod Cramer, when asked for comment, pointed to earlier comments he had made.

In September last year he spoke at a public meeting about the misuse of rural residential land for commercial purposes, such as one block whose owner was “running a road train business” from it. [This is currently under examination by the Development Consent Authority (DCA)].

Mr Cramer said people are looking for “confidence and certainty” about their lifestyles when they are buying land.

Answering questions from the Alice Springs News Online, DCA Chairman Denis Burke, a former Chief Minister, said earlier this year: “There are significant issues of non-compliance right across the NT.

“We are trying to deal with them, generally, by trying to get a cooperative response which sometimes takes a lot more time. It’s easy to say, just apply the big stick. That’s not the approach we set out to do.”

Members of the group have made a mail drop in the Heffernan Road and side streets, as well as in Petrick, Chateau and Schaber Roads, but say they hope support will also come from the town area.

PHOTO above is used by the group in its advertisement.

Declaration of interest: The writer is a resident in the neighbourhood of the land in question.