Yirara: Rebellion and failure or meeting a challenge? 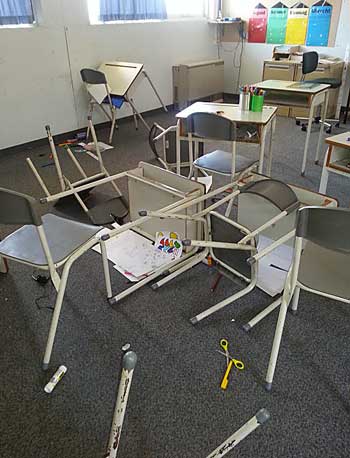 “Banging doors, breaking windows, throwing furniture, ‘f… you’ before they even come through the door. Throwing rocks at doors and classroom windows which are boarded up so the kids can’t attract their friends to come out and keep them company” while lessons are under way.

This account of student behaviour from someone who taught at Yirara College last year is alarming, although the college rejects some of the allegations in this report.

But trouble is only half the story. The other half is that many children arrive at Yirara with a scandalously inadequate primary school education, and socially unprepared for residential secondary education: the boarding school for Aboriginal students is expected to deal with young people in their formative years, many from most difficult backgrounds.

The Alice Springs News Online spoke with two teachers who worked at Yirara last year. Both are experienced professionals.

They make it clear they are keen to trigger a debate about improvements. They spoke to the News on condition of not being named, but after contributing to this report, have offered to meet with Tim Stollznow, chairman of the board of directors of the Lutheran Finke River Mission, which runs the college.

In a nutshell, the teachers say the Yirara students’ primary school education on their communities mostly ranges from very little to not very much.

Most have no idea what awaits them when they travel, sometimes by charter aircraft, to the residential college in Alice Springs, fitted out with a new uniform and some books.

There are some keen, motivated Aboriginal students who are asking for a quality education.

But some have foetal alcohol syndrome.

Many are physically and mentally neglected.

Some are unfamiliar with basic hygiene practices.

Many have never been away from their close-knit families.

Many have no hope of absorbing a mainstream program.

For more than half, English is their second or third language. 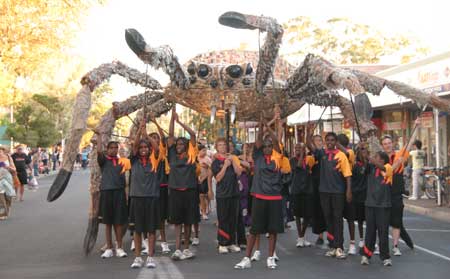 Once they arrive at Yirara they are bundled together into a class to be taught, sometimes, by a young teacher without any specialist knowledge, and no support for dealing with the range of unusual problems.

Mr Stollznow disagrees. He says the kids are “not always” bundled together: “We have different teaching options.”

He says there are multiple teachers per class, at least a teacher and a teacher’s aide.

“We have regular cultural and specialist training and personal development programs. Just last month we welcomed Pat Ansell Dodds from Flinders University for in-service cultural awareness training for all staff, and we have support for dealing with the range of unusual problems.”

According to My School for 2013 Yirara (which also has a campus at Kintore) is a $6m a year operation. Almost all money came from the NT and Federal governments. 2014 was much the same, says Mr Stollznow.

All of Yirara’s students are Aboriginal.

All of them – that’s 100% – are in the bottom quarter of achievement measured by My School.

A simple calculation raises the question of cost-benefit: each of the 140 students why by My School’s calculation were actually attending in 2013 cost the taxpayer $42,000.

The corresponding figure for St Philip’s College, is $17,000. All kids at Yirara are full-time boarders, only some at St Philip’s. “Over half our costs are boarding,” says Mr Stollznow.

Mr Stollznow describes the two teachers’ statements the News is quoting as “inflammatory comments from disgruntled staff members which are terribly exaggerated”.

Both teachers say the children’s massive misconduct not only threatens the physical safety of students and staff, it makes normal teaching all but impossible.

Usually there is only one man (Mr Stollznow says there are more) whom teachers under attack can call for help. Some classrooms have a button to sound an alarm. Other classrooms do not, say our contacts.

There are no serious consequences for misconduct.

“Untrue, we have a comprehensive program to support and discipline students,” says Mr Stollznow.

“Some kids get sent home, stuck in a Troopy, back to the community. It’s not a rare event,” says one of the teachers speaking with the News. 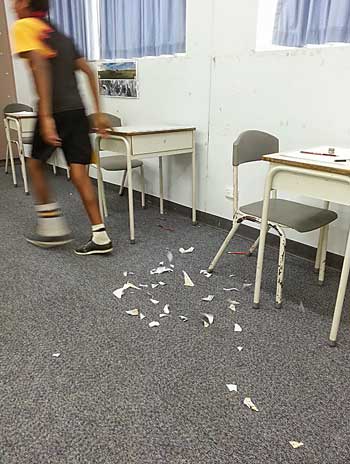 Mr Stollznow explains the low attendance rate at Yirara: “It could be because of men’s [ceremonial] business, sorry camp, excursions.

“Some kids are sent home because they played up, or they are homesick.”

The winding back of secondary education in the bush has clearly been a factor in increased student numbers this year, likely to escalate the problems, say our sources.

Counters Mr Stollznow: “Yirara’s enrollments are up because more families are trusting Yirara to provide a good learning environment for their children.”

“Last year we had 200 kids enrolled and we didn’t manage to keep under control the 50 or 60 who actually turned up,” said the one of the teachers.

“If they all turned up it would be an explosive situation.”

The greater numbers will put further pressure on the staff which is confronting unusual teaching demands for which, generally, they do not have the specialist training.

“They are dealing with a culture they do not understand.”

Mr Stollznow: “We have added 11 staff this year due to increased numbers.”

About half the staff resigned at the end of last year, burn out and disgust high amongst the reasons, say the two teachers: “Several good teachers left. Their skills were not acknowledged.”

Mr Stollznow: “This is simply not true, 10 out of 80 odd staff left, including three who were out of contract.”

Frequently the situation in the classrooms is intolerable: Students will simply not do as they are told, say our sources.

The “f” and “m-f” words are part of the normal discourse: “Every teacher is exposed to this. Admin does nothing about it.”

Several teachers have been physically attacked. One teacher was threatened by a girl student to be hit over the head with a hammer. Throwing chairs, pulling things off shelves are common, say the teachers.

Kids leave classrooms at will, enter other classrooms in search of mates, with whom they are likely to roam the grounds at will or fight running battles, say our sources.

“Obligations to friends are much greater than the learning process.”

Maintenance men are continually fixing locks, lights, graffiti, dumped rubbish. A teacher’s house on the grounds loaned to a family was trashed, made uninhabitable.

“One day 60 kids were running around the complex, fighting and vandalising.”

“You can’t teach when 80% to 90% of the students are running interference.”

Apparently in a bid to maximise revenue the college allows students to arrive well into the term, as kids don’t turn up at the bush airstrips for their trip to Alice and fresh transport needs to be arranged: “Last year there was a continuous intake, until about week seven in the last term of the year.

“That’s crazy. You cannot teach if you do not have a cohort that is the same. You can’t run a program.”

One student’s attitude to the college, where he is fed, entertained and given clean clothing, is typical, says one of the teachers: “I like cinema, football and sports at Yirara. But I hate school.”

Our sources say behaviour management by a student support officer consists of counseling kids who are out of line, relying on “some airy fairy relationship building.

“We must show good will, we’re told. And if that doesn’t work, we need to show more good will.”

The problems, say our sources, mostly start at the bush communities: parents see Yirara as a place where girls can be safe from sexual assaults, and boys can stay out of trouble.

“For others it’s a marriage market. They are here to get a man. They’re just 12 years old, calling out to boys.”

There is clearly some expectation of sexual activity – visits to the opposite gender’s dormitory block, which has rooms with four to six beds – but there is very tight security by the house masters, for whom the students have more respect than the teachers, say our sources. 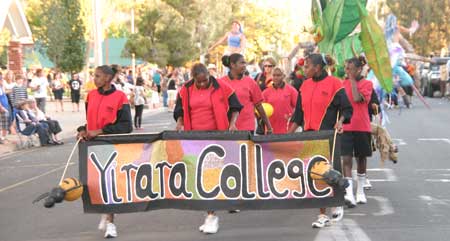 Many parents complain that they are sending good kids to Yirara and get bad kids back.

Some now send their kids to St Philip’s.

“Most kids do not understand what is required from them when they go to school,” says one of the teachers.

“Before we accept them they should be tested in their home communities to see if they are capable of attending.

“Trashing a school can be regarded a cultural obligation out bush. If they are not school-ready there is no point sending them to Yirara. They have no way of connecting to Yirara.

“Their academic English may not be adequate to understand what they are being taught. Their communicative English is not enough.”

“Where are Indigenous support staff?” asks one of the teachers.

Mr Stollznow says it is very difficult to get qualified Aboriginal staff.

“We have an Indigenous advisory council whose chairperson sits on the committee of management,” he says.

That Aboriginal staff have to be formally qualified is a furphy, says one of the teachers.

“How many of the teaching assistants in the bush have formal qualifications? They can be trained on the job. They have more cultural knowledge to draw on than any white person could have.”

There are no special programs such as for the significant number of kids affected by foetal alcohol syndrome, say the teachers.

“We have programs, would love to have more, but cannot get the funds,” says Mr Stollznow.

Say the teachers: “There is enormous cultural resistance to learning English – ‘I don’t want to be white. I don’t acknowledge your language.’

“If they are not teachable, send them home. They are sending us a message, we don’t want to be there.

“What’s the point of having students if you can’t teach them?”

Kids go AWOL: “They head to the town camps, they may make it back home out bush, someone will get them back to their community.

Mr Stollznow says: “We do have students from time to time who misbehave. Kids can get angry and disruptive, we’ve had to send kids home.” 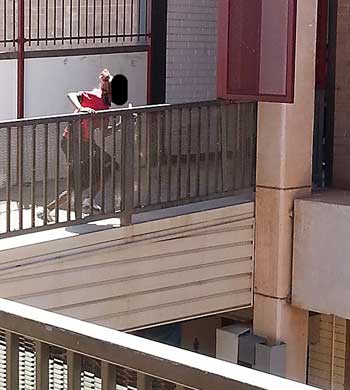 But he claims the two teachers, whose identity the News did not reveal, are “people wanting to make mischief. Much is simply not true.

“There are many good things we are doing.”

The News asked for permission to spend a day at the college, from before breakfast to after dinner, to gather first-hand information, and talk to staff and students. We wanted to be able, within reason, to roam the college at our discretion. Of course we were happy to be in the company of a staff member.

Despite his assurance he had nothing to hide, this was rejected by Mr Stollznow, who is based in Adelaide, saying he wants to show us around when he visits the college next month.

The News declined to take part in a stage-managed tour.

One of the teachers we spoke with said: “There is a lack of direction and purpose. It’s a dangerous work place.

“There is no strategy, we just have to put up with whatever shit those kids dish out, as one of the staff put it.

“What future are we building for them – especially those who are keen to learn. Is this the best we have to offer?”

PHOTOS: The good and the bad: Messages of rebellion, and joining the community in an Alice Festival parade six years ago.

In the year ending September 2020 the tourism industry took a 52% hit, according to Tourism Central Australia CEO Danial Rochefort. Asked whether there had...
Read more
Issue 3