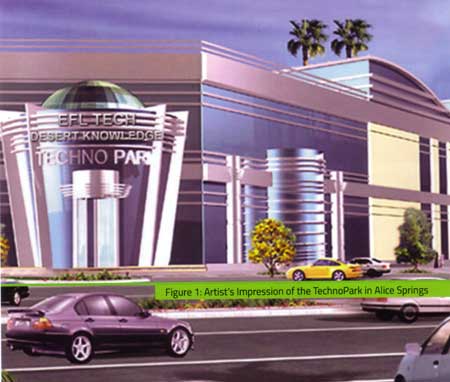 Local entrepreneur Alex Hatzimihail, who is promoting a massive educational and industrial development in the largely defunct Desert Knowledge precinct, says its board is blocking the project despite support for it by Chief Minister Adam Giles.

However, two board members are saying the project has merit but needs to be examined more closely.

Board member Bob Liddle says the project has “a lot of merit. The promoters are taking an entrepreneurial view of it all, and that’s good. It’s a move towards developing the precinct which is otherwise of no use.”

However, Mr Liddle says there are a lot of risks.

He says Mr Hatzimihail is demanding an immediate lease to secure offshore funding – from China, as he understands.

Mr Hatzimihail says the project, if delayed, would “lose the funding for another nine months” as investors from Europe, Asia and North America would allocate the money to other projects.

At this point a letter of intent could be offered, Mr Liddle says, but the final document would need to provide a reasonable return to Desert Knowledge Australia (DKA).

There would need to be secure guarantees for the lease payments – in the order of $20m a year, as a “ballpark figure”.

Also, the precinct’s use would need to be in line with DKA’s objectives.

Mr Hatzimihail says: “The deal we have with the NT Government is that we are investing heavily in the Northern Territory, and we would get the precinct for $5000 per hectare per year, for the 25 hectares, for 140 years.

“That was agreed. They are going back on the deal.

“The blame lies with board Chairman Ken Johnson, and board members Scott Lovett and Neil Ross.

“I was born in Alice Springs. They have already stopped my car company coming into Alice Springs. We were going to build 30 to 50 cars a year. We are not asking the government for money.

“We will take the money to another state in Australia. I am inviting them to go on national TV with me to explain why are they blocking it. We will have one more meeting with Mr Giles to try and break the deadlock.”

Board member Neil Ross says the proposal is so far available only in concept from and is before the board for consideration.

“We are now being asked to sign a lease. We are reluctant to do that, at the moment, because we have not yet had the opportunity of considering the terms of this lease.”

Board member Scott Lovett, who works for Mr Giles, says any comment should come from chairman Ken Johnson.

Mr Johnson is in Melbourne at a meeting and the Alice Springs News Online was told he would contact us later today. We could not reach board member Paul Ah Chee.

Alex Hatzimihail says the project would include a centre of excellence for Aboriginal students, and a learning centre, linked to the Charles Darwin University, for students from the world over.

In his message, which is clearly qualified, he said the briefing “gives me confidence that your business proposal aligns with my Government’s strategic direction.

“I look forward to providing even more in depth support for this exciting project following the informed and detailed business plan finalisation including the financial modelling to deliver on the proposed concepts.”

Mr Hatzimihail says: “Mr Giles has the same vision as us.”