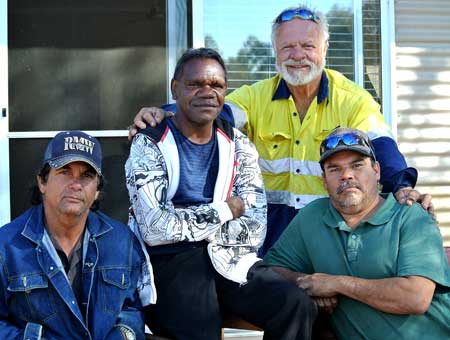 It was Chief Minister Adam Giles, not Aboriginal land holders, who raised the possibility of a nuclear dump near Alice Springs.

This was revealed today by three local Aborigines who say they were invited by Mr Giles to a meeting with him in his office.

Mr Tickner says he received a mobile phone message from Mr Giles, but did not answer it. He says Mr Giles then “got through to my uncle” Mr Bray, who told Mr Tickner who in turn contacted Mr Stevens “because he is a TO”.

They were in the presence of two men they believe were from Canberra, either politicians or senior public servants, perhaps the Federal minister of mines.

Mr Giles, according to the account of the three, raised Mt Everard as a possible site, which is some 30 kms west of the Stuart Highway, on the Yuendumu Road, and near the over-the-horizon antenna.

In a direct line this site is about 45 kms north-west of Alice Springs.

Mr Tickner says Mr Benedict had been there before, some 10 years ago, in company with CLC director David Ross, to discuss a nuclear dump.

Now that the Bray family had “got our land back” Mr Giles asked to meet them “for an information session”.

To discuss the dump was “not our idea,” says Mr Bray.

The men, and about 30 minutes later Sheila Conway, “our elder, one of the main”, received a briefing from Mr Giles and agreed that Mt Everard could be a possible site.

Mr Tickner makes it clear that that none of the others gave any undertakings.

“What the bloke in The Australian wrote – he didn’t quote me properly,” says Mr Tickner. (This is a reference to a report in The Australian on August 16 that it was local Aborigines “pushing” to host a nuclear waste dump.)

“Or me,” says Mr Bray. “Nothing was agreed on” by him, Mr Tickner or Mr Stevens, “apart from old Sheila saying yes, she wanted it.”

Mr Tickner: “Then Bendict told Adam and old Sheila we have to tell everybody else [in the family], too. We said that before we walked out.

“Now all this mob are jumping down our throat saying me and Russell did it. We did not do it.”

Mr Bray says as a “test” Mr McKenzie asked Mr Giles for a couple of million dollars before we “went to the negotiating table and went on a trip to Sydney Lucas Heights.

“And Mr Giles said, no, you’ll shoot yourself in the foot. And I said, what about the millions you people are getting for taking all this rubbish that’s coming into Australia.”

In what context was Lajamanu raised?

Mr Bray: “Giles brought up Everard. We then said, there is another place, too, isn’t there, Yuendumu? This is what I heard on the grapevine.

A spokesperson for Mr Giles provided the following statement this morning: “The Chief Minister asked me to let you know that your story is incorrect. He has said many times that a number of traditional owner groups and individuals have contacted him to ask how they can nominate for nuclear waste facility and the government has given them advice on how the Commonwealth nomination process works.

“A  nuclear waste facility in the Northern Territory presents an economic opportunity for land owners who are interested. Ultimately this is an issue for Traditional Owners to negotiate with the Federal Government.”