Above: Visitors from the Cape York Aboriginal Australian Academy give a presentation to teaching staff at Ntaria School.

“I’m going to teach you two words from my language.”

Cheryl Cannon has been in the classroom for just a few minutes. Her clear ringing voice and warm but assertive presence commands attention. The children quickly gather on the mat in front of her.

She holds up a large book and points to the words, then reads them aloud, “Nghadu gadil Cheryl,” pointing to herself.

The children have trouble waiting for the signal – hand to the ear – but what they don’t have trouble with is pronouncing the words from a language they are hearing for the very first time: “Nghadu gadil Cheryl!” they cry out.

But Ms Cannon insists they wait for the signal. “We’ll get this right,” she says and repeats the routine several times. Soon they are getting the hang of it, having learned the words as well as the discipline of watching and waiting for their turn. 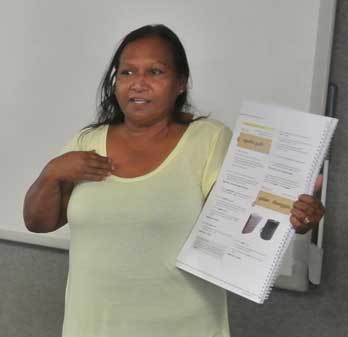 “Does this sound like your language?” asks Ms Cannon.

The language is Guugu Yimidhirr, Ms Cannon’s mother tongue. She comes from Hope Vale in Cape York, far north Queensland and is a former school principal with the Cape York Aboriginal Australian Academy (CYAAA), part of the welfare reform drive led by Noel Pearson on the Cape. She has retired now but remains a firm friend of the project.

This brief demonstration of Direct Instruction applied to teaching an Australian Indigenous language took place on Tuesday in a classroom at Ntaria School in Hermannsburg, 130 kilometres west of Alice Springs. Ms Cannon, together with Bernadine Denigan, CEO of the academy, and Don Anderson, Executive Principal of the Cairns-based Good to Great Schools Australia, have been in The Centre as guests of the Member for Namatjira, Alison Anderson.

Ms Anderson is impatient to turn the tide of schooling failure for children in her electorate. Not content to wait for the outcome of her government’s review of Indigenous education (final report due in April) she is seeking to build a relationship between the ambitious CYAAA and the primary schools in Titjikala and Ntaria (Hermannsburg) and the secondary college at Yirara, run by the Lutheran Church’s Finke River Mission. Although the two primary schools are in the public system, Ms Anderson sees all three as linked by their Lutheran traditions, also strongly present in Cape York’s Hope Vale, hometown to Ms Cannon and Mr Pearson.

This week’s visit by the Cape Yorkers has been a toe in the water. In the near future Ms Anderson hopes to take a delegation of community members and education professionals from her electorate across to Cape York, and Ms Denigan says that Mr Pearson himself will follow up with a visit to The Centre.

What could come out of this? Ms Anderson sees a solid grounding in English literacy and numeracy as the core of what any school has to deliver and is impressed by the early gains apparently being made by students at CYAAA. She also loves the fact that the academy is not satisfied to rest on its laurels. Its program has moved the three schools at Coen, Aurukun and Hope Vale from “poor to fair”; now they want to get “from fair to good” and the ultimate aim is to go from “good to great”. 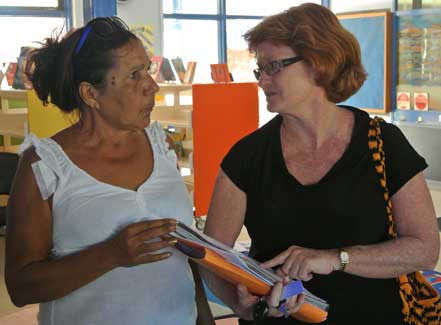 But, deeply attached to her own culture and languages (she speaks four as well as English), Ms Anderson is also inspired by the place CYAAA gives in its highly structured program to Indigenous languages and culture as well as a range of other experiences usually known as “extra-curricular activities”. In the words of Noel Pearson, this is to provide the students with “the best of both worlds” so they can “orbit” in and out of both as necessary or desired.

At Ntaria after school finishes, Ms Denigan explains to teaching staff the “three Cs” of the academy’s approach: “class”, focussed on Direct Instruction (DI) in English literacy and numeracy, dominates the morning’s program, when children’s learning potential is at its peak, but there is also time in there for “culture”, specifically a lesson in their Indigenous language, using the DI method.

During the rest of the school’s extended day – from 8.30am to 4pm – there’s more time for “culture” and also “club”, which includes music, art and physical activity. Club’s aim is to expose students to a rich range of contemporary experiences. By way of example, Ms Denigan shows a short film of the combined brass bands from the three CYAAA campuses playing at a music festival with well-known Australian jazz musician James Morrison, conducted by his brother John. It’s delightfully impressive.

There’s a fourth C too, “community” which takes in the school’s relationship with the students’ parents and wider community, dealing with such issues as attendance and children’s health through a student case management approach.

At the heart of the academy, providing its coherence, is DI. It is a teaching approach whose basic tenet is that “if the student hasn’t learnt, the teacher hasn’t taught”. It uses a highly developed prescriptive curriculum and textbooks. Information is broken down into small learning increments that are introduced systematically. There is constant revision. As Ms Cannon puts it, “10% new, 90% revision”.

There is also constant monitoring and testing, with data analysed each week by an external consultant, then fed back to teachers who examine it in conference. Under these conditions it is simply not possible for a student to “fall through the cracks”, says Mr Anderson. On the contrary, all students learn “to mastery”, even if some get there more quickly than others.

Teachers are intensively trained in the method with follow-up coaching and monitoring. The “scripted curriculum” is particularly beneficial for schools with high teacher turnovers as it provides for continuity. 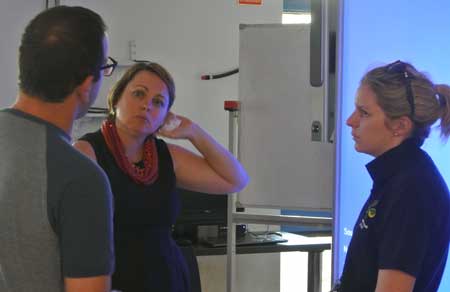 The teacher ratio is the same as in any Queensland education department classroom. The three CYAAA schools are all in the public system under a special agreement and are funded by the department and the federal DEEWR. The role of properly trained teacher aides is important and there are usually one if not two in the CYAAA classrooms.

The results data are looking promising, though education experts (the Australian Council for Education research evaluation, commissioned by the department) say that the quantitative data, such as NAPLAN results, don’t yet allow a conclusion to be drawn.

Club and culture programs are non-compulsory but enrolment in both is approaching 100%.

Aurukun campus is the most comparable to remote central Australian schools such as Titjikala and Ntaria where students grow up speaking their Indigenous Australian language and start school with little or no English. The academy is “pleased” with the improvements on this campus, with more students achieving the national benchmarks in 2013 than in 2012. The largest increase was in the reading test area, but there were students achieving national minimum standards in all 15 test areas. 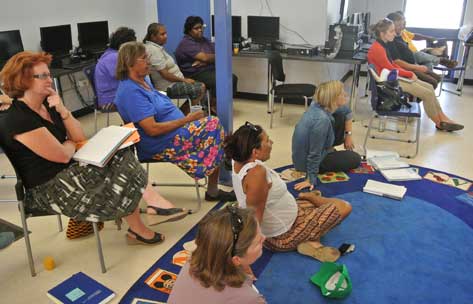 Left: Alison Anderson on the mat during the presentation at Ntaria by the Cape visitors.

At Hope Vale it was at nearly 90% at the start of 2011 but has fallen away since and strategies are being designed to address this. Coen meanwhile regularly achieves over 90% and was doing so even before the academy started in 2010.

Behind these percentages, says Ms Denigan, are individual students whose attendance is at 100% and who are going ahead in leaps and bounds. The aim is to get everyone else there. 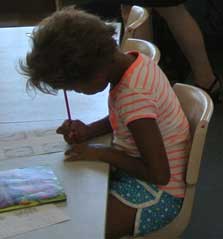 The numbers, without comprehensive analysis, only go so far as does any flying visit or snapshot. It’s the ‘qualitative assessment’ by the Cape Yorkers that is infectious – rejecting all the old excuses and full of excitement and optimism that the highest goals that they are setting are achievable and that they have something to offer other schools.

In the staffroom at Ntaria there is some scepticism, fed by ‘new program’ fatigue. But as Don Anderson points out, DI is not new: originating in America, it’s been around for almost 50 years and many hundreds of studies have shown that it delivers significant and sustained gains in student outcomes. CYAAA’s innovation has been to adopt it for an Australian context, and a remote Indigenous Australian context more particularly.

At this time of review and refocus for Indigenous education in the Territory, Alison Anderson is convinced that we have lessons to learn from the Cape.  And, she says, there’s no time to lose: “I don’t want to see another two generations of my people failing at school.”