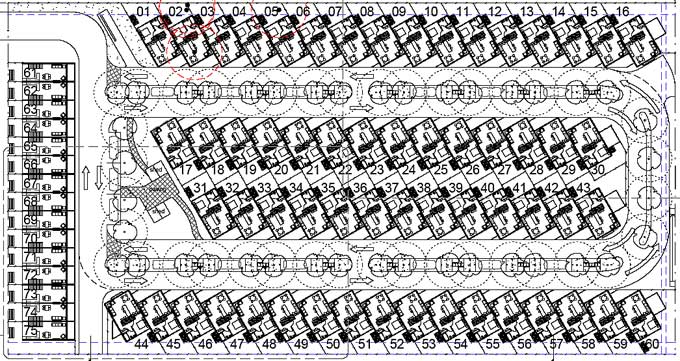 No public submissions have been received by the Development Consent Authority (DAC), neither for nor against this project, by end of the display period last Friday.

The application will now be considered by the DCA on Wednesday, April 16 [please note change of date]. The public session should commence at 9:45 am, at the Double Tree by Hilton.

People will be able to address the DCA from the gallery. However, formal objections to the DCA’s decisions can be made only by people who have made a submission – and there are none.

However, the developer – the applicant – is entitled to object to any decision of the DCA or to conditions it imposes. The Alice Springs News Online has received six comments since posting the story on Saturday morning.

A developer wants to squeeze 60 two-bedroom and 15 one-bedroom units into the 11,034 square metre site of the old bowling club, between Gap Road and South Terrace.

The land was recently bought by Asbuild NT Pty Ltd and architects Susan Dugdale and Associates provided a development application which was open for public comment until yesterday.

The project is in conflict with several requirements of the town plan and would need to be granted variations.
It could not be further from Central Australia’s fame for wide open spaces but hype in the “statement of effect” seeks to counter that.

“Wide landscaped internal roads are a feature of the design, these will be shady avenues of trees when the planting has grown,” says the application.

The project “contributes to a range of housing options, providing one and two-bedroom units in the ‘affordable’ price range”.

A variation is being requested to increase the density from one dwelling per 200 square metres to one dwelling per 147 square meters. In support of this it is stated the proposed dwellings “have a smaller footprint and less [sic] residents per unit than larger units with more bedrooms.

“The units are aimed at the ‘affordable’ end of the market, and the proposed number of dwellings will increase the site yield, bringing down the rental or purchase cost of individual units. This will be of general benefit to the Alice Springs community.”

The setbacks stipulated in the town plan would require setbacks between 8.5 and 10.5 metres but the developers are asking for three meters and two metres for some balconies throughout.

The applicants concede that private open spaces “do not meet the minimum requirements of the Town Plan.

“A variation is sought to have reduced areas of private open space as … the yards provided are well sized and placed as service yards for washing lines, bicycles, garden sheds, and trees for shading and screening the units … the units are one and two bedroom and so are less likely to be occupied by families with children … there is a large amount of high quality open space in the neighborhood, including the Todd River corridor adjacent.

“There is a precedent for approving multiple dwelling developments with minimal or no private open space [the application does not say where], and these meet the needs of a sector of the housing market.”

The Town Plan requires 15% of communal open space but the proposal provides only 2.5% – but that’s OK, asserts the application, again suggesting the residents can go for a walk in the Todd: “There is a large amount of open space in the neighborhood, particularly the Todd River corridor across the road on the South Terrace boundary.”

Again the application evokes images the grand boulevards of Europe: “The amenity of the development is greatly enhanced by landscaping at the entry area, and wide internal roads with avenues of trees which encourage walking, and will provide a pleasant outlook from all units when the trees have gained some growth.

“The recreational area provided is very well located in the centre of the development, is protected with a high degree of passive surveillance, and will be developed with 2 shade and BBQ areas for use by residents.”

“A multiple dwelling development with minimal communal open space will still meet the needs of a sector of the housing market.” That sector, it seems, is the fly-in, fly-out workforce.

Public safety would be enhanced through “increasing casual surveillance of South Terrace and Gap Road by adding more residents to the area, generating activity and more vehicle movements.

“A number of the two-bedroom units overlook South Terrace, also contributing to passive surveillance of this area.

“The proposed internal roads are wide, landscaped mixed-use spaces that combine the functions of vehicle and pedestrian access, bin stores, and visitor parking, so will generate a lot of activity. The balconies of all units overlook the internal roads, contributing to the liveliness of the public spaces.”

It sounds like living in the Bowling Green will be a bundle of fun!