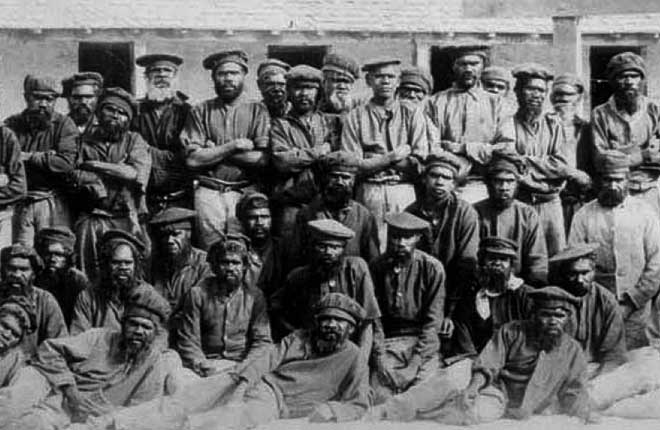 Above: Aboriginal prisoners on Rottnest Island in 1893. State Library of Western Australia.

Pilger uses the photo in his film. It also features in the Australian History Curriculum for Year 10 students produced by Fremantle Prison.

Tomorrow is a day of remembering. It is the anniversary date of the 2008 apology by Prime Minister Kevin Rudd to the Stolen Generations. Marking the occasion in Alice Springs is another screening of John Pilger’s Utopia (on the Town Council Lawns at 7pm). The organisers no doubt believe that the film is a model document of remembering, but brief examination of a section that is specifically about remembering history shows just how misleading Pilger’s approach to this important process can be.

This is the section where he visits Rottnest Island, off the coast of Western Australia, once a prison for Aborigines, now a tourist destination. It obviously has a big emotional impact for many viewers. There were gasps and murmurs during the screening at Araluen. Prominent local Aboriginal man Harold Furber was reported by the ABC as having been most struck by this “mind blowing” sequence. The NT Greens’ Marlene Hodder, who organized the screening at Araluen on January 25, commented in Eureka on February 6 that, “Even I (who have worked with Aboriginal people since 1969) was outraged to … learn about Rottnest Island. Aboriginal people are welcoming the film and think it should be seen widely by as many people as possible. They are pleased that at last some of the true stories of this land are being told.”

But what is the story Pilger tells of Rottnest and how “true” is it?

We actually do not get many facts. We get none that are detached from Pilger’s polemical treatment and at times he blatantly distorts and misrepresents the situation.

He leads into his visit to the island with 1960s footage promoting Perth as “a suburban utopia” and contends that Perth’s development depended on “air-brushing out an entire human community”.  Rottnest will be his example, standing in for the whole of Western Australia, which remains “a state of imprisonment for black Australians”, as he concludes at the end of the sequence. 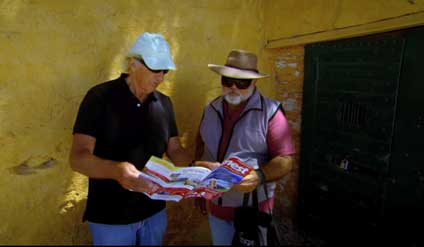 He arrives on Rottnest in the company of two members of the “Indigenous Nyoongar nation”, Marian McKay and Noel Nannup. Pilger’s voiceover tells us that the island was from 1838 “a brutal prison” and says it  “ought to be as notorious as Robben Island in South Africa”.

And why isn’t it? Pilger would have us – and the world – believe that this is because the island’s history is being covered up.

His Nyoongar companions “know the truth about this island”. On the beach before they head into the settlement with him, Noel Nannup performs a ceremony “meant to protect us all” from the awaiting sense of “horror and injustice” that will be found at “one of the British Empire’s most isolated concentration camps, part of a genocidal history that’s barely recognised in white Australia”.

By way of proof Pilger produces a brochure (scene from the film, above) that he picked up on the ferry on the way over. He contends, leading Noel Nannup to agree, that it makes no mention of the island’s past, not even “a sanitised version of the concentration camp that was here”. “There isn’t anything,” he says, and reading from the brochure, goes on: “Historic Rottnest, here it is, ‘Play and stay’.”

I have not seen the brochure but I have been onto the island’s official website, rottnestisland.com, the one where visitors would go to book their accommodation, to find out what they could do and see. Quite true that the island as a whole is presented as a place of pleasure, but nonetheless right there, on the home page, is the heading ‘History and Culture’. Click on it and it takes you to a historical overview presented under nine headings. These include ‘Aboriginal History’ and ‘Penal settlement’. The entries are not encyclopaedic but they contain a whole lot more information than Pilger gives us, which directly contradicts his claims of a cover-up.

Under the Aboriginal history heading, among other things, we learn that there are “17 sites on Rottnest Island listed under the Aboriginal Heritage Act 1972-1980” and that  “this Act makes it an offence to alter an Aboriginal site in any way without written permission from the Minister for Aboriginal Affairs”.

Under the penal settlement heading, the numbers of prisoners is given as “some 3,700 Aboriginal men and boys”. Pilger prefers loose numbers, saying simply “thousands”. In another online source (a curriculum document I refer to below) I find an estimate of between 3700 and 6000.

The tourism site states that 369 prisoners are reported to have died on the island between 1838 and 1931: “While most deaths were caused by disease, it is reported that five prisoners were hanged.” Pilger has “many of them tortured and killed”, but he doesn’t substantiate this  claim.

He relies rather on the sense of revulsion viewers will get when hearing this stark statement in contrast with his footage of “a hotel with a luxury spa”, and then goes to his interview with Noel Nannup.  This he sets up with the comment: “Australia must be the only country that makes a tourist hotel out of a place of carnage”, getting Nannup to agree with him. 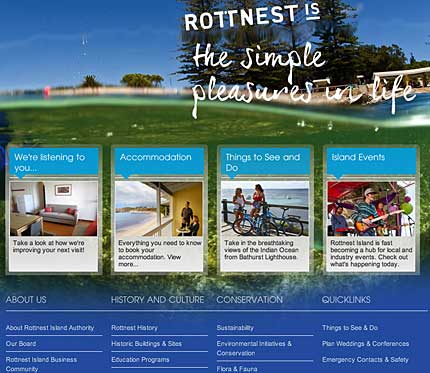 The hotel where he films the interview has been converted from the Rottnest prison “known as The Quod”. Nannup describes something of the conditions of the prison, the airless cells – only “one vent above the door” – and the overcrowding, which he puts this way:  “Seventeen people died in each cell” and “In this [room] fifty-one people have died”.

The impression these comments make, after Pilger has established the right atmosphere for their reception, is that incarceration at Rottnest was a one-way journey to certain death. This is what many viewers take from the film, even those who should know better. One of them is Marcus Waters, a lecturer from Griffith University, who wrote a review of  Utopia for The Conversation, a comment site that bills itself as having “academic rigour, journalistic flair”. Waters writes with regard to the Rottnest sequence: “Filming occurs in a former prison cell where 51 people were held before their execution.”

Another reviewer making the same assumption is The Guardian’s John Crace (following the British release of the film just before Christmas last year). He writes in almost identical terms: “ I hope the guests sleep well in the $200-a-night room in which 51 Indigenous Australians were held before their execution.”

I won’t rely on the tourism site to counteract this information. You would never know it from Pilger’s Utopia, but serious research into our colonial history is produced in Australia, including into the penal experience on Rottnest Island. The prison and its prisoners are the focus, for example, of a comprehensive historical review in Far from home, Aboriginal prisoners of Rottnest Island 1838-1931 by Neville Green and Susan Moon. This is found in the Dictionary of Western Australians, Volume X published as “a bicentennial project co-sponsored by Challenge Bank Ltd (formerly the Perth Building Society) and the Australian Bicentennial Authority”.

I have not been able to access that publication for this article but I have been able to sight the relevant pages of Brian Purdue’s Legal Executions in Western Australia (Victoria Park, W.A: Foundation Press, 1993). This widely cited research puts hangings on Rottnest at five. It is no doubt the source for the same figure given in the Australian History Curriculum, produced by Fremantle Prison for Year 10 students.

It summarises: “Of the 154 people legally executed in Western Australia, 61 were Aboriginal, 23 were Asians and 70 were of European descent. 5 Aboriginal men were executed on Rottnest Island. No Aboriginal prisoners were executed at Fremantle Prison.

“In 1888 the Gallows were constructed at Fremantle Prison and from this time the majority of state executions were carried out on this site. However, between 1886 and 1900, 12 Aboriginal men were executed, all in the regions, including one at Rottnest Island. During this same period, 11 non‐Aboriginal prisoners were hanged at Fremantle Prison.”

The subtitle of the curriculum is “The Modern World and Australia – Rights and Freedoms”. It warns that its subject matter “includes deeply emotive subjects such as crime, punishment, death, as well as racial discrimination against Aboriginal people. The document includes information about Aboriginal people in prison and discussion of deaths in custody. This information, while on the public record, may be distressing to the families of those people involved. Please use this information sensitively and with respect for the Aboriginal families and others involved.”

The curriculum suggests “depth studies” including student investigations of “the experiences of Aboriginal prisoners at Fremantle Prison against the backdrop of race relations in the wider community”. It asks students to consider these questions: “Should British laws have been applicable to Aboriginal people? Were Rottnest Island and Fremantle Prison, with their associated methods of incarceration, punishment and reform, appropriate places to send Aboriginal prisoners?”

Australia covering up its history?

No doubt our conversation about the past – including its brutalities, injustices, racist actions and policies – could be improved and there is particular opportunity for this with the national debate leading up to the referendum on constitutional recognition of Australia’s Indigenous people. Thoughtful, serious research has and is being undertaken in the area, and as we can see with the Fremantle Prison curriculum document, it is not restricted to academia. This work forms a much better basis for conversations about our history than the distortions of John Pilger’s film.

Postscript: On film, a much better place to start a conversation about our past is the beautifully produced, well researched, often confronting yet also nuanced First Australians, produced by Rachel Perkins for Blackfella Fims, SBS and Screen Ausralia. It seems to be permanently available to watch online.