Who's going to drive Aboriginal resurrection?

This is the background for a theme we’ll be pursuing through the summer. Be part of it. We’re starting with Senator Nigel Scullion (pictured), responsible for Aboriginal affairs, unquestionably the most important Minister of the new Abbott government so far as the Northern Territory is concerned.

Estimated government expenditure in 2012 per head of population was $44,128 for Indigenous Australians, compared with $19,589 for other Australians, a ratio of 2.25 to 1, according to the Productivity Commission.

In school education the ratio was nearly three to one, and in public and community health services, as well as housing, almost five to one.

Based on these figures, the burden placed on the public purse by Indigenous Australians in the Northern Territory is 10 times greater than elsewhere in Australia: They make up about 3% of the national population and about 30% of the Territory’s.

This situation has been allowed to go on for decades although Indigenous people, as a result of land rights, have enormous assets: their labour, currently disproportionately idle, and half the Territory’s landmass, much of it arable and with good known water resources. It is most likely more water can be discovered.

Furthermore, substantial funds are flowing to Aboriginal people from mining, pursuant to statutory royalties not available to non-Indigenoue people.

For example, the Granites Mine Affected Area Aboriginal Corporation had accumulated funds of $26.8m in the year ended June 30, 2012, and had a total income for that year of $3.3m.

Do you think it is reasonable to expect that Indigenous people use money such as this, and mobilise their assets, to become more self reliant?

If so, what are the steps that would need to be taken for this to occur, and by whom?

It’s a classic Catch-22 bind: communal ownership of land created under the Land Rights Act nearly 40 years ago has been a disaster for Aboriginal people.

Yet the government can’t convert that land – for example – to individual freehold unless the communal owners want it to be. And there is no sign they do.

“Who would we give the land to?” asks NT Senator Nigel Scullion, without doubt one of the best informed Australian politicians in questions of Indigenous affairs, and now the Minister for them in the Abbott Government.

“You wouldn’t want me to tell you what to do with your land, would you? If you own a couple of acres, would I have the right to tell you, go and grow veggies and improve your asset base?

“It’s their land. We can’t be interventionist.”

As there is no call for change from the people owning half the Territory’s landmass, they appear to be sealing their own miserable fate of alcohol mayhem and poverty, shutting themselves off from a more self-sufficient way of life.

Sen Scullion says there are aspects of the current Act which offer significant opportunities.

However, the bottom line continues to be that change can only flow from initiatives of these communal owners, and their land councils, which Sen Scullion says should do much more to develop commercial enterprises: “They need to get on with business, go beyond just collecting land, and loosen the reins” with respect to the use of Aboriginal land.

“It’s been an intractable issue for a long time.”

What are the land councils likely to say to him? “Probably to mind my own business,” says Sen Scullion.

In any case, the Abbott Government has undertaken not to change the Act, at least not in its first term.

And so the government’s hands remain tied as a supplier of passive welfare until the recipients are good and ready to put their assets – including their own labour – to work.

Sen Scullion says there is some interest in township leases, and in the new government’s first 50 days, arrangements have alre 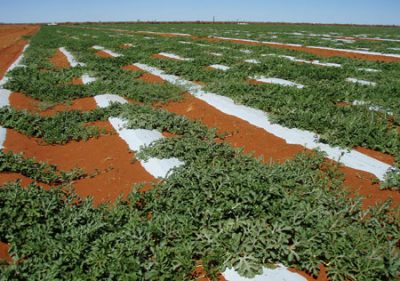 ady been put in place in the Top End towns of Yirrkala and Gunbalunya.

These “Section 19” leases can be taken out for up to 99 years and as such overcome, to a degree, the obstacle of inalienable land (which can’t be sold) being useless as loan collateral.

What’s more the leases can be applied to large tracts of land for a variety of uses, from hunting to broad scale agriculture.

Yet Sen Scullion says Aboriginal land can’t be regarded as an asset that would disqualify a welfare recipient: “It’s not individually owned. Communal ownership cannot be tested in the same way. These assets cannot be liquidated.”

The sparse occasions where enterprises have started on Aboriginal land are not encouraging.

For example, people are “disconnected” from the watermelon farm at Ali Curung (pictured) because it is seven kilometers outside the community, says Sen Scullion. The workers are largely itinerants or backpackers.

We pointed out to him that Ali Curung people traveled hundreds of kilometers just to get grog on a day that ended in the death of a woman.

Sen Scullion says “we don’t have unconditional welfare” but it’s clear that individually distributed mining royalties can, should be but are not adequately subjected to asset tests, and so ought to be income from art.

But the millions in the royalty associations bank accounts – well, they are communal property.

Other options, under the Act as it stands, are forming new land councils.

There is a misconception about dole bludging. Sen Scullion says many people “survive by begging, borrowing, depending on the family system, making their way in the world with humbugging”.