Again: Skater fined for not showing ID – after doing so 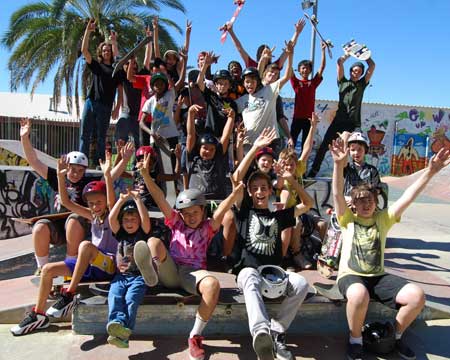 Another skateboarder, Storm Vincent, has been fined $576 by town council rangers for not showing ID and in addition, $144 for skateboarding in the CBD.

Both he and Marco Formoso received the fine after producing ID, as it is claimed assertively by Marco and – on behalf of Storm – by Matty Day, a seasoned youth worker and the manager of the local hub of Skateboarding Australia.

And Matty says Storm received the second fine although he had not been skating in the Mall.

He says rangers had been “baiting” him. Both Marco and Storm had tried to work things out with the rangers, stopping to discuss the issues, not running off, but to no avail, says Matty.

“They were getting attitude from the rangers. Fines are futile. They lead to resentment.”

The issue is receiving keen public attention, as shown by 18 readers’ comments (so far show) published in the Alice Springs News Online. However, the town council is dealing with the matter behind closed doors.

CEO Rex Mooney told us in response to a request for comment: “As due process has been followed it is not appropriate to make comment on this issue.”

Matty says it is time for community leaders to become involved in a meaningful way. The skaters have formed a group known as Citizens for Youth Inclusive Space in Alice Springs. It already has more than 120 Likes on Facebook.

“I don’t support a law that gives a ranger a reason to approach and question someone who is riding around town and hasn’t caused injury or property damage,” says Matty.

“I have spoken to both Storm and Marco and it is obvious that they have been punished for talking back to the rangers.

“It’s just a simple matter of respect both ways, both skateboarders have queried the manner of the rangers and both of them produced ID when they felt safe to do so.

“We hope that skateboarders and rangers can see the benefits of working together in the CBD to reduce real crime – more eyes on the street.”

Matty says the skatepark is too small, crowded with skaters, BMX riders and scooters; it is at the edge of the CBD, has no toilet, and the landscaping is unfinished. And the new government has obviously dropped plans for a skate ramp at the Anzac Oval youth hub.

Matty says early consultation about the Mall refurbishment had given young people the impression they would be welcome there, part of the boost to the economy for businesses like the cinema, Murray Neck Music, Desert Wave, and Plaza food outlets.

“A street needs street culture and skateboarding is a big part of that,” says Matty. “We need a space where young people can be young people. We need an adjustment to by-laws to fix this once and for all.”

Matty is also the manager of the Central Australian School of Skateboarding which delivers teaching workshops, private lessons and events, and he is planning to open a specialist skateboard store in Todd Mall.

“I’m concerned that all the negative press and confusion about skateboarders will effect my business. I have had a lot of parents express concern and surprise about the conflict with local authorities,” Matty says.

“Skateboarding is a mainstream sport in Australia and the USA. It is strange that  such fear exists in our small community, I don’t know where it comes from. We’re turning good kids into criminals at the moment. It needs to end.”