OMG, they shrank the Ghan! 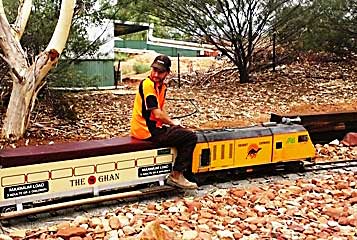 The latest Great Railway Journey in Alice Springs you take not in a train, but on a train.

And the distance is not measured in kilometers but meters – 500 of them so far.

It’s the latest feature of the ever expanding National Road Transport Hall of Fame. 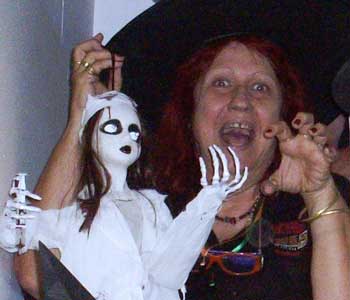 And true to form, CEO Liz Martin is never short of ideas about how to make it happen.

This venture benefits from persons currently accommodated at Her Majesty’s pleasure, as well as some whose community work isn’t entirely voluntary.

Plus, of course, there are the usual volunteers.

Correctional Services also provided a dollar for dollar grant, used in part for rolling stock, making it a $50,000 project so far, with stage two of a further 500 meters under negotiation. It will ultimately become a people mover throughout the huge precinct.

“As well as offering train rides daily between 10am and 4pm the train is available for birthday and other parties.

“The Halloween Ghost Train is the first of a series of themed mini-trains that will feature monthly from now on. The next three are Christmas, Australia Day and Valentines Day.” 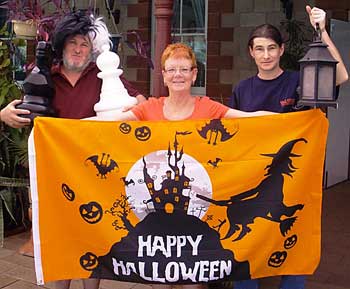 Ms Martin says the museum “is proudly self funded and we see the miniature rail as an important part of ensuring its sustainability and the long term viability for the Old Ghan Museum.

“A giant garden chess set has also recently been added to the lawns.”

Facebook
Twitter
Pinterest
WhatsApp
Previous articleAgain: Skater fined for not showing ID – after doing so
Next articleNative title enterprise: Light at the end of the tunnel