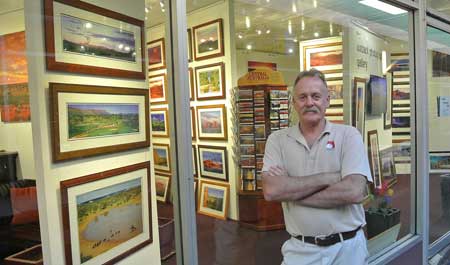 The words “leaving town” raise the specter of that ultimate protest about all that’s wrong with Alice Springs, that final act of disapproval, triggered by one too many barking dogs at night, one too may drunks in the street – or in the case of Steve Strike, one too many government promises cynically broken.

Steve is a product of the boundless opportunities of Alice Springs – yes, a long time ago now, when there was nothing you couldn’t do.

He came to Alice employed as an Aboriginal Training Officer for the Department of Aboriginal Affairs when, some three decades ago, he saw the potential to become a successful photographer.

As you could if you had the guts and vision in the Territory of those days, he proceeded to earn himself the nickname “Scoop”, freelanced for a string of national and international publications, shot pictures of The Centre’s glorious nature that found an enthusiastic market.

He became a local “fixer” in demand by media organisations the world over, covering that romantic, fascinating patch that is The Red Centre. He branched into location management, scouting, logistics for mining and media companies.

“I have the keys to lots of gates,” says Steve. It’s an asset few can match, on the ground knowledge accumulated over decades that the town and the region will now need to get much less of.

Coincidentally Steve became a one man promotion machine for The Centre.

Fast forward to today: Steve was chief consultant and partner with a Territory advertising agency who spent nearly $300,000 to pitch for work with Tourism NT (2013-14 budget $54.2m), producing images and videos for tourism advertising and TV commercials, a multi million dollar gig.

They were naively believing the propaganda that Territory businesses will not only to be considered in Territory government purchasing, but given a slight advantage.

Steve says the work went to an interstate company and now he is packing up.

His office for 24 years is already empty. It is in a CBD shopping arcade that has the shutters down too often. Steve will – for the time being – keep the gallery next-door, but open only by appointment.

He will focus his interests on Darwin and China where he has a small office providing services for rich tourists wanting to enjoy The Centre.

In 1985 he bought out Les Taylor’s Action Photography in Gregory Terrace. His children Lia, 24, and Ben, 18, both “Alice born and bred” weren’t even born yet.

Both could have tourism related jobs here, however Lia has been working in the snowfields and living overseas. Ben has just a few weeks left at St Philips College. Are they likely to come back or stay?

“Tourism in Alice Springs is stuffed,” says Steve. There is no adventure tourism any more or it has scaled back dramatically.

Balloonist John Sanby has sold out. Nick Smail’s camel operation has gone. Where are the Brennans and Taylormade Tours, the Harley rides? The helicopter tours?

The industry, once thriving on the gut feeling of local owner-operators, is now largely owned by interstate or overseas corporations and managed by staff on limited stints who, unsurprisingly, do not have the passion and local knowledge of the pioneers.

Steve knew them all: For decades it was a full time job shooting images for their brochures. It’s nearly 10 years since Steve has shot a tourism brochure in Alice Springs.

Steve says science – much of it dubious – and bureaucracy have turned “the product” from adventurous, sometimes daring, often impromptu, matey outback fun into something bland, boring and predictable: “Dumbed-down, air-conditioned gloss.”

The tourism industry right now is a disaster. “Many Alice Springs motels have been converted into apartments, some are carried by their chains not because they are making money but for the prestige: It looks good having something in the middle of the country.” And it serves the loyalty programs.

Compared to the lavish standards set by the Asian accommodation industry, their much lower costs yet incomparably better service, the offering in Australia generally is poor and, consequently, doomed unless it lifts its game – a lot, says Steve.

The Rock resort is mostly run by “ring-ins” from interstate. Steve says the much touted highlight of a (massively priced) dinner on a sand dune of the Longitude 131 “tent” complex was the cultural talk by an Aboriginal elder. Pointing at the monolith in moonlight he use the word “Loolooloo” several times.

Steve asked him what he was talking about: “You know that rock is called Uluru, don’t you?”

Steve says he took a room in the Ayers Rock Resort in June, costing $389 night. The bin still had garbage in it, the lampshade was on floor. The shower head was held together with gaffer tape.

His clients from China, a film crew, were shaking their heads. “You can get a 7 star hotel China for half the price,” says Steve.

He says the Alice art galleries are not making money from passing tourists, but from wholesaling to art galleries interstate and overseas.

Having a slick gallery is useful for being distinguished from a carpetbagger operating from a shed, he says, just in case a wholesaler happens to pop into town.

But it’s window-dressing, and an expense likely to become unnecessary. What will happen to the Mall then?

The town needs to take a history lesson from the vision of the NT’s first Chief  Minister, Paul Everingham.

He set a high benchmark, building five star hotels in Alice Springs and Darwin and the “global icon” Ayers Rock Resort “from scratch”.

Says Steve: “Everingham didn’t need a set of statistics, or reports from 1000 consultants. He had a gut feeling and he went for it.”

True, the resort was losing money while it was run by the government bureaucracy, but it got into the black the moment private enterprise took over.

Most importantly, the flow-on was a string of four and three star hotels: “There was confidence. People went nuts getting into the industry.”

In the 1980s The Alice had some 30 hotels. And the owners were wearing out shoe leather hawking their wares door to travel agents’ doors in Europe, Japan and the USA.

Many of these motels and hotels are now converted to flats or housing complexes – lost to the industry.

“The Territory image was raw, rugged, wild, fascinating, the epitome of the Outback” says Steve.

People want to have an experience. Nobody gets out and feels the heat and the flies.

“The government wants everything regulated and compliant. If you haven’t got 3 green ticks or accreditation, then you are a no go zone. It’s an imported bubble mentality.

“People come for the opposite, they want to go to a pub with a corrugated iron dunnie out the back, yarning with rednecks over a beer, it’s what the Territory was all about,” says Steve.

“Instead it’s all regulated, sanitised. They’ve killed it.”