Alice Springs now has two Australian dirt kart champions, Joel Orr, in the 100 cc open division, one of the two “formula one” level gokart races, and Tony Connor, in the Statesmen’s (over 40 year old) 100 cc class.

Champions in 13 classes were decided at the national titles. But the big winner was clearly Alice Springs.

Karting club president Jamie DeBrenni says well over 1000 people came to town from four states for the three-day event, setting up a sprawling tent city for their racing pits, and bringing welcome trade to tourism accommodation around the town. 268 drivers aged seven to 65 competed in 350 karts in 108 heats around the 503 metre track next-door to the speedway arena. Speeds over 100 km/h were reached. 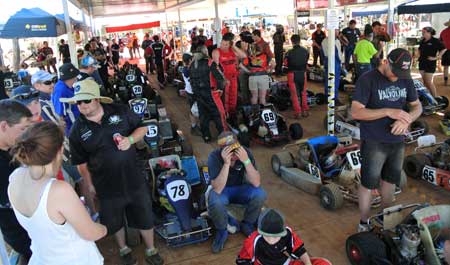 More than 70 volunteers ran the two events – the Aussie and NT titles.

The dirt karts and drivers must be the most often scrubbed competitors and sporting equipment in the world: Except for the winner – provided he or she is in front all the way – the karts and their drivers were covered in The Centre’s red-brown dirt seconds after the green flag dropped to signal the rolling starts. First thing after each race is a big clean-up.

Karting is a relatively inexpensive form of motor racing. New carts are worth around $7000. Most have a 100cc or 125cc two-stroke engine, the more recent ones water cooled. Some karts have two engines.

There’s no differential – both rear wheels get the power equally, which is used to send the karts, just five of so centimetres above the ground, around the corners in spectacular sideway slides.

Classes are defined by engine size and all-up weight of cart and driver.

Starting positions are allocated by a computer, ensuring that all drivers have fair allocations of front, middle and rear of field starting positions. The winners are decided on points accumulated.