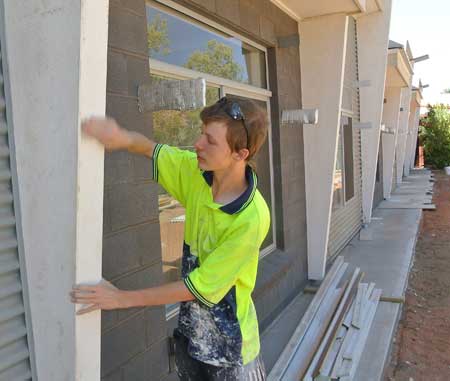 This is the main beef of more than 50 small builders and “subbies” in Alice Springs who are still at loggerheads with their representative body, the Master Builders (MB), over the new fidelity scheme, set up to protect consumers.

Jamie DeBrenni, of the Alice Springs Building Practitioners Committee, explains the problem with how each scheme would deal with a broken internal pipe that, three years after completion of the home, causes $100,000 worth of damage.

Under the scheme abolished last year, the home owner was covered by a 10 year warranty from the Territory Insurance Office (TIO).

TIO would pay for the repairs. It would then seek to recover the money from the builder. The builder may claim that the pipe was faulty and the blame lies with its manufacturer.

That may be an overseas multinational with much deeper pockets than the builder when it comes to funding legal action. In that case TIO may take on the pipe manufacturer, or strike a deal, from a bargaining position much stronger than the builder’s who may have a small ‘mum and dad’ firm. In any case, in all of this the house buyer is protected by TIO.

That protection is not provided by the current arrangements, in the form of a fidelity fund. It covers a number of contingencies during the construction phase but does not reach beyond it, says Mr DeBrenni (at left).

The disaster with the pipe would be a matter between the buyer and the builder. The assets worth $50,000 the builder must have available to cover such a contingency may fall well short. Next stop: court action by the buyer to gain access to other assets the builder or his family may have. In other words, a nightmare.

Mr DeBrenni says the “last resort insurance” in force now offers “minimal protection to consumers and even that has to be fought for, every inch of the way”.

Graham Kemp (at right), executive director of Master Builders NT, disagrees. He says the fidelity fund provides a $200,000 safety net to the home owner which never existed before. Unlike the former TIO HBCF model disbanded last year but favoured by the Alice builders, it covers a builder’s death, disappearance, financial collapse or deregistration. In the event of shoddy workmanship the Department of Consumer Affairs steps in.

Mr Kemp says the new scheme covers non-completion of works, general defects for one year and structural defects for six years: “[The old scheme] was an unaffordable approach, not sustainable. All the risk was transferred to a third party.”

Mr DeBrenni says the progressive payments system, now obligatory by law, ensures that no great sums are at play during construction: payments are made after the completion of each phase, so that the buyer never pays for anything he hasn’t received. Claims likely to be made in the construction phase are for a change of builder – a sum of a few hundred dollars.

The new scheme is also squeezing small operators out of the industry, something “large building companies may be quite pleased to see,” says Mr DeBrenni.

He claims the scheme is making it hard for young people to enter the industry, that MB stands to make a fortune from it and is able to probe the financial affairs of builders, including non-members.

Again Mr Kemp disagrees, saying some of the criticism arises from misunderstandings, but some of the moves are necessary to stop builders like Randal Carey whose fraudulent practices would have been uncovered 18 months earlier had the scheme been in operation.

Mr DeBrenni counters that the problem with Carey was that the Building Practitioners Board was sitting on its hands, not acting on several reports from local builders that Carey was bankrupt and unlicenced.

The Alice Springs News reported on June 4, 2009 – a year before the collapse of the Framptons New Homes scheme with Carey as the sole builder – that Carey was unlicenced and bankrupt. The scheme continued to operate until Carey’s finances completely unravelled in March the following year.

The new insurance scheme is now eight months old and no claims have been made.

When most of the issues raised by the local builders in June this year and earlier remained unresolved, Housing Minister Peter Chandler appointed a review board with members from the justice and treasury departments, and Deloittes. The board has finished taking evidence, is now considering it and is due to make a recommendation to Mr Chandler soon.

MB has a “stronghold over The Small Builders,” and is set to make a fortune operating the scheme, says Mr DeBrenni.

He says: “Remove from MB the intrusive right to oversee the Progressive Payment scheme.”

Mr Kemp counters that the NT Fidelity Fund is operating at arm’s length from MB, has its own board, does not take instructions from MB, reports not to it but to the Minister, operates on a not-for-profit basis and any excess funds are channeled back into the industry for training.

He also says any company contracting to the NT Government, for example, for many years has had to demonstrate to Contractor Accreditation Limited (CAL) that it has assets of at least $50,000 before it can be approved.

Mr Kemp says a similar requirement is now in place for residential builders – big and small: “We treat everyone equally.”

A minimum of net tangible assets – “it can be a speedboat” – worth at least $50,000 has been needed for some years but that is a requirement of the Building Practitioners Board, a government authority, not MB nor the Fidelity Fund.

The recent change has been that builders need to maintain that equity for the entire period of their registration. It had not been uncommon that builders borrowed $50,000, put it in the bank, obtained a letter from their accountant stating it is there, have their application granted, and then withdraw the money and repay it to the lender.

Mr Kemp says the issue of entry into the industry is a work in progress. Applicants for a builder’s licence need to prove “sufficient experience in residential building”.

How do they get it? By working under the supervision of a licenced builder – in a family business that is likely to be the father or mother. They would keep a diary of the training and testify about it to the board. Three projects are needed to have been completed within “a reasonable time,” says Mr Kemp.

He says a mentoring system is under consideration, not unlike a trade apprenticeship. Entrants into the industry now also need a tertiary education Certificate for Building and Construction.

Recommendations for licencing are made by an independent assessor who’s dealt with 6000 applicants so far and who looks at criteria such as time in the business, any black marks and financial equity.

A fidelity scheme has been in operation for 12 years in the ACT and Mr Kemp says he is not aware of any problems there. All states have an insurance scheme instead, which are limited to “fee in, money out” while the fidelity scheme goes further by assisting the builder in his planning, and other functions.

Mr DeBrenni:  Added layers of bureaucracy are making compliance increasingly difficult for small builders to operate, especially for any person wishing to start out in the building Industry.

Mr Kemp: What added layers? I refute that. The process is clear, simple and straight-forward.