Young men get 15 years for gang rapes of European tourists 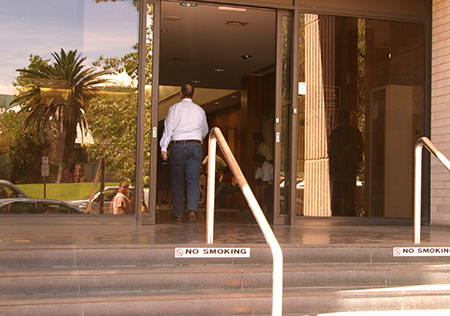 UPDATED 5.22PM: See below for what the court heard about the convicted men.

Eighteen year olds Norman Kernan and Ginger Green were this afternoon each sentenced to 15 years in prison for the armed robbery and multiple rapes of two European tourists who were sleeping in their car in a suburban street in Alice Springs in May last year. The offenders’ non-parole periods were set at nine years.

The head sentences of 15 years reflect a 25% discount on the 20 years Justice Dean Mildren would have given had it not been for their early guilty pleas.

Justice Mildren described their crimes as “not in the worst category” of offending but “at the high end”. Their acts were “outrageous” and had had “devastating consequences” for their victims.

He acknowledged that there had been no “gratuitous violence” such as strangling, punching, kicking etc; that the rifle was not fired; that while the attacks were prolonged, other attacks have been much more so.

He accepted that both were remorseful and that their pleas had saved their victims the ordeal of having to give evidence in court. He also acknowledged that both offenders had spent a long time on remand, in G Block, where circumstances are more onerous than in the rest of the prison.

He recognised the potential for the offenders’ rehabilitation: there is no evidence that they are likely to re-offend in the same way, he said, and while in prison they will mature.

Although he gave priority to the principles of general and specific deterrence, retribution and denunciation in his sentencing, he did deal with the offenders under the Youth Justice Act. If they had been dealt with under the Sentencing Act he would have had to impose a non-parole period worth 70% of the head sentence. As it is, their non-parole period represents 60%.

There were many more people present in court to listen to the sentencing than were there on Wednesday for the guilty pleas. Kernan and Green both scanned the public gallery when they entered the courtroom. Family members of one of them may have been present, sitting in the back row.

Otherwise those attending appeared to be court staff, members of the legal profession and police officers who had been involved with the case. Prosecutor Stephen Robson and the female detectives in charge of the investigation appeared to be satisfied with the sentences handed down. Kernan and Green showed no obvious reaction.

They are both of no more than average height. Green has a slight frame while Kernan is quite chubby. They look a little older now than when they were first arrested but they are not yet grown men, physically. Green was dressed in a blue singlet and Kernan in a dark green polo shirt, buttoned to the neck for the occasion.

In presenting his reasons for sentencing, Justice Mildren commented that Kernan and Green had been adolescents at the time of the offences; that it is recognised “in the literature” that the transition to adulthood is taking longer today than in past times; that the environment in which young people grow up plays a significant role in that transition.

If they are poorly supervised and live in a poor environment they are more likely to offend, to be involved in excessive violence and alcohol abuse. It is not hard to see, he said, how that would be even more likely if they were left to their own devices at the age of fourteen.

This was a reference to what is known of Ginger Green’s personal circumstances. He never really knew his father, and his mother was a heavy drinker. She partnered with a man of Greek descent at Ali Curung and from there the family, which included a number of siblings and step-siblings, moved to Alice Springs and later to Adelaide.

Green went to secondary school at Christie’s Beach High but experienced bullying and racism while he was there and was at times suspended. At age fourteen he returned to Tennant Creek  for the funeral of his paternal grandmother. His father did not allow him to go back to Adelaide, but that’s not to say that he now took his son under his wing.

Green was allowed to drift around in remote communities and Alice Springs – Justice Mildren used the term “couch surfing” – drinking, smoking cannabis, sniffing paint and petrol, scavenging from bins for food. He has never had a job, although he can speak, read and write English quite well.

He met a young woman, lived with her for some time at Amata in SA, and had been back in Alice Springs on his own for about a week when he committed his crimes.

A psychiatric report noted no overt cognitive impairment or personality disorder. It did diagnose a severe substance abuse disorder, now in remission in “a supervised environment”.

Kernan’s parents separated when he was twelve due to his father’s heavy drinking, although we heard from his lawyer on Wednesday that there had not been any domestic violence in the home.

He had been to school in Santa Teresa and at Yirara College in Alice Springs but left when he was fourteen, without any clear idea of what grade he had completed. His literacy skills are “limited”, according to his lawyer.

He began drinking at age sixteen. In the month before the crimes, his mother, with whom he had been living at Amoonguna, was away doing some training interstate. He was living alone and spending his time drinking in “bad company” in Alice Springs. Like Green, he had never had a job.

Neither young man had prior convictions for violence or sexual offences. Green had no priors at all, while Kernan had to his name a large number of traffic offences committed in 2011 and had again committed property and traffic offences in the weeks leading up to the rapes. These were dealt with after his arrest; he was given prison sentences, which expired at the end of January this year. The sentence he received today is backdated to then, while Green’s is backdated to the date of his arrest on May 4, 2012.

Both men had been drinking when they attacked the women although neither sought to rely on this as any sort of excuse for their crimes.