Three one act plays, written, rehearsed and presented all within 24 hours: it may not sound like it would reward high hopes, let alone exceed them, but it did. The stories were fresh, relevant, moving as well as funny at times, the performances committed, the theatre-craft well on the way.

This was Red Hot Arts Central Australia’s 24 Hour Theatre, an early exercise of the organisation’s InQbator and presented as part of the Alice Desert Festival program. Expressions of Interest were called for some time ago: two local writers put their hands up, Michael Watts, with considerable experience as a playwright behind him, and Blair McFarlane, new to writing for theatre as far as I know. The third writer was Anni Finsterer, from Sydney, who has a broad background in theatre and film as an actor, writer, director and teacher.

A lucky dip was held for the plays’ settings. Watts got “a house ready for demolition”. The actors meanwhile had drawn one prop each from their lucky dip. The directors then drew their actors. Watts got Mike Bodnar, who came with a bunch of artificial flowers, Luke Scholes, who had an iron, and John Bridgefoot, with a rake. McFarlane drew “an ice-creamery” for his setting, then the actors Scott Fraser, with a sand bucket, Kirryn Wilkinson who had a radio, and Lisa-Marie Ryan with a rubber duck. The visitor, Finsterer, got “the cab of a pick-up truck” for her setting, and actor Tanya Maxwell (formerly Dann, a familiar of the Alice stage).  She came with a teapot, while Cindy Foster had a brick.

This was at 6pm Saturday evening. Twelve hours later, when most of the rest of the town was still sleeping, the writers had done their job, the actors got their scripts and the project’s three directors got to choose which play they would take on the basis of the title and a two-line description of the action. Finsterer got her own play, which she titled The Hunt; Steve Hodder chose Ice Cream for the Marine by McFarlane; and Katelnd Griffin picked Watts’ Boxes. Each production also got assigned a stage manager with a $100 budget: Cy Starkman for Boxes; Kim Steblina for The Hunt; and James Loveday for Ice Cream for the Marine.

(An aside for a moment. There are three names in this roll call – Kirryn Wilkinson, Katelnd Griffin and James Loveday  – that came on to this project at 6am on Sunday after having performed the night before in the Nine Lives Cabaret. On top of that Wilkinson had performed on Friday night, twice, in Dusty Feet’s Dance Jam After Dark, for which she also had a choreography credit; Griffin had directed and performed in Circus Dust’s philosophe, in matinee and evening shows; and Loveday had also performed in philosophe, twice. Now that’s energy and commitment!)

Enough on background, now the experience. The curtain goes up for Watts’ Boxes.

Above: Luke Scholes as Po, Mike Bodmar as Mo in Boxes.

What I didn’t expect to see was a great set. Simple but so artful. This was Starkman’s work. Strong lighting slanting in from the side and picking up the surfaces of cardboard boxes, lots of them of different size, arranged like so many totems on a ritual ground. It was convincingly “the most beautiful house in the world”, as the character Po (Luke Scholes) sees it, while at the same time it could be credibly dismissed as worthless by Joe (John Bridgefoot) when he arrives as the advance party for the demolition.

The story operated at more than one level. Po, who was doing the ironing, and his companion Mo (Mike Bodnar), who only communicates in numbers and equations, could be seen as the kind of eccentric marginalised people who can be found in towns and cities anywhere, vulnerable to the larger forces of economic imperative or, some might say, ruthless greed. Bridgefoot with his height and loud voice, wielding the rake, pushing over boxes left and right, was suitably arrogant and threatening in this role.

Po and Mo’s eccentricity could also translate as the ‘otherness’ of the original people of this country, and the drive to push them out of their home, as the colonialist project, a theme close to Watts’ heart. They become the project’s “collateral damage”.

The story unfolded simply, touchingly, and with humourous moments. The talk in numbers yielded some good lines: Po, who understands what Mo is saying, interprets – “It’s a complex problem”, and plays on Joe’s mystification –  “He’s putting a curse on you.”

Boxes had set the bar high. The other two productions did not come near it for set design but were equally impressive in other ways. 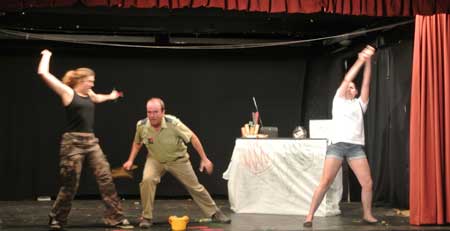 Into the banal everyday setting of an ice-creamery McFarlane drew some of the major themes of our time, with not a soapbox in sight. It was very lightly done while leading to quite an emotional climax.  His American Marine (Scott Fraser), who has put ashore in Darwin – as they are doing in increasing number – wants to buy an ice-cream. While waiting – I somehow missed why it was taking so long, one of those ‘the computer says no’ moments, I think – he starts chatting to Booty Babe (Wilkinson) who’s killing time dancing to her radio.

Above right: Kirryn Wilkinson, Scott Fraser and Lisa-Marie Ryan in  Ice Cream for the Marine.

She tells him jokingly that he’s “one of those boat people” – she’s got the devastating logic of someone who doesn’t really care but is not blind either. Then she blunders on into asking him how he won his war medals and before he knows it he is undoing the heroic American Marine narrative and telling just the simple truth of war: lives get lost, specifically his brother’s, and men grieve.

Then McFarlane just picks it all up again: Bored Teen behind the counter (Lisa-Marie Ryan), brings Marine an ice-cream, which “always makes everyone feel better.”  The moment of tragic truth has gone. The trivial present is so much easier. Bored Teen asks Booty Babe to show her some moves. Exit stage right – shaking booty, of course.

Last play, The Hunt. It starts with a monologue. Georgie (Cindy Foster) is talking to someone we can’t see. Her questions and reactions are around that someone never having seen her mother on stage. We get the feeling she is talking about herself, or that she is replaying a conversation that she has recently had. Either way, I was being drawn in. Foster was giving a lot to this performance and the writing was convincing. 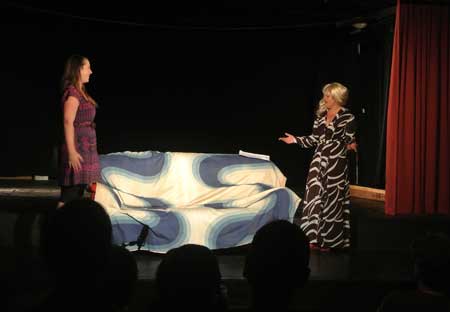 Tash (Tanya Maxwell) arrives, a platinum blond narcissist. Sure enough, she turns out to be Georgie’s mother.  The core story emerges: she gave her six-year-old daughter the choice of whether to go with her or stay with her father, a choice Georgie to date has not recovered from. If she seeks her out now, it’s to try to put it to bed in her troubled heart.

Left: Cindy Foster and Tanya Maxwell in The Hunt.

The pick-up truck was worked into the story by belonging to Tash’s stalker, Phillip, who had met Georgie outside the theatre where they were both trying to see Tash. They had made their way to Tash’s house, parked outside and Phillip has tried to come onto her. Georgie has laid him out cold and he is now in the back of the truck. Mother and daughter exchange stories on how they’ve dealt with him, with a sense of solidarity.

This allows the more difficult emotional business between them to surface. Foster was very moving in this scene; you could see the old pain and sadness rise in her, nothing histrionic, just a glisten of tears, a trembling of the mouth, as she realised that her mother has nothing to give her.

Finsterer loaded up her story with a bit too much, however. Dealing with having been abandoned by her mother would have been enough (that’s quite a significant life event and this was only a one act play) but Georgie has also done gaol time for causing, at age 15, the death of an old woman whom she robbed, pressured into doing so by some bullying junkies. As this play is further developed, I think this element of the story could be dropped.

Georgie finally goes, leaving Tash to reflect on her choice of the theatre over her daughter. Finsterer offered here quite a meditation on the actor’s art. For Tash in the end it came to this, that she felt more alive on stage that in her own life, a kind of fatal attraction that cost her daughter dearly.

Joe Pickett, festival manager, in introducing 24 Hour Theatre, said the project’s main aim was to seed new work. It has done this admirably. No doubt all three plays and their productions will be further refined and presented again to a wider audience. Something to look forward to.