The risk in going risqué 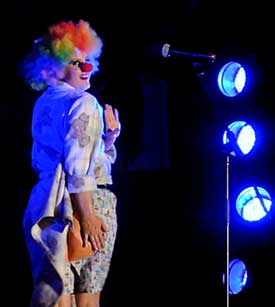 Tits, bums, fart jokes, striptease right down to the cliché of breast tassles  – whatever happened to Cat’s Meow? From the audience response to the Nine Lives Cabaret last Saturday night, I know mine is a minority view, but for me this entertainment was one-dimensional. The talent was there but story, ideas and wit were mostly missing.

There were laughs to be had, for sure, but they weren’t for anything clever or simply zany, though Desert Tramp (Nicole Pietsch, Peter van der Pasch, below left)) was getting there, OK Brothers (Elspeth Blunt, Miriam Pickard) too, even if their brief act seemed very similar to the last one I saw. For most of the creators it was as though in deciding to go more risqué, to put on more of a burlesque, they had regressed to adolescence.

Zaniness and story-telling were hallmarks of the earliest Cat’s Meow shows, owing in good part to Franca Barraclough as a key creative driver. She is no longer involved and, in this show at least, no-one was filling her shoes.

Individual acts were devised by their key artists. They went through an application process and once accepted were given feedback and suggestions by Melissa Kerl as  director. There was no overarching theme or story. Milyika Scales’ Nine Muses punctuated the whole but didn’t lift it up or tie it together. It was really just more of the same.

If sagging body parts were a sight gag (that went on and on) in Don Kitchetty (Katelnd Griffin, James Lovesday), she gave us her version a little later (top right); if toilet humour was the driver in Silhouwet (Clare Woods, Doug Suter, Sarah) she took it further with her ninth appearance alongside a gassy ‘Bumbelina’ (Carmen Emmisons); if getting down to breast tassles was, it seemed, the whole point of the otherwise static Odd Creatures Burlesque (in which she appeared alongside Daisy, Danny and Bec) she gave the tassles another workout in the finale. The exception, in one of her nine incarnations, was a very slow, almost ritualistic removal of garments beneath a shimmering veil, in low light to sombre choral music, the only skin-bearing act that gripped me in any way. 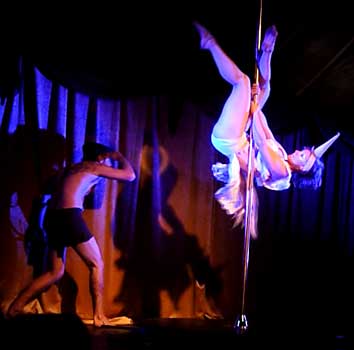 Scales is beautiful in face and body, with flawless milky white skin, and she has presence on stage. I’d love to see her given a good script to work with – as audacious and hilarious as you like, but with some depth and emotion too.

A few acts went in different directions. Bethany Uhe (bottom right) gave a compelling rendition of The Dresden Dolls’ “Missed Me”, with Katelnd Griffin on drums. The glitzy fun and sensuality of the cabaret tradition was spelled out in C.A.B.A.R.E.T. – Jordan VanderSchuit, Miriam Nicholls, Tabitha Young, Kirryn Wilkinson and Erin Knickel (bottom left)  performing and main choreography by Sila Crosley. Hayley Michener as a unicorn and Peter van der Pasch (right) as its hunter brought a fairytale feel with just a touch of ribaldry to a pole dance called Rainbow Love.

Cat’s Meow can be proud of their 17 sell-out shows since 2007, involving over 400 performers and entertaining more than 5000 spectators. I’ve seen many of them and look forward to more but hope next time there’ll be more going on between the ears, not mostly below the chin. 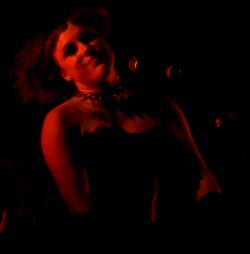 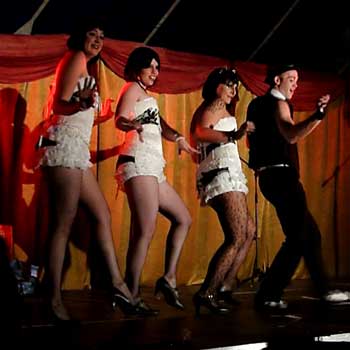