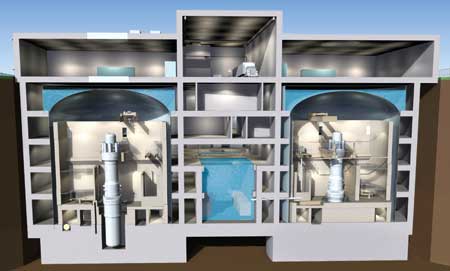 Talking about CoolMob’s roadmap, what is the elephant in the room? Nuclear power, as comment writer “Robinoz” has also observed.

We have plenty of uranium within a stone’s throw of town (anyway, the quantities needed are minuscule). The area is geologically stable – ideal for storage of waste. And we are a long way from the national power grid.

There is no doubt the cost of gas and diesel we’re burning now is set to increase massively, while we belch greenhouse emissions into the atmosphere for half a century plus.

To provide 100% of power from renewable sources, such as solar – the dream of the roadmap writers – will take that long, if it can be achieved at all.

The answer? An SMR – a small modular reactor.

The following information is from Ben Heard, of Think Climate Consulting (motto: “We exist to fix climate change, and make our future better than our past.”)

He was recommended to us as a source by the Australian Uranium Association (AUA), which says it does not itself “advocate nuclear power in Australia”.

Alice Springs has a peak demand of 55 MW. Most of that – 45 MW – can be provided by an SMR being developed by the US company NuScale, says Mr Heard.

It fits on a rail truck, is a cylinder 20 metres high and 2 metres in diameter, and is marketed as being able to run for 60 years with two years between refueling.

It uses “natural forces to operate and cool the plant. This eliminates the need for many of the large and complex systems” says NuScale – no pumps whose failure could lead to accidents. This provides low maintenance and high reliability.

The cost of $225m is daunting but while the future cost of fossil fuel is the stuff of horror stories – just ask Dick Smith – we could buy nuclear fuel now, at today’s prices, enough for the next six decades. The estimated fuel cost for the SMR is 2 cents per kilowatt hour. The NT Power Water Corporation’s current domestic rate is 25.91 cents per kilowatt hour.

The emission free operation could be extended, with an added module, to power the passenger and freight trains on the Ghan line – if it was electrified. Each module would provide heat for industry, homes and tourism accommodation in town. The waste would fit into a largish room.

Of course, the prohibition in Australia on nuclear power stations would need to be revoked (the Environmental Protection and Biodiversity Act) – and a million other things done.

Says Amanda Walker, the AUA’s Communication Manager: “Whether Australia goes down the path of utilising nuclear power in the future is a matter for governments to decide, however the AUA believes that all energy options should be ‘on the table’ for addressing Australia’s future energy challenges, including nuclear power.

“It is a reliable source of emissions-free electricity; it is sensible that it is considered as one of our options to help reduce Australia’s carbon emissions.”

This when you to shout: “No bloody way.” Or is it?