Violence must stop. Forgiveness must rule. 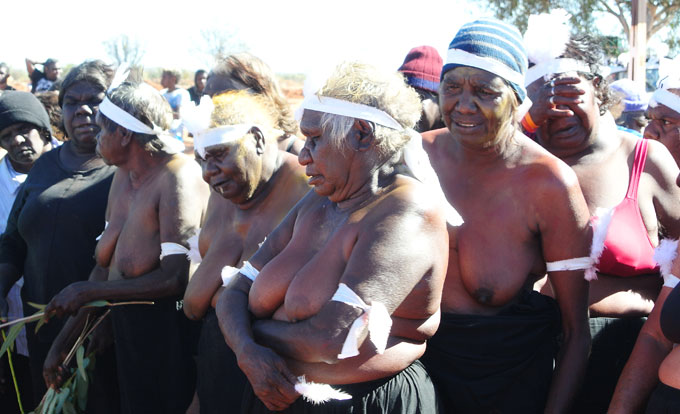 The laid-back, slow, lazy mood in the outback town of Yuendumu can snap into one of high drama and heart-wrenching emotion in the blink of an eye. Today, the 50th anniversary of the Yuendumu Sports, was such a day.

We rushed to cover the 300 clicks from Alice Springs, mostly bitumen, in time for a cultural induction from Pintubi, Anmatjere, Warlpiri Media, know as PAW, set down for 11.30am.

We feared that we were in for a lecture from one of the notorious white gatekeepers about the bleedin’ obvious. Nothing like it. Warlpiri man Simon Japangardi Fisher welcomed us and said: “Make it a positive story.” We chatted about common acquaintances and with a smile he handed us our media passes.

Like all whitefellers we came with a firm agenda: media briefing … reconciliation march at 1 pm … women’s corroborree … official opening of the annual sports day … children’s sports in the afternoon … disco in the evening. But like few whitefellers, having worked in the bush for 40 years, I suspected the agenda meant nothing and I was dead right.

The children had had their sports in the morning and we’d missed it. At 1pm sharp we went to the arch over the road into the community, the scheduled starting point for the reconciliation march. Nothing.

I noticed the arch had seen better days: it once bore a sign saying “Welcome to Yuendumu” or words to that effect, but much of the sign has broken off and the rest has faded.

Apart from the ever present dogs, which can launch themselves into a savage fight at the drop of a hat, no-one gets fazed. Street life in Yuendumu is slow. People walk around without haste. Cars cruise slowly. So do the police paddy wagons, including reinforcements from Alice Springs for the weekend in a town which had been in the shadow of lethal violence for years.

The town’s nice buildings are government ones, Centrelink, shire. The Place for Caring for Old People is neat. Most houses, despite their relatively low age and generous size, are in the same state houses and yards in Yuendumu, population 800, unemployment rate of 65%, have been for decades: in a shocking, unnecessary mess with garbage strewn around empty rubbish bins. No-one seems to lose sleep over this. What is new are satellite TV dishes on most homes.

We almost inadvertently entered a women’s camp where old ladies were getting ready for a ceremonial dance: that would have been a big no-no, but a white woman working for a women’s program averted that embarrassment. When will the dancing start, we ask her. “I don’t know. We take things as they come.”

Back to the arch. It is now 2.15pm and groups of people are gathering. The people in the groups keep close to each-other. Young men, some in football jerseys. Young women, most of them barefoot and many with small children. Old women carry twigs of bushes. Later in the march someone hands out paper flowers in garish colours. Old men, under the guidance of Harry Jakamarra Nelson, are getting the procession organised.

We’d been asked not to photograph the march. The first shots of the weekend, we were asked, would be of the women’s dancing at the opening at the football oval (red dirt, not a blade of grass).

And suddenly women are crying, wailing and hugging each-other. The faces of the black crowd turn sad, stony and solemn. A grey nomad couple snaps pictures. A police officer tells them to stop. 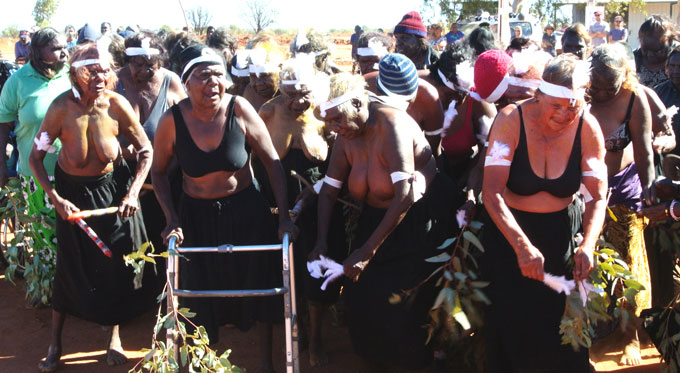 Then the procession – some 300 people – moves off. At the end of the march, a respectful distance behind, are members of the 100-strong whitefeller contingent who hold the town’s top jobs.

The old men are in the front but ahead of them is a row of about 10 children, carrying two banners: one the Aboriginal flag and the other the black and white emblem of the town’s football side, the Magpies. And amongst the marchers, walking side by side, are members of the two clans which had fought a bloody payback feud for several years, started by the death of a man attributed to sorcery.

Today, the crowd has decided, an end will be put to the conflict.

At the oval the message becomes even more intense: the women dancers, some of them very old, one of them on a walking frame, most of them bare breasted, have put white feathers in their hair. They come walking to the oval across a dusty, rubbish-strewn flat from their painting-up camp. Their dance is accompanied by their chanting which often and spontaneously changes into wailing.

They cry and hug each-other: it is a rare occasion for members of two clans to be dancing together. Today they are. The women are making it clear: violence must stop, forgiveness must rule.