Ode to a Sombrero: Neil Murray 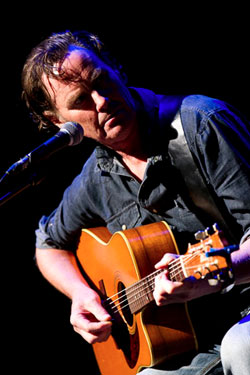 Occasionally, something comes your way – out of the winter chill, down a long road, whipped up by summer storms and whirly whirlies big enough to carry your humpy or your sombrero away – and you know that there’s still a chance that dreams can be built on songs, rather than breaking upon the walls of laws that are sown upon the wind.

A copy of  Sing the Song: The Essential Neil Murray double CD fell into my lap recently.  To those who don’t know, Neil Murray is sometimes referred to as “the whitefeller in theWarumpi Band”, one of the Aboriginal rock ‘n’ roll bands that emerged out of Alice Springs in the 1980s to make recordings and storm stages in the big cities of Australia.

Neil wrote ‘My Island Home’ which is on this CD, along with ‘Eddie Mabo’, but lesser known songs like ‘Lights of Hay’ and ‘Native Born’ give the weary heart pause for reflection.

This double CD release through ABC records, contains 32 of Neil’s songs, spanning thirty years in a career that has taken him across the country like an emu, sometimes strung out on the fences that have risen out of the ground like angry totems that divide the Australian tribe; sometimes the rocky patches have arisen through emotions and dreams that prove too much to manage, but the musical journey remains a true testament to an artistry found in a collection that takes you on that continuing journey.  We are the richer for it.

The old Akubra Sombrero features in ‘Meet Me in Bedourie’, Neil’s attempt at writing a “country” song, the kind that could get old bones up on the floor and waltzing again.