Call to block oil and gas exploration at King's Canyon 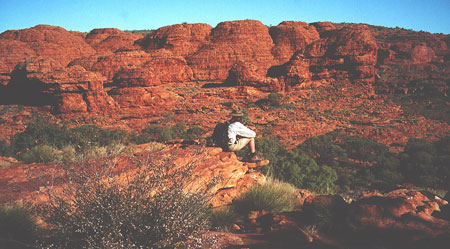 Traditional owners of Watarrka (King’s Canyon) National Park are strongly opposed to an application by Palatine Energy Pty Ltd to begin oil and gas exploration in the park and are demanding that the NT Cabinet block it, the Central Land Council (CLC) said in a media release today.

It says the traditional owners told CLC staff at a meeting in March this year that they are concerned about the impacts on the cultural values and flora and fauna of the park and are strongly and unconditionally opposed to any exploration in the park, south-west of Alice Springs.

“The park hosts many significant cultural sites, is a renowned tourist destination and supports a rich and diverse number of species and habitats. A number of threatened species are found there also.

“The traditional owners also said they had worked hard to get small tourist businesses off the ground and the park provided jobs and opportunities for their young people.”

The release quotes CLC Director David Ross as saying that allowing exploration in Watarrka cuts across the core values of the joint management agreement and violates the very idea of declaring national parks which is to protect those areas from this type of activity.

The statement says traditional owners are also concerned for their tourist businesses and for tourism generally in the area.

The exploration applications cover the entire Park and if granted, would lead to a range of exploration activity and may include hydraulic fracking.

“Traditional owners have previously agreed to exploration in areas outside the park, and it is only within the boundaries of the park that they object.

“The Park is owned by the Watarrka Park Land Trust under NT freehold on behalf of the traditional landowners and jointly managed by the traditional owners and the Parks and Wildlife Commission of the Northern Territory,” says the statement.

“Title to the park was returned to traditional owners in 2012 under the Parks and Reserves (Framework for the Future) Act.
“Under this legislation traditional owners do not have the right to veto exploration proposals, and the decision as to whether exploration will go ahead sits solely with the NT government.

“The Draft Joint Management Plan for the park identifies the Park as ‘a world class tourist attraction; an internationally significant conservation area; and a living cultural landscape’.

“The plan also notes that the park ‘protects one of Australia’s most stunning natural and cultural environments and contributes significantly to biodiversity conservation and the Territory economy.”

Letters from the traditional owners have been sent to cabinet Ministers and the Northern Territory Government says the proposal will be considered at the next cabinet meeting, the release says.