Minutes of a meeting never held: the farce ends here? 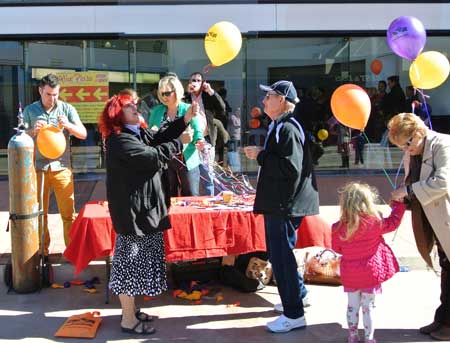 The farce of presenting a Finance Committee report with nothing in it was called into question by Councillor Eli Melky at last night’s end of month council meeting. Chairman of the committee Cr Brendan Heenan asked in formulaic fashion for the minutes of the Open Section of the meeting to be taken as read and confirmed – as happens most months. But there were no minutes as there was no Open Section of the meeting.

Cr Melky asked Director of Finance Paul Della if there wasn’t at least something that could be regularly itemised, to avoid the “flick through”: “It almost makes it seem like we don’t want to deal in open,” he said, to the vigorous nods in agreement of Deputy Mayor Liz Martin.

Mayor Damien Ryan suggested that the matter be dealt with in the next round of committee meetings. Cr Melky seemed to then ask the mayor to follow through but it will surely take more vigorous effort on his part to shift what has become entrenched practice for this committee.

Above: Councillors distributing balloons during the recent opening of northern Todd Mall, from left, Chansey Paech, Liz Martin, Jade Kudrenko, Steve Brown. Cr Dave Douglas in the background, taking a break. He was congratulated for having blown up more than 800 balloons on the day.


How not to ask

Council regularly dispenses cheques for small amounts to support community activities. Last night councillors agreed to support local athlete Emma Kraft’s participation in the world mountain running championship in Poland to the tune of $1000; the Wearable Arts Awards, with one performance only this year, will get $2500. They also gave the tick to council’s in-kind silver sponsorship of the Mbantua Festival, worth at least $50,000. But a request for $15,000 by Desert Knowledge Australia to support “Intercultural Collective Impact projects across the Tri-State region” was knocked back without discussion.

It seemed that no councillor demurred from the executive’s conclusion that the objectives of the program were unclear and that in any case it represented “cost shifting”, as early childhood development – this much had been gleaned from the submission – is “clearly not a responsibility of council”.

It would not be hard to imagine the opposite being argued, even passionately by some councillors, but the attached two page submission – one page of jargonised argument, one of definitions and lists of attributes and functions –  gave them nothing to work with. It was a classic of its kind, full of strategic focus, vision, agencies, mentors, outcomes, approaches (complete with academic references) and exhortations to work together. But doing what, exactly? Who knows?

Council representatives Mayor Ryan, Cr Steve Brown and Acting CEO Greg Buxton met with Geoff Horni, described as an executive director of the Department of Transport, about the pedestrian crossing south of the Gap. Mayor Ryan reported back to council that Mr Horni is “not keen at all on shifting” the crossing. Mayor Ryan questioned the pretext of sacred trees in the vicinity governing the positioning of the crossing, saying that there are no trees there at all.

Cr Heenan urged council to keep up the pressure to eventually get the crossing moved. Deputy Mayor Martin said she has met with road train operators who strongly oppose its present placement. She also pushed for the addition of safety mesh to prevent children jumping from the crossing to the road. She said she has seen several children doing this since council last met. Mesh will “save a child’s life”.

Yes, you can! Bikes and skateboards in the new mall

Cr Chansey Paech wanted to know council’s attitude towards pushbikes in the newly opened northern end of the mall.  Mayor Ryan said he understood that cyclists are free to ride on what is now a road, but they must walk their bikes through the pedestrian mall, from Parsons Street to Gregory Terrace.  Cr Paech thought a marked pushbike lane would be appropriate in the pedestrian mall. Mayor Ryan suggested he take it through the Environment Advisory Committee, chaired by Cr Jade Kudrenko. She was keen to take it on and more, wanting council to review broadly the way it supports cyclists. 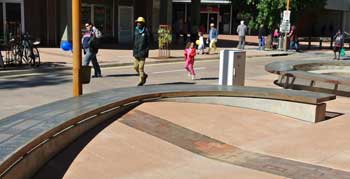 Cr Paech seemed to take this suggestion as a rebuff, protesting that he was doing his job, bringing to council’s attention the views of a large number of constituents. Crs Heenan and Dave Douglas expressed their concern about cyclists riding on footpaths and skate-boarders skating in the mall. If council banned bikes and skate-boards, who would be in the mall, Cr Paech wanted to know, asking explicitly about the new skateable seating (pictured) at the northern end.

Mayor Ryan said the ban on cycling and skateboarding is only in the pedestrian mall. If there is a sign to this effect at the northern end, it should be removed.

A detailed report on the asbestos found in the library, complete with photos and, most importantly, an Asbestos Clearance Certificate, was included in last night’s business papers. Inspection found “no visible asbestos residue (in accessible areas) from asbestos removal work” and “the airborne fibre level was less than 0.01 fibres/ml”.