Social woes: it's all about having a job, says ALP's Nova Peris 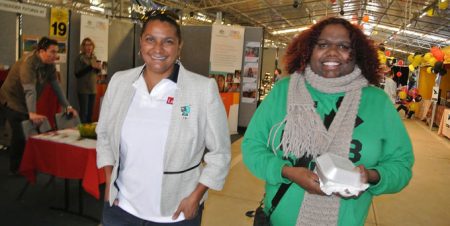 When it comes to picking an attractive candidate it doesn’t get much better than Nova Peris: She is thoughtful, a good communicator, energetic, a sporting star, Territory born and bred and good looking.

For a Labor candidate she is surprisingly conservative on some issues, quoting that four-letter word – work – as the key to fixing much of what’s wrong in the Territory. Far from focusing on just Aboriginal issues she says fixing the live cattle export industry will be one of her top priorities.

But for now she says: “I’m only the candidate and my focus right now is listening and understanding the issues.”

At the Show on the weekend her presence was the highlight of the ALP stall. A mother of three and grandmother at age 41, the placement by dumped Prime Minister Julia Gillard of the Aboriginal girl from Darwin at the head of the Territory Senate ticket raised some ALP party hackles. According to media reports, the nose of her predecessor, the bland Trish Crossin, is out of joint.

We could not contact Rohan Foley, president of the Alice Springs ALP branch, but a prominent member says here there are no hard feelings about Ms Peris in The Centre.

She was a member of Australia’s Hockeyroos which beat South Korea in the final at the 1996 Atlanta games, becoming the first Aboriginal to win Olympic gold. In 1998 she again won gold in the 200 metres and 100 metres relay at the Kuala Lumpur Commonwealth Games and in 2000 made the semi finals of the 400 metres at the Sydney Olympics.

NEWS: The Territory’s troubling issues – crime, alcohol control – are mostly in the court of the NT Government but there is one issue Federal government has to answer for: Passive welfare, supplied by Centrelink. We have lots of land, water and a certain level of transport infrastructure – but we can’t marshal the thousands of unemployed into agriculture, cattle or tourism ventures. Should the dole be stopped where work is available? What would you do?

PERIS: Unemployment in the NT is regarded as low but in the remote communities it is high. I am definitely all for creating employment through use of the land. If someone doesn’t have a job, that’s where social issues start. You’re bored, you have a sense of hopelessness. When you do have a job it gives you a sense of pride. You’re earning your own money, you can provide for your family, you’re putting a roof over its head. All these things.

I met with Grant Fenton from the NT Farmers the other day. We talked about creating real jobs, real income, in particular for Aboriginal people, and the use of their land. That’s one thing so many Aboriginal people have said to me: We want to create something that’s sustainable, over the years. If the parents have a job, the children are going to say, they’ve got a job, so that’s what you do.

NEWS: Let me give you two examples. There is a broad acre watermelon plantation in Ali Curung. Despite the massive unemployment in that region, farm labourers have to be drawn from outside. There is a large commercial vineyard at Rocky Hill producing 1000 tonnes of table grapes. Pruners and pickers are Vietnamese people brought in from the Riverland while there are idle people in Santa Teresa and Amoonguna, a stone’s throw away. What would you do?

PERIS (types a note about Ali Curung into her mobile phone): You’ve got to go and speak to the people. Do they know these jobs exist?

NEWS: If they don’t someone should have a talk to Centrelink.

PERIS: If someone is sitting down [does not have a job], why are they sitting down? You’ve got to ask that question. I find it’s not hard to motivate people. That’s just my experience. But at the end of the day people must want to help themselves.
Tiwi Islands people are saying, we have very capable people here. Strong men who want to work and they’ve had enough of the fly-in, fly-outs. I haven’t been south of Tennant Creek a lot, I’m going there next week, I will speak to those people as well.

NEWS: Centrelink obviously knows about the plantation at Ali Curung, and they also know about the vineyard. If Labor is re-elected and continues to control Centrelink, what will you be saying to them?

NEWS: Should the dole be stopped when there are such opportunities, even if they are intermittent?

PERIS: If work is available, people should have the opportunity to work.

NEWS: They have the opportunity. Many don’t take it.

PERIS: As I said, do I believe that people should work? Yes, I do. There is your answer.

NEWS: Should the dole be stopped – as it’s the case in the rest of the country – if a recipient doesn’t take a job offered?

PERIS: If the opportunity is there for you to work, and there is no reason why you can’t take that job, then yes, that’s the answer. Everybody should contribute to society in a fruitful way. Set an example for your children. Education: Yes. Work: Yes. Healthy life: Yes.

NEWS: The other problem is alcohol abuse. To deal with it is mostly a Territory responsibility but Canberra has the money.

PERIS: Again, why are people taking to alcohol? All of those people probably don’t have jobs. And this has absolutely the most horrific, devastating effect. I believe the Banned Drinkers Register certainly worked. When you hear about full strength alcohol being allowed back into communities you are just adding to the already terrible social issues that are occurring right now. We’re talking about adults now. Nobody likes being told what to do.

Change needs to come from the grassroots. Umbakumba on Groote Eylandt, for example, had a huge alcohol problem. That problem is gone. That is a community that has beaten the problem.

PERIS: I hate the name.

NEWS: What would you call it?

PERIS: I need to be speaking to people out there in the community.

NEWS: You only have  a few weeks to the election.

PERIS: That’s all right, speak to me in two weeks’ time.

NEWS: What will be your five top priorities if you are elected?

PERIS: I’ve thought about this. Problems with live cattle exports have really hurt the Territory. I will work with the respective parties to get live exports back on track.
I will look at where the mining boom, including INPEX, are at, especially the prioritising those jobs for Territorians. They are perfectly capable, yet we still have a lot of interstaters coming in [driving up rents and cost of living].

We need to have a discussion with Territory kids about their expectations. We have a Chief Minister saying we’re open for business, but we have to take the Territorians with us. That’s number two.

We need to look at services for our elderly people, such as respite care. My mum is a pensioner, she’s served her time. Simple things, like making old people paying a dollar for a bus fare while installing WiFi … it doesn’t make sense. Small things are hurting people.

People in the communities are not informed. They don’t know what’s going on. Some companies going into communities to do business need to be made accountable.

NEWS: There has long been a push for changing the landrights act, to allow smaller land councils, or sub-councils that have responsibility for land management and mining royalties, as well as providing individual property rights so that people can live and run businesses on their own land.

PERIS: Communities want to use their land, create jobs. Communities have to become economically sustainable. It’s all very well to be trained up, but you need economic development to use your skills.

NEWS: Do you find that Top End Aboriginal people are more assertive than those in The Centre, more self-certain and active?

PERIS: There are more activities in coastal areas, more opportunities. Desert people do it tough, in the extreme weather. I have another two months to spend some time with people down here.
It’s not for me to be saying, this is what you should be doing. Having ears and eyes and learning what’s happened in the past … what am I going to do in the future to help those communities, make them sustainable, so Aboriginal people can become proud Aboriginal people, that’s my objective.

PERIS: I went to Uluru not long ago and I know how much tourism is hurting there. But look at the price of flights, that’s probably one of the big issues …

NEWS: And the cost to be there?

PERIS: … and to be there. When you go down south, everyone wants to come to the Territory but it’s too expensive.

Ms Peris, at left in the photo at top, is pictured at the Alice Springs Show with law student Que Kenny, from Hermannsburg.