Town camp artists do it their way


They are a group of people about whom much is said and written by others, but here is chance to see residents of the Alice Springs town camps express themselves in their own images and words. They tell us about daily life, spirit life, memory, reflection, aspiration. There is humour, affection, yearning, delight, pride.

Two Alice Springs art centres have combined to present this exhibition, Our Way, Their Way, at RAFT Artspace. One is Tangentyere Artists, which supports around 400 artists across the 18 town camps and has its base in Elder Street. The other is Yarrenyty Arltere Artists, a smaller operation based in Larapinta Valley town camp. The show comes together well as a many-faceted whole, but intriguingly the artists from the two centres  work in quite different ways. 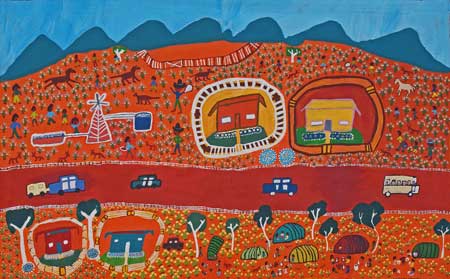 Many of the themes of the Tangentyere artists – the historical past, contemporary life, the  ongoing connection to traditional lands – are captured in the work of the artists represented by the three large paintings on the eastern wall of the gallery.

Margaret Boko’s painting, Papunya in the 1960s (at right), emphasises the impact of settlement: the road busy with vehicles cuts through the picture plane in a red slash; the neat-as-a-pin houses with fences, flowerbeds and lawns, but no people, are the dominant motifs, overshadowing the nearby ‘humpies’ around which women and children are gathered. Beyond, men in their cowboy hats and boys are working with cattle and horses; a windmill provides a watering point; there’s a stockyard in the distance. Yet even as this new activity on the land is underway Boko shows, with a little family group on the right, the survival of traditional food gathering.

Everything in the Papunya painting is happening all at once, which is Boko’s point, the meeting of the old and the new. In her Dead Heart at Jay Creek she uses more of a story-board technique as well as written text  to tell a story over time. I’d almost forgotten about the 1996 film, Dead Heart, featuring Bryan Brown and Ernie Dingo, until this painting reminded me. Boko seems to be recalling an anecdote from the making of the film, where presumably Jay Creek was the location and Dingo, the famed Western Australian Aboriginal actor, had his own desert experience, camping in the hills alone at night and treated to some traditional singing and dancing in the morning. 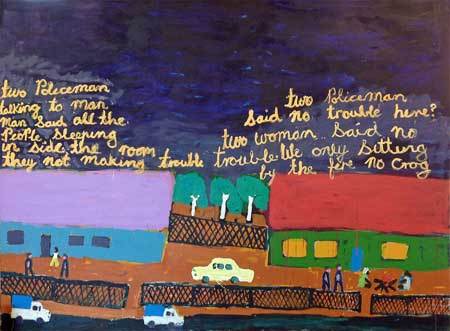 Sally Mulda in a number of canvasses lays out her careful observations of life in the camps and on the streets of the town. In the large painting, No Trouble Here? (at left), from her Intervention Stories series, the scene is at night; police visit two separate houses and find no trouble – people are sleeping or sitting together around a fire, “no grog”. Mulda has a disciplined reporting style, sticking to what she observes without embellishment. In some works her tone seems detached, as if she simply wants to say, “This is the way it is”. For instance in The Drunk Man, she shows, in pictures and text, police taking a drunk man to gaol; in Waiting Outside Piggly’s (both versions), Aboriginal people are sitting patiently on rocks opposite the store (a scene readily recognised by anyone who walks or drives along Gap Road); in Abbots Town Camp and Little Sisters Town Camp Life, she depicts social scenes, people around fires, playing cards, sleeping, dogs.

But in No Trouble Here? Mulda seems to be making more of a point: there’s a sense of people unwarrantedly having their peaceable night-time activities disrupted. “Why have you come?” seems to be the sub-text in reply.

Alison Inkamala’s large Karrinyarra (Central Mount Wedge) (below right) and indeed all her work on show is very different from these story paintings. There are other artists whose subject is the connection between town and country, such as Dan Jones with Soapy Bore and Loading Truck; Grace Robinya’s Laramba Sports Weekend, full of interesting detail; Louise Daniels’ Women Out Bush, showing black and white women together out bush with some of the modern accoutrements of a camping trip, even tents and a table and chairs; Anna Seven’s Jim’s Place – The Camel Farm, showing the fenced pond, and Looking for Kapi, which also seems to be bush trip undertaken by black and white together. 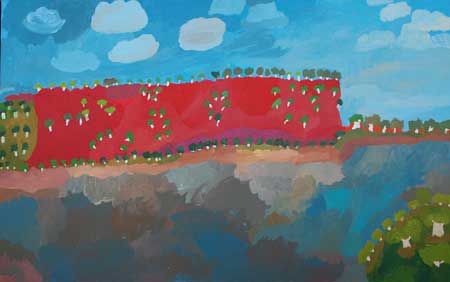 Inkamala though avoids all narrative detail. There are no people depicted, no intrusive roads or buildings, not even any animals.  She summons up in her mind’s eye and then loosely brushes in, as large areas of (mostly) flat colour, a great sunlit spaciousness in which tree-studded mountains sit lightly or even seem to hover beneath the big dome of sky, unhinged from time. The water-bodies she evokes also seem to have a slippery weightlessness. This is even more the case with the large painting as water seems to be lying across the land in the foreground, reflecting the sky above, and Central Mount Wedge floats like a great ship on the horizon.

If Inkamala’s work stands out from the rest of the Tangentyere showing with its other-worldly character, creatures of the other world materialise in the work of Yarrenyty Arltere artist Rhonda Sharpe. Her multi-plate etchings are riveting representations of totem figures, brilliantly stark in their single rich colour – one red, one yellow – and remarkable for the fluidity of their drawing. She returns to the theme in two soft sculptures, with more decorative yet no less striking results. 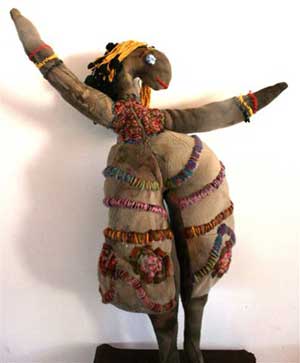 At first I thought that Marlene Rubuntja and Sally Rubuntja’s multi-plated etching and similar soft sculpture might also evoke a spirit or mythical figure but their titles seem to suggest a woman of the here and now – earthy, exuberant and above all proud. The pair have also worked together for the very touching No Longer a Child and Sometimes it’s Hard. In contrast to the earth-bound maturity of their Woman with Arms up because she is Proud (at left), they’ve conjured something of the restlessness and intensity of youth in this piece.

The expressive qualities of the Yarrenyty Arltere soft sculptures are remarkable. You can almost hear Tristam Malbunka’s little dogs yapping (though their shop-bought eye buttons are regrettable) just as you can almost feel the beating heart in the plump breast of Dulcie Sharpe’s Golden Bird (below right). In this and other work, such as Rhonda Sharpe’s Beautiful Bird, and Louise Robertson’s Head, the fine attention to detail in the embroidery and applied decoration stops skillfully short of too much.

Marlene Rubuntja, a leading figure at Yarrenyty Arltere, has spoken about wanting men to engage with sewing and it certainly suits Tristam Malbunka. But it is great to see in the current show work in metal by Roland Ebatarinja and Nick Chulung. There’s a huge Goanna sculpted by Ebatarinja outside the entrance to the gallery and inside a number of two dimensional works in laser cut metal. I’ll look forward to seeing more from them. 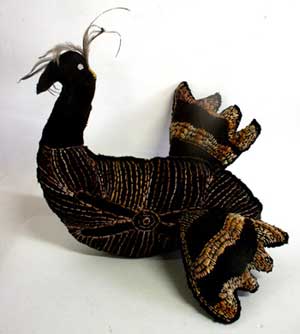 So, there’s an obvious difference in media between the two art centres: the Tangentyere showing is all painting (on linen, board and a few on pieces of found metal), while the Yarrenyty Arltere work is mostly sculpture and no painting at all. But there’s also a difference  in focus and mood: there’s a documentary quality to much of the work by the Tangentyere artists, some of it sober, some of it more light-hearted, affectionate but still in contrast to the playfulness, the sheer imagination of much of the work of the Yarrenyty Arltere artists. Together the two bodies of work offer a rich insight into life in all its diversity on the town camps.