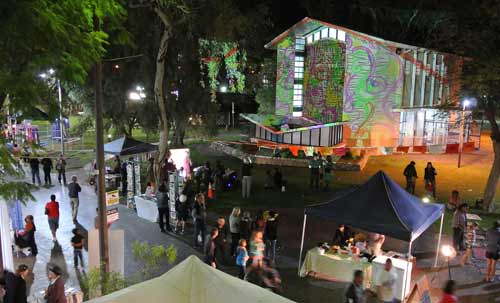 The town centre is turned into a place where locals mingle and visitors are welcomed.
Concerts are held for 3000 people.
Beautiful spaces take the place of ugly car parks.
The Mall no longer turns into a sinister ghost town when the sun sets, and where tourists are warned not to go.
Anti-social behaviour no longer flourishes in this void.
The place is buzzing with people living right there, in 60 or 70 apartments in the heart of The Alice, marketed through pre-sales and built to order, from one to three bedrooms.
Pie in the sky? It’s closer than you think.
It may be a brave call, given that the Melanka block and the old Commonwealth Bank site in Parsons Street are still in limbo, but the Town Council and the Uniting Church are pushing the project.
It would halt the town’s doom and gloom, says the chairman of the Uniting Church Property Working Group, Bruce Walker. It would be a development that celebrates not only what the town has been, but what it will be, “a place that welcomes locals and travelers”.
The central point is the three blocks of land the church owns in the Mall – Adelaide House, the old manse now used by an Aboriginal employment service, and Flynn Church.
A generous 25 year agreement with the Town Council ended last year. It gave public access to the grounds, to walk through to Hartley Street, past the historic school there, to the Yeperenye Centre.
The grounds of church blocks became a place to sit down on the lawns, and for kids to play.
But with growing “social disturbance”, as Dr Walker calls it, and economic changes for the worse, the church’s $4m asset turned into a liability: “The broken panes of glass, the coping falling off the verandah, the cleaning of the grounds, the need for painting, it was sending us broke.
“$2.50 for a cuppa and a scone from a flagging tourism market just isn’t enough.”
The option clearly was to put up the shutters – as so many others in the CBD had done.
Dr Walker, for decades the driving force behind the Centre for Appropriate Technology and Desert Knowledge, and the church council went the other way: Let’s make the place tick, they decided.
They teamed up with the Town Council, solicited support from community organisations including the Chamber of Commerce, and asked the Federal Government for $15m from its Regional Development Infrastructure Fund in Canberra. Successful bids will be announced in July.
The council seems set to put in some money, and loans would make up the balance of a project worth in the order of $60m.
“If carefully managed this project can work,” says Dr Walker.
As much as possible of the land is intended to be used as public space, so the apartments, a key component paying for  the Alice Springs Meeting Place – that’s the name – obviously will need to go up.
“We believe we have a reasonable proposition the community will embrace,” says Dr Walker.
Stand by for the renewed clamour of those objecting to highrise. 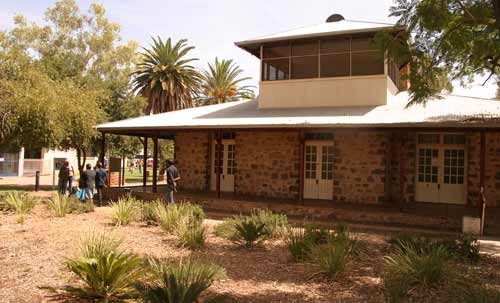 In Dr Walker’s view the town’s only new large building in recent times, on the former block owned by Lizzy Milne, next to Kmart, is “a bad outcome from a height limitation policy”: lt stretches from boundary to boundary, no open spaces there, because with a three storey limit that’s the only way the owners can make the development work.
The town’s past built heritage – its first hospital (Adelaide House), Hartley Street School, the Residency – are as crucial to the project as its evolving role in the region.
Between the 2006 and 2011 census counts, 66% of the population “turned over,” says Dr Walker.
There are now as many African and Indian people living in Alice as there are Aborigines.
We’re a supply centre for 260 bush communities.
And tourists as well as fly-in, fly-out workers are using the town’s facilities without paying council rates that maintain them.
So a financial stimulus is as badly needed as is confidence in the future of The Centre.
Dr Walker says the project would bring to fruition recommendations contained in a string of government and other reports, and prior public consultation, and work in with the current upgrade of the northern end of the Mall.
The Uniting Church isn’t a novice in commercial enterprises with an altruistic motive: in Darwin it owns the two blocks on which the Mitchell Street shopping centre stands, and next to the church in Darwin’s centre it built a supermarket now rented by Woolworths.
“The returns from these investments support the work of the church throughout the Territory,” says Dr Walker.
What will the Alice Springs Meeting Place do for the community?
“Let’s make up our mind what we want Alice Springs to be like in 50 years time. And then let’s get to work and make it happen.”
PHOTOS, from top: Flynn Church during a night market and with “video architecture” projection during last year’s Alice Desert Festival. •Adelaide House.

By ERWIN CHLANDA History was made in the Bungalow, now better known as the Overland Telegraph Station, as the place where taken-away children were interned,...
Read more